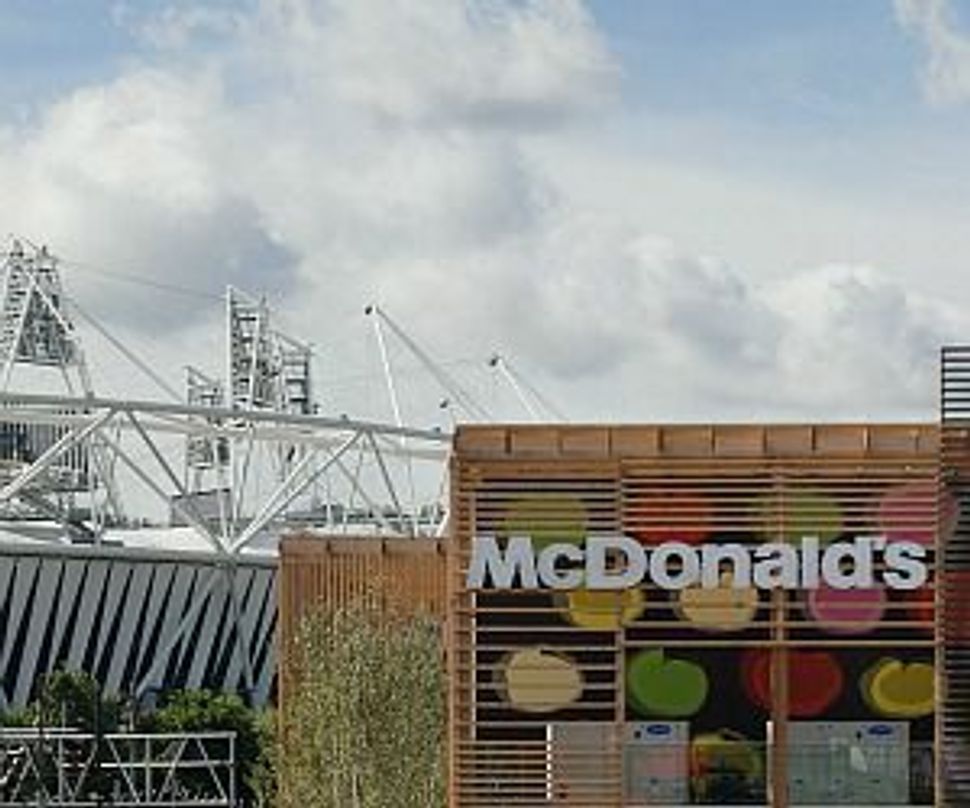 If you are lucky enough to have snagged a ticket to the Olympic games, which start tomorrow, you’ll likely see McDonald’s everywhere. The company is a major sponsor of the games and is providing 20% of the food served at them. But if you keep kosher, you’ll have to keep walking.

More than three years ago, the Jewish Committee for the London Games (JCLG), set up to coordinate UK Jewish community activity at the Olympics, called for kosher food stands to be provided by McDonald’s — given their experience with a “large number of outlets in Israel, a considerable number of which are kosher.” McDonald’s resisted plans for any special Olympic provisions.

In spite of this, and the reams of the Committee’s strictures dictating everything from use of the words “Summer 2012” to who can sell French fries (only McDonald’s), the Olympic organizing committee is striving to promote this year’s games as all-inclusive. In 2008 they established a faith reference group, with representatives from the nine religions in the UK Interfaith Network. The aim was to “advise on issues around faith in order to cater to the observations of practicing athletes, spectators and officials.”

The JCLG played a role in 18 months of research, analysis and consultation from which emerged the Olympic “food vision,” a working document “celebrate the diversity” of the UK’s cultures and cuisines via the anticipated 14 million meals that will be served in the Olympic Park and Village this month.

According to the “vision,” all produce served at the Olympics — meat, vegetable and cheese — must be Red Tractor Assured. But as the document notes, “kosher meat [is] subject to very specific preparation requirements…not currently available under the Red Tractor Assured scheme.” Instead, kosher food, where used on the Olympic site, must be prepared in conjunction with the Beth Din.

Rabbi Mendel Cohen, director at Chabad of Shoreditch in East London, said that he met with the main Olympic catering contractors “to discuss the different kosher food options and kosher requirements.” Although there would be no kosher kitchen for the athletes, he explained, kosher food would be available for any that requested it. Warm kosher lunches, “with a special nine day non-meaty option” would be available to both athletes and the general public, for purchase at the various Olympic venues across the east of the city.

A spokesperson from the Olympics press office was “confident that we have made provisions for spectators who follow Halal and kosher diets,” and certainly the BBC reported back with good news. In the Olympic Village, where 16,000 athletes and coaches will settle, a media preview of the dining area revealed “rows of serving counters under colorful signs proclaiming a commonwealth of catering such as Indian, African and Caribbean, halal, Mediterranean, kosher.”

If you’re still concerned about the availability of kosher food, you may decide to eat beforehand at a certified kosher restaurant elsewhere in London — the JCLG has set up a website welcoming and guiding Jewish visitors around the city. Or you may resort to the impeccable and traditional standards of a packed lunch — just don’t bring “excessive amounts of food” (there’s a restriction on that too).