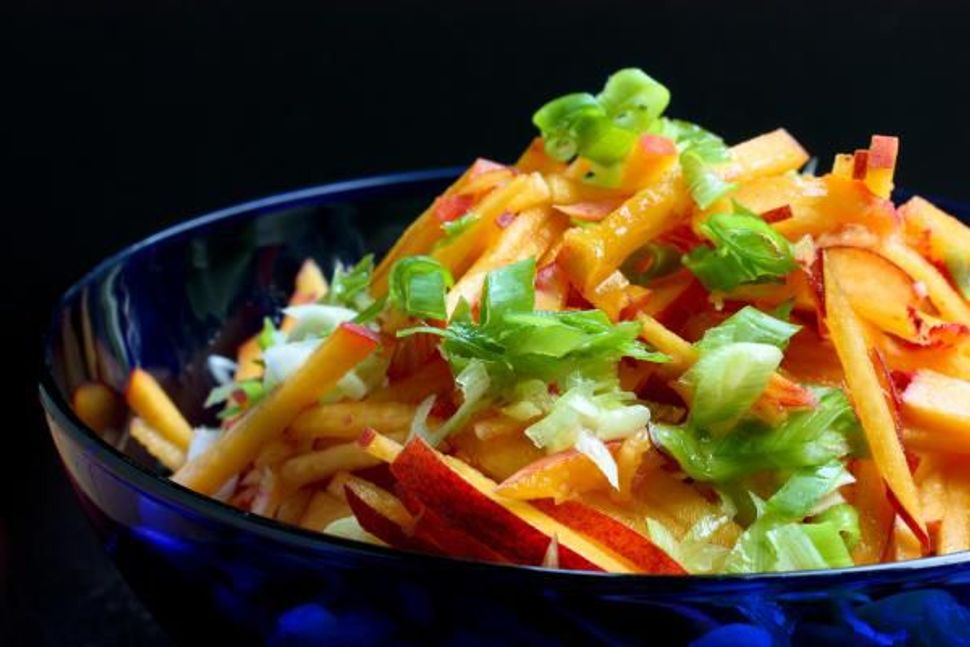 I am incredibly spoiled to have a wonderful produce store just a few miles away, with a delectable array of organic fruits and veggies all year long. I always return home with much more produce than we’ll be able to eat, because I can’t resist their visual beauty and fragrances. Having access to so much fresh and organic produce has meant that we put off becoming a CSA member, that is, until a local CSA rep knocked on our door. Her earnest pitch and the sense of joining a larger community encouraged us to try it out.

Now, before I even drink my first cup of coffee, I leap out of bed eagerly on Thursday mornings to peek inside the box and behold what nature’s bounty awaits me. I always thought that I ate a varied and balanced diet (being originally trained as a public health nutritionist), until our CSA box began appearing at our doorstep. Almost every box brings something I’ve never cooked before, which sends me off in excitement looking for the perfect new recipe. A package of endive turned into a delicious hors d’œuvre stuffed with parmesan cheese, chopped walnuts and herbs. The shishito peppers (from Japan!) became an enticing side dish, simply cooked in hot oil until the skin began to blacken.

One of our recent boxes revealed a treasure of peaches and pluots. It’s been a great summer for stone fruit in California; last year’s crop, especially plums and pluots, was sparse due to strange spring weather. So, we’ve been gorging on juicy fruits the past month or so. When this box arrived, the fruit was still slightly firm, not quite ripe. I was intrigued to explore other alternatives. I have to admit that in addition to our many shelves of cookbooks I am a devotee of epicurious.com, and I turned there first. Who would have imagined that I’d find a recipe for Stone Fruit Slaw?

My mouth went “pop” with the first bite — sweet and tart and spicy, all at the same time, and a great accompaniment to the quesadilla we were eating. We’ve made it several times since then, each time slightly different, depending on the fruits at hand. How inspiring to think of fruit from a new perspective!

Being part of the CSA has deepened my sense of connection to all the people who work on the land, bringing me this delicious abundance of produce. I look forward to reading what’s happening on the farms, going to events there, and hearing news about the families; I know that I have a direct stake in their success.

Although we usually think of food purchases as a business or commercial transaction, I’ve come to appreciate how participating in a CSA is similar to Maimonides’ 8th Level of Tzedakah: “The highest level of tzedakah is when you support someone by giving them a gift, or a loan, or enter into a partnership with them, or create a job so that they can support themselves.” Maimonides, Mishneh Torah 10:7-1. It’s my obligation to make sure that they receive a fair wage, have safe working conditions, experience a sense of dignity, and that the land is treated respectfully, so that it’s sustainable for future generations to also partner with it.

The experience that inspired me to found Fair Trade Judaica was buying a shawl (that I made into a tallit) at a fair trade store in Kathmandu, Nepal; there was a photo and a thank you note attached from the artisan who wove it for me. Even now, years later, every time I wear my tallit, I think of her. I hope that her life has improved and that she has been able to create f life of dignity for herself and her family. Since joining the CSA, I now have that same connection with the farmers who grow my food.

1) Whisk first 6 ingredients in a medium bowl.
2) Add fruit and scallions; toss gently to coat.
3) Season to taste with salt and pepper.

Serves four to six. You can make many variations depending on the fruit you choose; it makes a beautiful dish to have different colored flesh and skins; I usually use white and yellow peaches and/or nectarines, as well as dark plums. It’s best to mix the fruit and dressing just before serving so it stays crisp; the dressing can be made a day ahead of time, and the fruit cut a few hours ahead.

Ilana Schatz is the founding director of Fair Trade Judaica. She lives in El Cerrito, CA and loves to hike, restore their backyard to its original oak tree habitat, and make wine from the eight plum trees in her garden.