No Guki: A Vegetarian in Korea 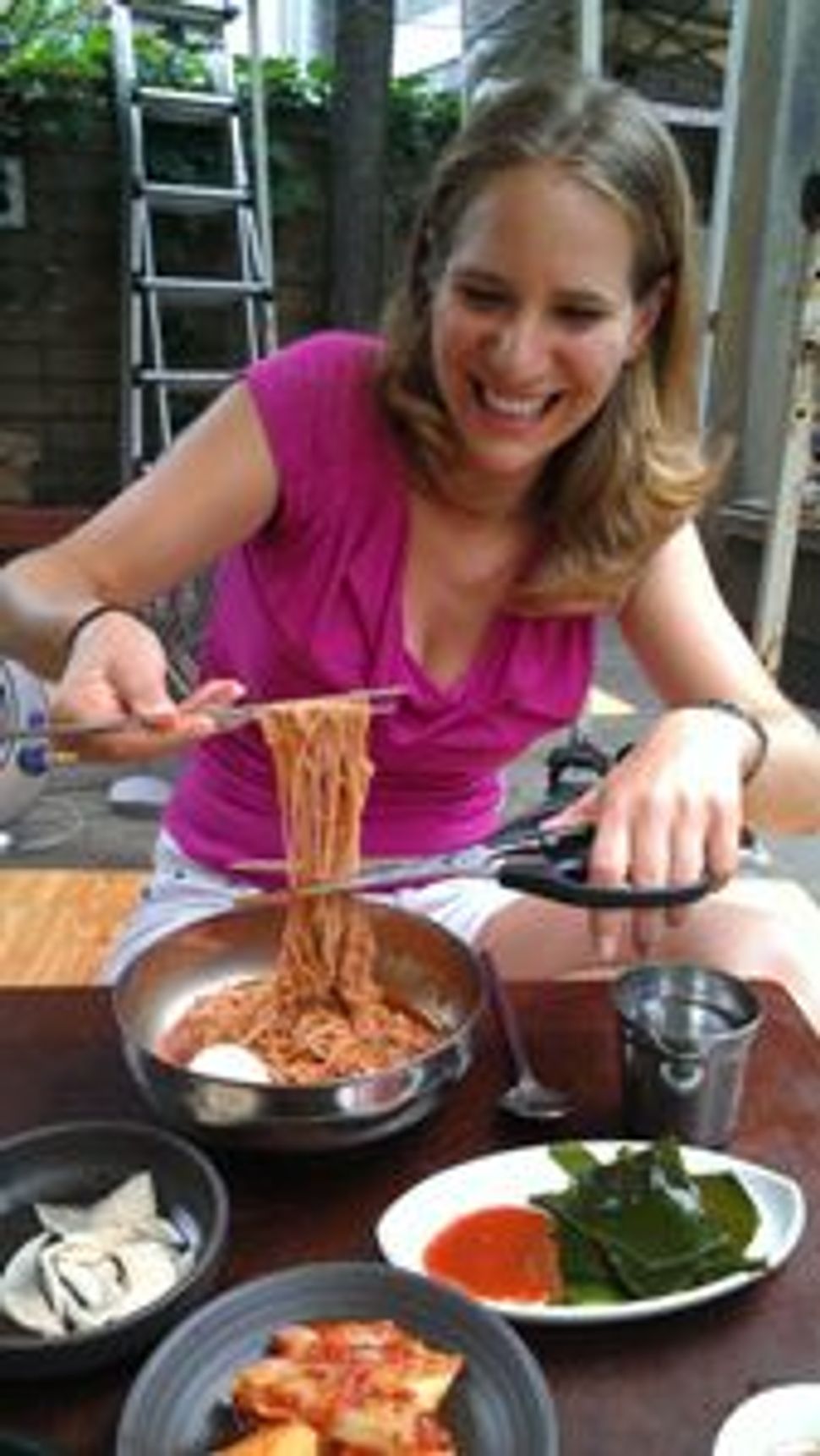 You can?t tell from the picture how spicy this was! Image by Seth Young 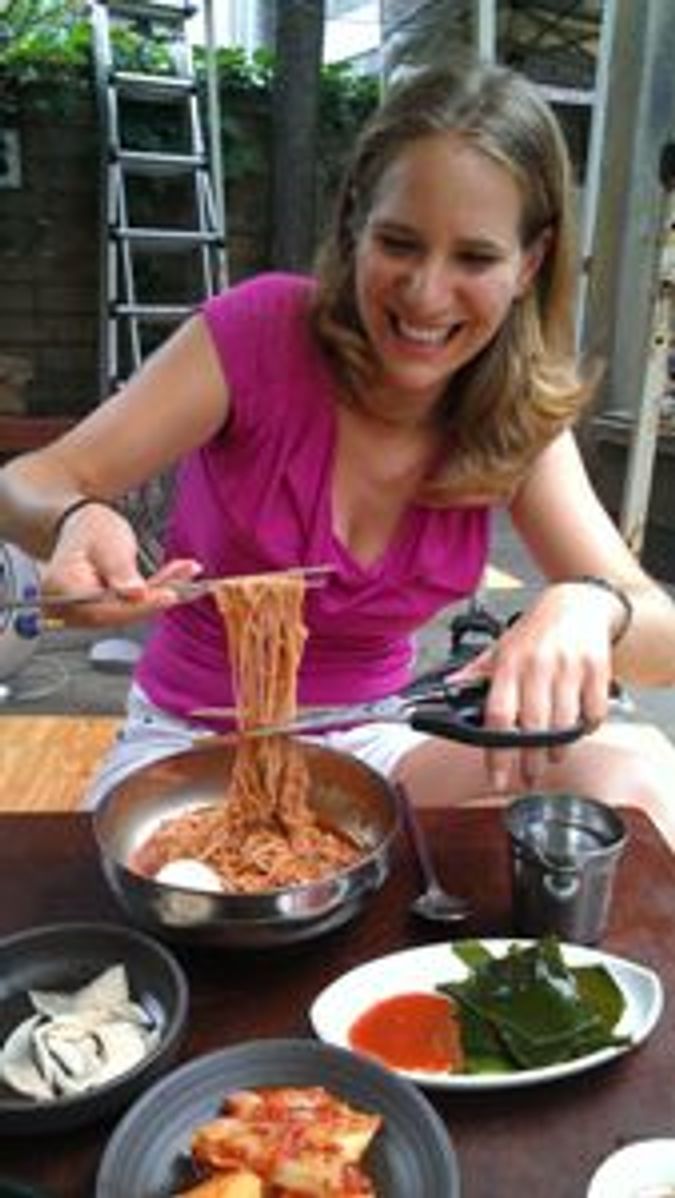 You can?t tell from the picture how spicy this was! Image by Seth Young

When I became a vegetarian in 1994, at age 12, no one knew how to deal with me. It was confusing and difficult to explain to my friend’s parents that I don’t eat meat, especially because upon explanation they would offer to make me chicken. It gets even a little more confusing, for those unfamiliar with vegetarianism, because I do eat fish. But by the time I entered college, a larger part of society had joined me in my no-meat diet. There were more vegetarian options in restaurants, and hosts finally realized that as a vegetarian I wouldn’t eat meat, OR chicken. I found it easier to be a part of my community.

Food is an integral part of every community. I know this first-hand because I have had the privilege of travelling to many different types of communities from Australia, to Israel, Costa Rica, Panama and Mexico, and 35 of the 50 states. My first thought when I go somewhere new is inevitably: What am I going to eat? To be on the safe side, I usually learn how to say “vegetarian” or “no meat” in the local language before I go. I’ve learned ‘tzimchonit’, Hebrew for vegetarian; sin carne–without meat in Spanish; and ‘no meat for me, mate’ in Australian. With these few phrases I have happily consumed delicious fish and veggies all over the world.

Recently I had the incredible opportunity to go to South Korea for a full week. I practiced saying “Chaeshick-chu” and no “guki” aloud for weeks (Vegetarian and no meat in Korean). When the plane took off I felt prepared!

In the American view, South Korea is a “vegetable heavy” country. When you eat Korean food in the States, you get an array of vegetables with every meal. Each meal comes with beets or turnips, and a Korean specialty called Kimchi (pickled cabbage) on the side. In Korea, each main dish does include a variety of different of veggies but they also nearly all have meat as well. Whether pork, beef or sometimes chicken, meat is an important staple in the Korean diet. In fact, meat is such an important staple that when I would request “no guki” (no meat), they assumed I only meant red meat and would pile on the chicken, just as my friends parents had all those years ago.

We would arrive at a restaurant, immediately look at the menu and confirm that there was something I could eat, and this was only possible if the menu was in English. Usually it was no more than noodles. Sometimes I would order a vegetarian item on the menu and there would be beef added. I became anxious before each meal, my boyfriend, who was my travel companion, was equally as frustrated, we were constantly unable to find a place that I could eat. You could feel the anxiety starting when one of us got hungry, the search of a place I could eat. Sometimes there were pictures, and I could point to what I wanted hoping that I could ultimately eat whatever was brought to me. Sometimes I ate the only vegetarian item on the menu, which would be very spicy and hard to digest.

For me, being a vegetarian in Korea I felt I could finally identify with my friends and colleagues who keep kosher while they travel and how difficult it can be to have food restrictions that no one around you understands. When I didn’t have access to healthy foods, it made me think about our own broken food system right here in America and to really experience firsthand a very small glimpse into what it is like for people in communities without access to food. I was certainly not starving, but I felt less than my best because I wasn’t getting the proper nutrients. It makes me proud to work at Hazon and to be in the forefront of the new Jewish food movement. I know that the work we are doing as an organization will ultimately effect communities, creating opportunities for people to eat.

Going to South Korea was an eye opener for me. I felt I was immersed in the culture in a lot of ways, but ultimately by being unable to eat the local cuisine, I was unable to feel a part of their culture. Food is what ultimately brings people together, and creates a community. Offering someone food to nourish them creates a level of comfort for both the host and the guest, this was one of the most difficult elements with my culinary restrictions. I hope to never experience this again, but also somehow grateful to experience what so many experience everyday of their lives.

Wendy is originally from Long Island, is a graduate of the University of Massachusetts sport management program and has planned and organized over 100 conferences and events, including playing a major role in Hazon 2012 Cross-USA Ride from Seattle to Washington DC.

No Guki: A Vegetarian in Korea