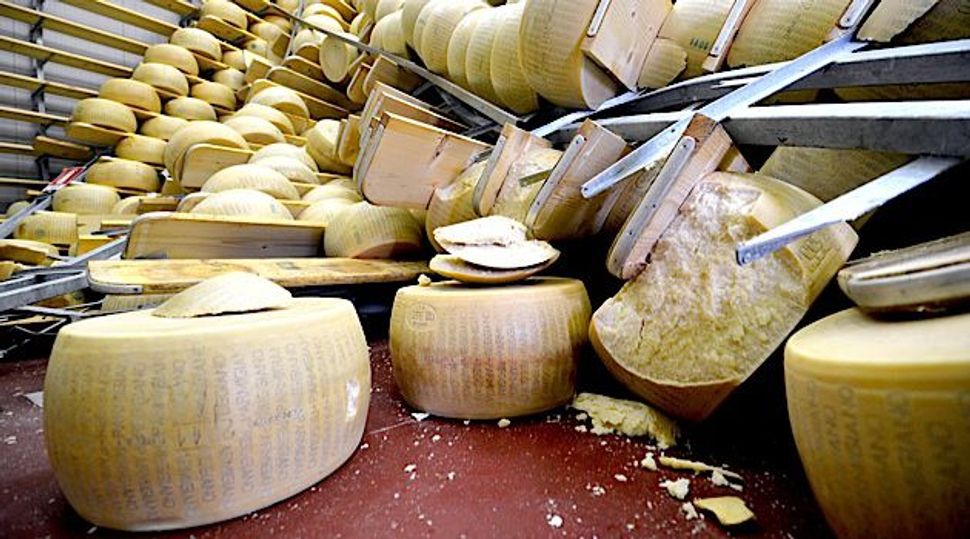 Wheels of Destruction: During an earthquake in Italy earlier this year, wheels of Parmigiano Reggiano came tumbling to the ground of warehouses where they were maturing. Image by Getty Images

On May 20, a devastating earthquake hit Emilia-Romagna, a region in northern Italy. More than 600,000 wheels of Parmigiano Reggiano fell from shelves where they were aging and ended up broken and humiliated on the floor. Since then, consumers, nonprofit organizations and businesses have made an extraordinary effort to ensure that the damaged wheels don’t go to waste and that producers and dairy farmers don’t go out of business. It’s as if the entire region is chipping in to keep alive the centuries-old process of making what the Italians call il re dei formaggi — the king of cheeses.

Today you can’t find a single piece of kosher Parmigiano-Reggiano anywhere in the world — but it’s not because of the earthquake.

The last kosher Parmigiano operation ended several years ago in Reggio Emilio, a small town between Parma and Bologna. “My family started the business at the beginning of last century,” Irma Fanticini, 89, told me recently. “My son Piero represents the third generation of professional cheese makers. He is named after his grandfather, who started the factory in 1907. Even before this, his family had been producing homemade cheese for centuries.”

Fanticini explained: “We decided to make Parmigiano for Jews. Once in a while a rabbi came with a special rennet, and he controlled everything.” But when Irma’s son retired a couple of years ago, the Fanticinis sold their cheese factory, and the new owners stopped making kosher Parmigiano.

You may have seen kosher parmesan in the supermarket, so let me clarify. Parmigiano Reggiano should not be mistaken for its distantly related cousin, the generic “parmesan” — and certainly not for “parm” (whatever that is). For Parmigiano to be authentic, it must carry a Protected Designation of Origin certification. The certification, like the one used to protect Champagne, guarantees that the cheese is produced exclusively in the region of northern Italy where it was first developed. Here, cows are fed on locally grown hay, which infuses the milk with a unique flavor. And cheese makers continue to use the same methods to make and age the cheese as their forbears have for centuries.

So why haven’t others followed in the Fantacinis’ footsteps?

The cheese poses one of the more complicated challenges in the kosher culinary canon. In order to get the PDO certificate, Parmigiano must be produced using milk and calf rennet (stomach enzymes) — mixing milk and meat, or so it would seem. However, “the fact that the rennet derives from the stomach of an animal does not make it meat, because in the process of producing it, it becomes something different,” explained Elia Richetti, president of Assemblea Rabbinica Italiana, the Council of Italian Rabbis. So, while it’s not mixing milk and meat, the rennet must come from the stomach of a kosher slaughtered calf.

The people of Emilia Romagna have been making Parmigiano since the Middle Ages and are understandably protective of their secrets and ingredients. It is not easy to persuade these cheese makers, who are sons and grandsons of cheese makers, to accept as an ingredient an enzyme that’s produced by a rabbi, and whose quality they cannot really control.

So do Italian food lovers who keep kosher have to give up the king of cheeses, or, even worse, prepare themselves to settle for a cheap imitation? Per carità!

Parmigiano has a very close, and almost equally tasty, relative: Grana Padano. The only differences are less-strict regulations on what the cattle can eat and a shorter maturation time, creating a slightly moister cheese.

For the past 15 years, kosher-keeping Italians and cheese aficionados have feasted on a kosher version of this cheese, thanks to Piacenza’s Gran Duca Colla. The factory was founded by Giuseppe Colla in 1921 and continues to ensure that a kosher run is completed once a month.

“I go to the cheese factory once a month with kosher calf rennet…Nothing changes in the kosher production other than the rennet used,” explained Rabbi Shalom Elmaleh, who certifies the cheese kosher.

After the rennet is mixed in and the cheese formed, the wheels are placed, like Parmigiano, on a shelf to mature. As they age, they build a delicious and robust flavor to be enjoyed with bread or sprinkled over pasta.

Since Grana Padano is the best substitute for kosher Parmigiano, we hope these wheels don’t end up on the floor.

Rossella Tercatin is a reporter for Pagine Ebraiche, the magazine of Italian Jewry.