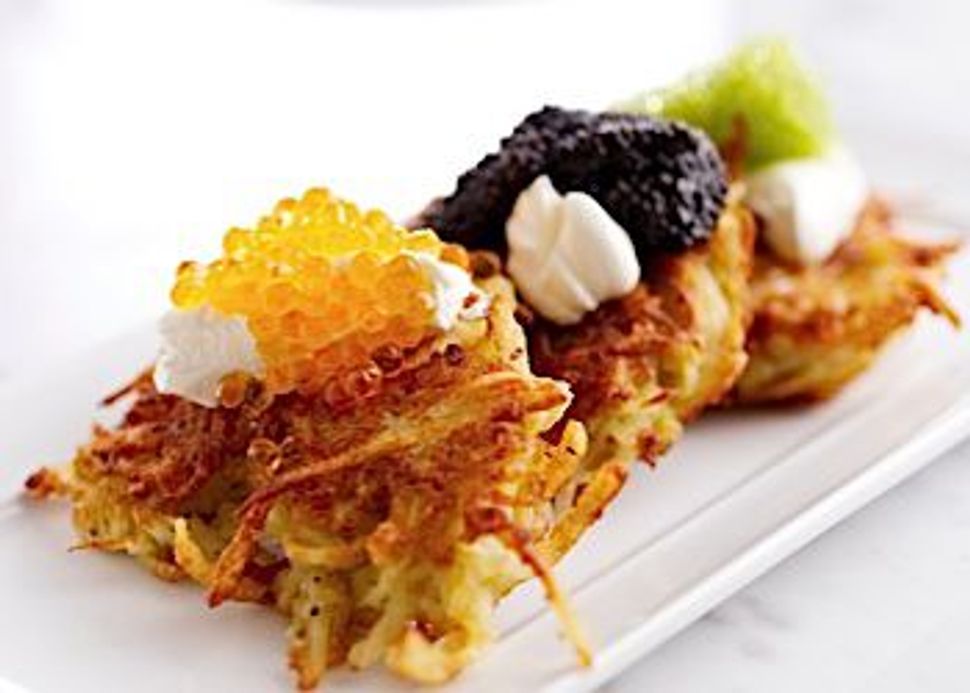 Latkes are topped with caviar at Kutsher?s Tribeca. Image by EVAN SUNG

Whether the thought of cooking another kugel drives you insane or you’re just too far away to go home for the holidays, these restaurants have your back in the tastiest of ways. While some chefs have opted to go the more traditional route by doing their best to recreate one of grandma’s meals, others use the holiday as an opportunity to strut their stuff and put their own gourmet twists on old favorites. If you’re having trouble deciding where to eat, look out for our “Critic’s Picks”

Artisanal Formagerie and Bistro Critic’s Pick!
Gouda matzo balls anyone? For an entire week, Artisanal Formagerie and Bistro will offer a French-influenced cheese-centric holiday menu that can be ordered à la carte, as a prix fixe, or to take home. Entrees include a seven-hour brisket with carrot kugel and cold poached salmon served with latkes and horseradish sour cream. Desserts like challah pain perdu and an apple tarte with cheddar cheese crust are sure to ring in a sweet and cheesy new year.
Details: September 16-23. 3-course prix fixe $47 pp, 4-course prix fixe with cheese flight $58 pp. 2 Park Avenue. (212) 725-8585.

Kutsher’s Tribeca
For a restaurant that describes itself as a “modern Jewish American bistro,” it’s no question that a fresh take on High Holiday favorites is in the cards. Latkes all dressed up with local apple compote and caviar will be served as a first course to a number of different entree options, including Creekstone Farms beef brisket and the veggie friendly wild mushroom and fresh ricotta kreplach.
Details: September 16 and 17, seatings at 6pm and 8:30pm each night. $85 pp for adults, $50 for children under 10. 186 Franklin St. (212) 431-0606

Brasserie Julien
This Upper East Side spot will be offering an extensive menu (à la carte or prix fixe) with all of the old standbys and then some. Dishes include tender marinated smoked herring, matzo stuffing with mushrooms and caramelized onions, and rainbow trout grenobloise.
Details: September 16 and 17, $39 pp. 1422 3rd Avenue. (212) 744-6327

Talia’s Steak House Enjoy an outdoor celebration (weather permitting) at Talia’s Steak House, where the offerings include three pre-paid prix fixe menu options for both lunch and dinner. Steak, chicken, and salmon are available on all dinner menus, while schnitzel, burgers, and kebabs will be among the lunch options.
Details: September 16 and 17, dinner seatings at 5pm and 8pm, $31/$42/$54 pp. Lunch: 11am-5pm, $25/$38/$49 pp. 668 Amsterdam Avenue. (212) 580-3770

The Jolly Fisherman
For the Long Island crowd, the Jolly Fisherman is slinging matzo balls, latkes, and two kinds of fish — Atlantic salmon with a macadamia nut crust and fillet of lemon sole. Dessert offerings include ice cream cake and fruit cobbler a la mode.
Details: September 16 and 17. $39.95 pp, $19.95 for children under 12. 25 Main Street, Roslyn. (516) 621-0055

The Bagel Critic’s Pick!
Though this trusty Chicago favorite is getting decked out in white tablecloths for a candlelit dinner, the old school fare is fitting if you’re craving bubby’s cooking. The prix fixe menu, which requires a reservation of at least 10 people, includes a relish spread with pickles and sour green tomatoes, chopped liver, and gefilte fish. Entree choices include broiled Lake Superior whitefish, brisket, and sweet and sour meatballs.
Details: September 16 and 17, seatings at 5pm and 7:30pm, $32 pp and $15 for children under 10. Prepay is necessary. 50 Old Orchard Center, Skokie. (847) 677-0100

Wildfire
Challah with apples and honey and vegetarian chopped liver will kick off this meal, which can be ordered family style for parties of 6 or more. Mains like apricot glazed chicken breast and salmon with lemon and capers will be served with kugel and carrot tzimmes. End the meal on a sweet note with homemade honey cake, flourless chocolate cake, or a glazed apple tart.
Details: September 16, 3pm-9pm, and 17, 11am-10pm. $39.95pp, $26.95 for children 12 and under. 235 Parkway Drive, Lincolnshire (847) 279-7900; 1300 Patriot Blvd, Glenview (847) 657-6363

London Grill
This Philly gastropub will put their mark on a Rosh Hashanah feast with horseradish crusted salmon, brick chicken, matzo ball soup, and brisket. Wash down your meal with a craft beer or two from their lofty selection.
Details: September 16 and 17 during dinner service. $28 pp, $14 for children. 2301-2303 Fairmount Avenue. (215) 978-4545

Chompie’s Arizona’s favorite New York-style deli will be cooking up challah stuffing to accompany roasted chicken with a honey apricot reduction and roasted turkey breast with gravy. Gefilte fish, matzo ball soup, and crispy latkes are just a few of the classic sides and appetizers that will be offered as well.
Details: September 16, 5-8pm, $26.95 pp, $12.95 for children 10 and under. Various locations.

[Le Bistro][13]
This French bistro that once made an appearance on “Kitchen Nightmares” (and, according to Yelpers, has since made a turnaround), will be serving stuffed cabbage, turkey roulade with apple raisin stuffing, and grilled salmon with fingerling salted chips and cucumber salsa. Red berry blintzes and granny smith apple strudel will close out the meal. Don’t forget to request the complimentary sweet wine!
Details: September 16 and 17, $35 pp, $15 for children 12 and under. 4626 N. Federal Highway, Lighthouse Point. (954) 946-9240