Not Outraged? You’re Not Paying Attention! 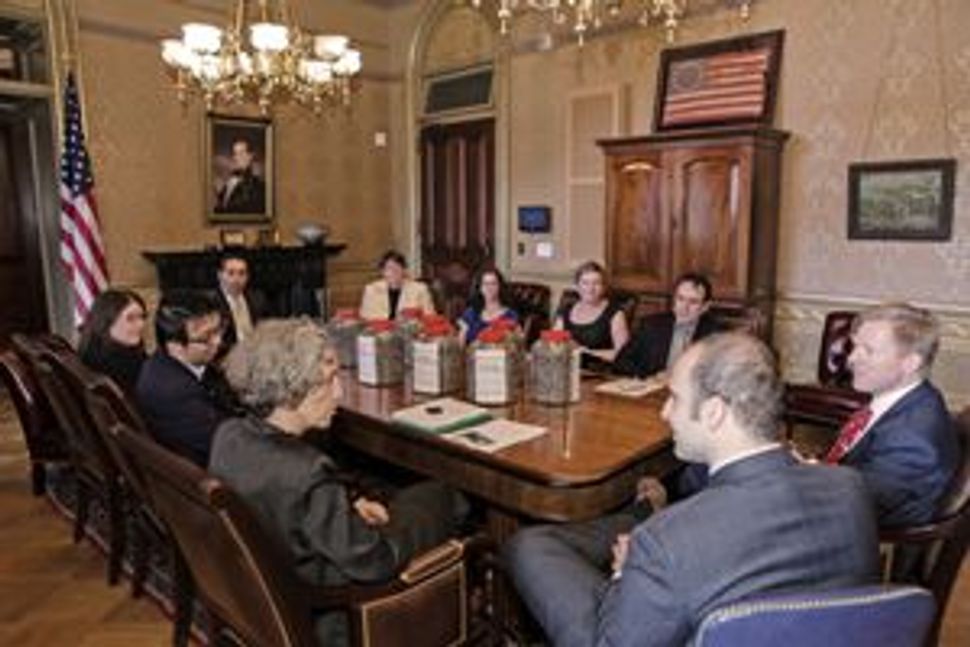 If you’re Jewish, and into food, and not outraged, then you’re not paying attention.

Americans like to think of ourselves as a generous people, and we are – even though special interests transform much of our international food aid programs into a wasteful boondoggle that undermines the abilities of communities and countries in Africa, Asia and Latin America to feed themselves. And that’s what’s happening now. Food aid is critical and important, but for it to work, it needs to work right, and right now, not enough of it is.

Here’s why: if children are starving in part of Ethiopia, it makes sense for US aid dollars to buy food from farmers close by in other parts of Ethiopia or neighboring countries. Buying locally develops and sustains local agriculture, and gets the food to those in need quickly. But instead current US law requires virtually all food aid to be bought from heavily subsidized US agribusinesses and shipped overseas. That means that more than half of every food aid grain dollar is wasted in subsidizing large companies and shipping costs and takes up to 14 weeks longer to reach hungry people than buying food locally. And it’s even worse than that, because sending free or subsidized US grain to developing countries such as Haiti can undermine local agriculture in the long-term, making future famines more likely, as communities are no longer able to feed themselves in the face of future shocks such as drought. Communities in which I have worked as a volunteer with American Jewish World Service are now far more vulnerable to hunger are a result of of subsidized US food dumped into their countries.

Fortunately enough, if you’re Jewish, and into food, and now suitably outraged, there is something you can do about it. For the past 12 months, Jewish advocacy has surged on the Farm Bill, the federal legislation that codifies into law much of what’s wrong with American food aid policy. Last December, there was an attempt to enact behind closed doors what the media called a “Secret Farm Bill” by including it in a much larger bill. When that bill collapsed under its own weight, legislators were forced to create a Farm Bill the old-fashioned way, through open debate and discussion. Jewish and other activists worked with allies in the Senate to pass a significantly better, more compassionate, and fairer version of the Farm Bill in June. So what made the difference between December and June? Organizing. Twenty Jewish organizations endorsed the Jewish Platform for a Just Farm Bill and more than 18,000 people around the country signed onto a corresponding petition. But we knew that petitions are easy, too easy for politicians to ignore without follow-up. Around the country, volunteers from the American Jewish World Service and other faith-based groups conducted 15 meetings with 10 key Senate offices in their home states, sent thousands of e-mails to congressional staff and also engaged in an innovative social media strategy to raise the issue’s profile.

In and of itself, sending e-mails and organizing meetings can’t move Congress. But the inequities of food aid are so compelling, and our current policy so outrageous, that defenders of the status quo find it difficult to actually argue the issue when it is forced out into the open. As Louis Brandeis famously argued, “sunlight is the best disinfectant.”

As a volunteer for AJWS, I participated in several meetings with Congressional staff in southern California. Interestingly, the staff I spoke were genuinely shocked when we explained to them how the US food aid system really works. We also pushed hard to win endorsements for a letter in support of the Senate reforms by House Agriculture Committee member and food justice advocate Rep. Marcia Fudge. We helped round up more than 40 signatures of support by fellow Members of Congress – the largest number ever garnered on this topic. And we have worked hard at backing up our lobbying by spreading the word, sending out [letters to the editor][10] to support those who have supported food aid reform.

This is all well and good but not enough: the House Agriculture Committee appears more concerned with special interests than fighting hunger, and it passed a version of the Farm Bill that actually increases the inefficiencies in the current program. And it gets even worse. The House Committee includes brutal cuts to food stamps for low-income Americans, while maintaining lavish subsidies to agribusiness. The Jewish Farm Bill Working Group – AJWS, [Hazon][12], [the Jewish Council for Public Affairs][10], the Religious Action Center of Reform Judaism, the Coalition on the Environment and Jewish Life COEJL and National Council for Jewish Women – is now focused on fighting to ensure that the House Agriculture Committee’s harmful provisions do not become law. And they aren’t the only ones. Many members of the House also oppose the version that came out of that chamber’s Agriculture Committee, which helps explain why there has been no open debate or vote by the entire body on the proposed bill.

So what will the Congress do now? Probably what it has done since the beginning of 2011: Nothing. Harry Truman famously ran in 1948 against the “Do-Nothing Congress;” but that body looks like a whirlwind of activity in contrast to today’s House of Representatives, where leadership has refused to move the process forward by scheduling a Farm Bill vote. The current Farm Bill expires on September 30, and it looks like Congress won’t do anything about it before a Lame Duck post-election session or maybe even until 2013, kicking the can down the road.

Such irresponsibility flies in the face of food justice and Jewish values, and it requires all of us to keep the pressure on Congress and to organize even more effectively than before. Please join me and thousands of Jewish food activists and visit AJWS’s Reverse Hunger website for more information about this important campaign. Please add your voice to the campaign by helping to organize a Global Hunger Shabbat program in your home community on November 2-3. If you are Jewish and into food, you’ll know that you are doing the right thing.

Dr. Jonathan Zasloff is a professor of law at UCLA Law School. A graduate of Yale Law School, Professor Zasloff has a keen interest in world politics; he holds a PhD in the history of American foreign policy from Harvard and an M.Phil. in International Relations from Cambridge University. He currently serves as a lay leader for American Jewish World Service in Los Angeles.

Not Outraged? You’re Not Paying Attention!