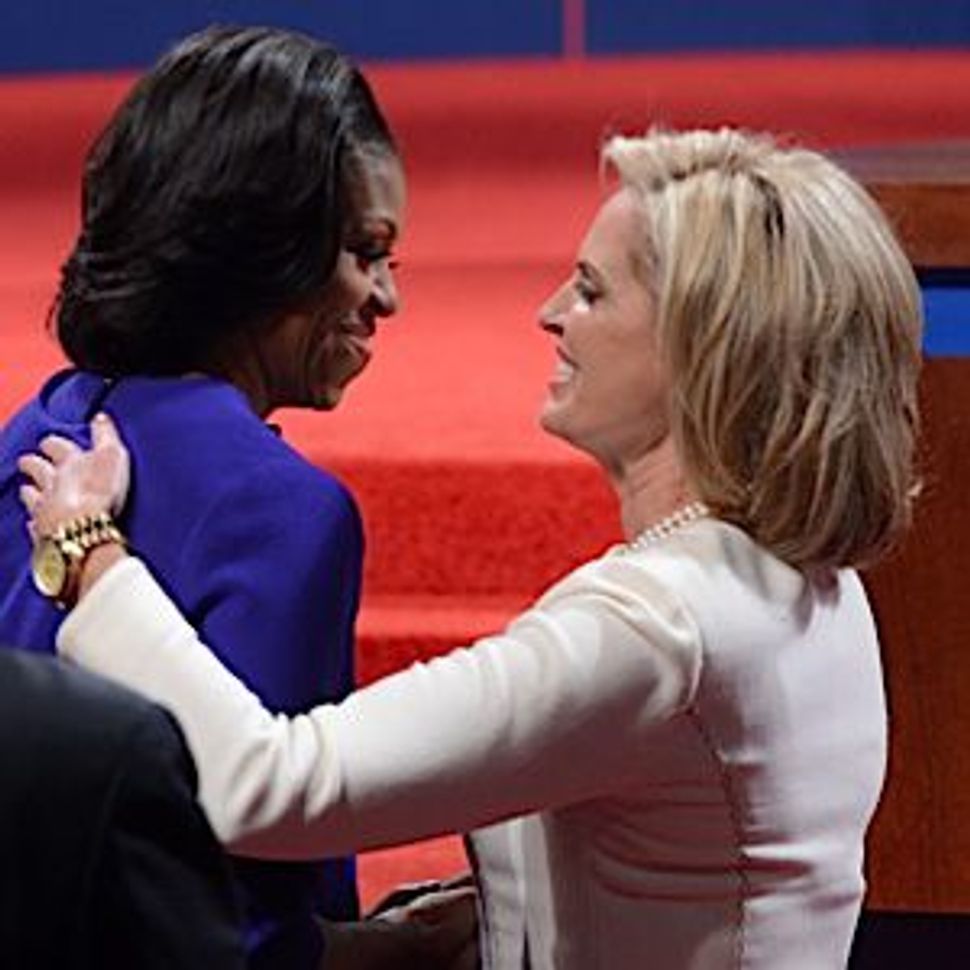 Did you hear that Michelle Obama won the presidential candidate’s spouse cookie-baking competition (sponsored by Family Circle)? Whether this news was or wasn’t on your radar, the cookie-baking competition was held yet again this election cycle. Indeed, despite some predictions that not using oats in her cookie would lose her the coveted prize, Obama emerged victorious with black-and-white chocolate cookies, defeating Ann Romney’s M+M cookies, avenging her loss to Cindy McCain’s oatmeal butterscotch variety in the last round.

It’s rare to diss cookie-baking on a food blog. Even for non foodies, cookies are fairly uncontroversial and baking them is generally agreed to be a fun activity, if sometimes messy. I’ve hardly ever met a cookie I’ve turned down, for instance, be it oatmeal or chocolate, molasses or sugar. Beyond that, baking cookies marks my calendar in lovely ways: my dad and I bake chocolate chip cookies together every year for Thanksgiving while mom and I bake meringue cookies annually for Passover.

All that being said, why in this day and age do we still demand this somewhat farcical activity from the spouses of our candidates? It’s symbolic of the entire troubling phenomenon that American still have very rigid gender expectations for our would-be First Ladies, more than we may even have for the women in our own homes and communities. It’s why Michelle Obama never mentions her hard-charging career, for instance.

Right now, it also may be that the idea of housewife and cook is playing a more significant cultural role due to the recession and the changing job market, with many families working strange and fluctuating combinations of jobs and hours; thoughts of a 50s style wife baking at home creates an illusion of cozy domesticity and order in a time of economic turmoil.

But the bake-off is not an actual throwback at all. Perhaps you thought this tradition was a hallowed one, that Dolly Madison, Mary Todd Lincoln, Mamie Eisenhower and other famous first ladies put on their oven mitts and squared off for the honor of the nation. They did not. Erin Gloria Ryan at Jezebel reminds us that the competition actually began when Hillary Clinton, defending her choice to be a career woman, asserted (oh, the horror!) that she did not have any interest in staying home and baking cookies. America was outraged and demanded justice. So, with the aid of Family Circle, the first bake-off was held in 1992.

Ryan writes that soon enough, the competition will be rendered obsolete:

Clinton won, natch, and the tradition continues to this very day. But why? With women ascendant in both parties, how much longer will Family Circle magazine gamely nudge the spouses of Presidential candidates back into the kitchen for some good old fashioned Mom-ing? Not every candidate will be married to an Ann Romney — someday soon, someone will be married to a Bill Clinton. The cookie bake-off’s days are numbered, because the all-male Presidential ticket’s days are numbered. To people offended by Hillary Clinton or Michelle Obama’s career choices, a man baking is probably more offensive to rigid gender identities than a woman not baking.

This is certainly true, but it’s also true that younger men are taking a more and more active role in America’s kitchens. Economic gender inequality may persist and women may still be stuck with too much of the housework, but for many Americans, foodie culture — as channeled via wildly popular cooking shows and gadgets in stores — has totally permeated our lies regardless of gender norms. Men are wielding oven mitts and women manning grills, and the trend is likely to continue. So let’s get with the times retire the bake-off and leave the cookie baking to our homes — or, of course, our food blogs.