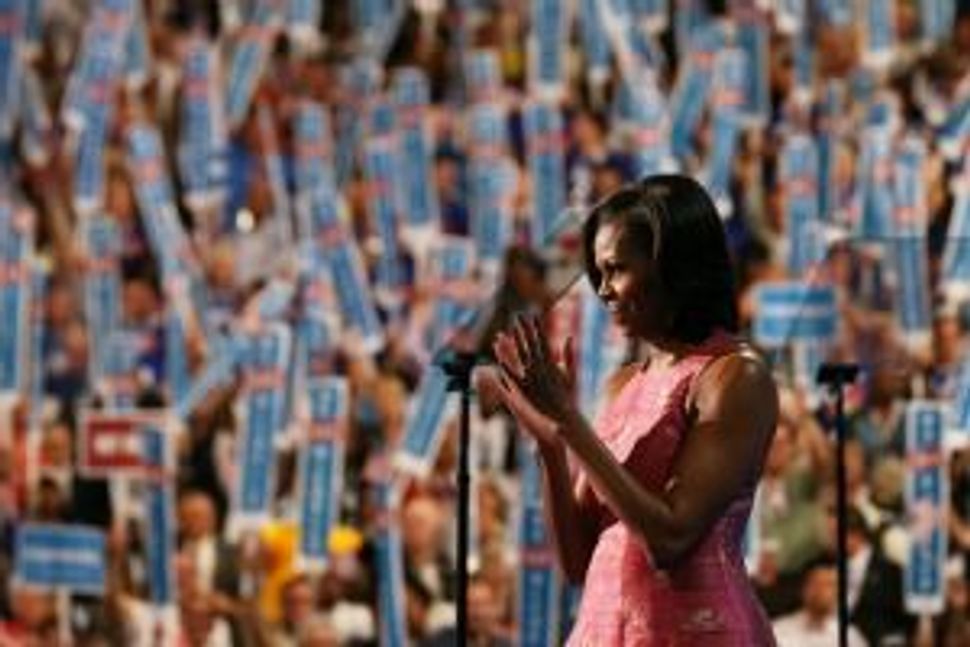 I expected the first night of the Democratic National Convention to be interesting, maybe even fun, and certainly worthy of skepticism. But I can’t say I expected it to be must-see TV.

I turned on CSPAN at the end of the workday yesterday, planning to leave it on in the background and get some extra work done at the computer or around the house. But just like Blair Thornburgh, my attention was immediately captured by the strong group of Democratic women from the House of Representatives (plus a few promising candidates) who stood together in an array of multicolored suit jackets and spoke with passion about healthcare, taking care of veterans, and reproductive freedom. As POLITICO rather bluntly put it before that group appearance:

Two black women, a Hispanic woman, an Italian-American woman, a Jewish woman and a war veteran will appear in the 7 p.m. hour in a bold-faced attempt to showcase the party’s women and diversity.

Little did I know, this moment was only the beginning of an unforgettable night. Stacey Lihn, whose daughter was born with a heart defect, spoke with a catch in her throat of how Obamacare had enabled her young child to stay insured. It’s hard to argue against a policy when a family is there explaining how it saved their child’s future.

And as Thornburgh noted, women like Tammy Duckworth, Lily Ledbetter and Nancy Keenan got up and — along with Governor Deval Patrick, San Antonio mayor Julian Castro, and former Ohio Governor Ted Strickland — delivered one “barnburner” after another, each of them making a convincing case not only for the party but at least a somewhat progressive worldview where taking care of people and giving them a shot isn’t considered entitlement — it’s fairness.

By the time Michelle Obama took the stage, I had given up all pretense of doing anything but sitting on the couch with my eyes wide and my mouth open. Where did this fiery energy come from in a usually conviction-lacking party? And how could the First Lady top a night of zingers about Mitt Romney’s overseas bank accounts, killer applause lines, and emotion-laden standing Os already?

Turns out, I had nothing to worry about. After a sweet introduction by a military mom, Michelle Obama came out and gave a speech that was universally acclaimed, even gushed over, by the corporate media and GOP commentators as well as her political allies. She spoke from the gut about her early life with her husband, and her relating of their genuine financial struggles made Ann Romney’s similar attempt to tell women she felt their pain seem laughable. Obama moved to a passionate defense of her husband as a man and politician, revealing her genuine fears about moving her family to the White House in 2008 and declaring that her faith in her husband then had been answered. She asked the country to give them another four years, and the crowd roared. By the time she finished, the cameras on all the network were zooming in to tear-streaked faces throughout the convention center. Jokes flew by on Twitter about how FLOTUS was backstage dropping all the mics in the building.

Michelle Obama’s speech, which some reports say she wrote herself, drew a contrast to Mitt Romney’s biography at every turn without even mentioning him once. It showed the canniness and intelligence of a Harvard-educated lawyer who met her husband while interviewing him for a job. Obama sent her points flying home under the guise of convincing the country of her essential mom-in-chief and loyal wife nature, calming down misogynists waiting to pounce. It’s the essence of her journey in the public eye. Obama has faced one of the most unenviable tasks in politics: hiding her formidable professional and political credentials from an America that has shown itself unwilling to accept a non-traditional first lady (particularly its first First Lady of color). And she’s passed that unfair test while — as this speech demonstrates — using her considerable intelligence to help strategically bolster her husband’s presidency.

So, while dressing sharp in cutting-edge fashions and focusing on issues like military families and healthy kids, she’s also become one of the most likeable and compelling figures in the country. Michelle Obama has done what so many women want to do, even if she’s had to play up one side of her personality and hide another to do it. She’s brilliantly and effectively neutralized an onslaught of patriarchal and racist criticism. Such a transformation shows genuine personal power, and as she herself said in her speech, the personal is political. I know she professes to be a mom first, but I’m not the only one who would like to see her run for office someday — and in an environment where she doesn’t have to hide her professional and intellectual light under a demure bushel.