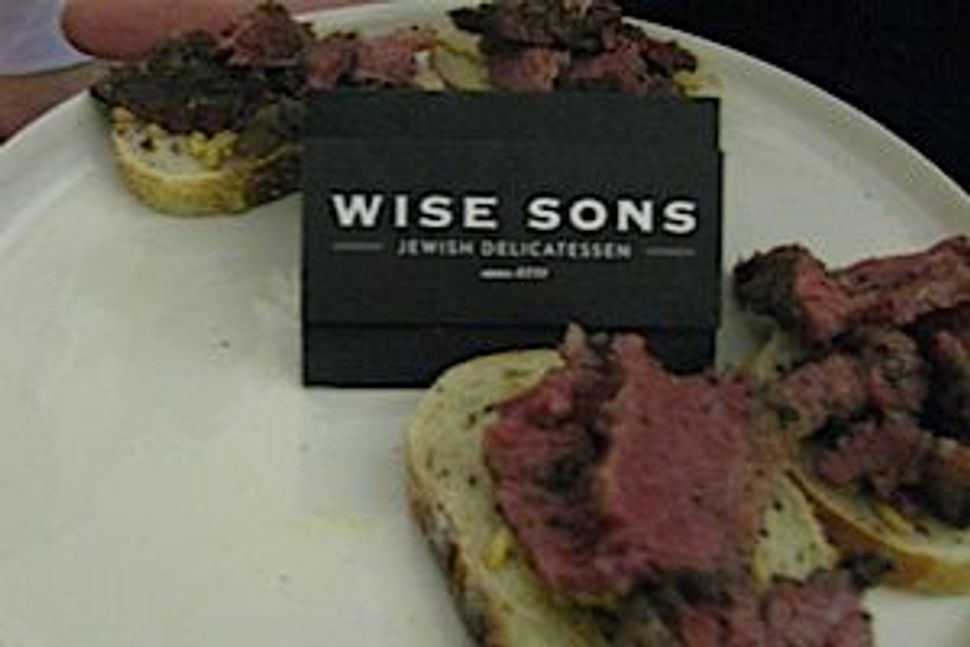 Last week I bought an impromptu ticket for New York, not because there was a great deal or I found Broadway tickets for next-to-nothing, but because I came across a blurb about a conference on the Future of Jewish Food. A conversation focused solely on what is Jewish food and where it is headed — not to mention an all-star line-up of Jewish deli proprietors, authors, and critics — I knew I had to attend. As a graduate student studying Jewish American culinary history (yes, academia can be this great), this conference seemed to be a great opportunity to introduce myself to contemporary thoughts on Jewish cooking in America.

Joan Nathan, the doyenne of Jewish (American) cooking, started off the first panel by noting, in the words of Barbara Kirshenblatt-Gimblett, that “Jewish food is anything eaten by Jews.”

By this logic, wherever I am and whatever I eat could be considered Jewish food. But this just doesn’t seem right to me. Shouldn’t Jewish food be shmaltzy and unpronounceable? And what about kosher!?

The Jewish people have distinguished themselves for thousands of years through the laws of kashrut, the dietary prescriptions that say what we can, cannot, and when we’re allowed to eat it. While there may be some nutritious merit to these laws (e.g. consumption of dairy or other calcium-laden foods can decrease the absorption of iron in a meal) some of them just seem arbitrary (using a very bright light to screen out microscopic bugs in vegetables). An oft-used justification for these laws and so many others is that they distinguish us from other people.

Fittingly, wherever Jews have lived, they have set themselves apart from local cuisine through these laws. Even our names for some specific foods and some of our stranger cooking habits come from commandments found in scripture. One can look at challah and call it twisted egg-bread, which it is, but for us it is so much more. There is a commandment, known as Hafrashat Challah (Bemidbar 25:14), to take a small amount of challah dough and burn it in the oven until it is completely scorched.

Is there any other community today that still sacrifices precious dough like this? Odds are it’s doubtful. And this is just one example of many that set our food ways apart from others.

Even when our people were stretching every penny, kopek, and groschen to put food on the table, they were still separating their dough and connecting to Jewish history and peoplehood. These practices, which may seem outdated and unnecessary, are what bind us together as a people. Regardless of where we live, what political ideology we belong to, or where we get our morning coffee, our Jewish foods remind us of who we are and where we came from.

While many, like the four delis featured at this conference, no longer put a premium on meals being certified kosher, they are still serving Jewish food. And while that moniker may not cover any food that is eaten by Jews, it is the food we have distinguished from mainstream culinary traditions.

Going into this event I was very worried with the delis represented because none of them were kosher. However, after listening to their panel, I was reassured that the kishkes of Jewish food are central to their lifestyle (…though it is uncertain how they feel about this traditional Jewish stuffed intestine). It seems that while the future of Jewish food, especially in the lens of mainstream culture, may not be kosher, it is at least kosher style.

Some of them may serve milk and meat in their delis, but they do so not because they reject Judaism, but because Jewish food in America is deli meat and bagels. They still adhere to the core belief that Jewish food should be prepared conscientiously and in accordance with grandma’s kitchen values.

While I was unable to eat any of the smoked meat and pastrami being offered at the conference, I was able to kibbitz with the panelists and attendees, gauging their reactions to the discussion and nosh. Given how animated and excited everyone was, I feel like I can safely say that Jewish food has a strong future. Jewish food may become more common in American society, but Jewish food will still differentiated by its roots in Jewish tradition and history.

And if bubbe and zaiyde would be proud of the new delis, as Gail Simmons’ mentioned her father-in-law was, then the future of Jewish food seems safe… and delicious.