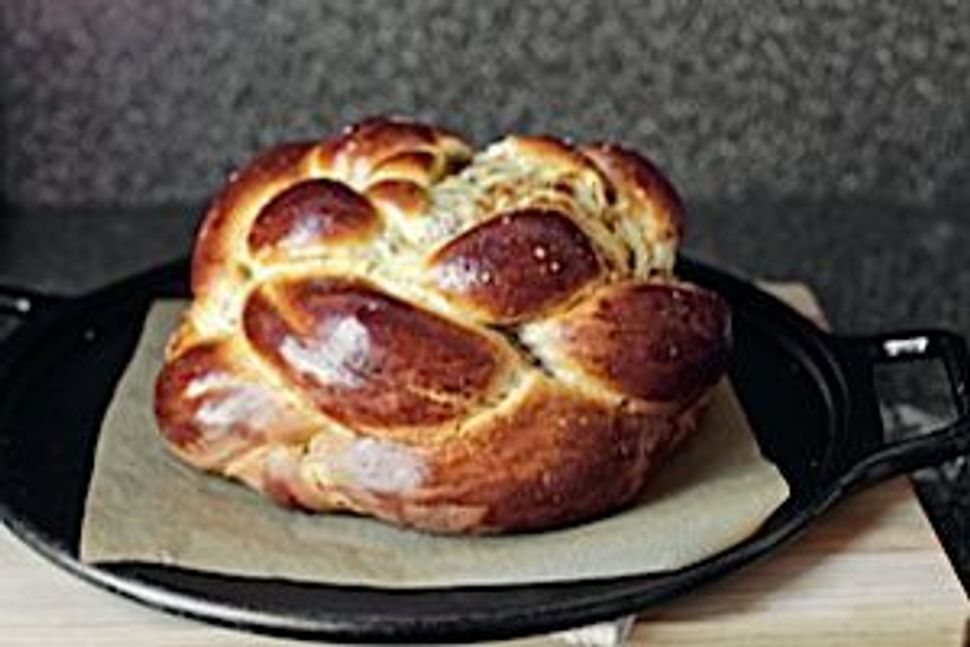 There are two general camps of cookbooks: the kind that you keep on the coffee table and the kind that you keep in the kitchen. The former are big, sumptuous, glossy numbers, usually full of exotic ingredients and complicated recipes. The latter are often less pretty but functional, stained by sauce splatters and muffin batter. It’s rare to find a volume that serves both purposes, but Deb Perelman’s wonderful [The Smitten Kitchen Cookbook]( http://smittenkitchen.com/book/](http://smittenkitchen.com/book/ ‘The Smitten Kitchen Cookbook’) is one of them.

Perelman, who based the book on her popular website of the same name, describes herself as “an obsessive home cook,” and her recipes certainly reflect that. She tinkers, she recreates, she attempts to cajole people. Her buttered popcorn cookies, for instance — salty-sweet umami crunch-balls that should replace Rice Krispie treats in your next holiday platter — were an effort to convince a friend to see the merits of buttered popcorn. She updates old recipes, because, she admits, “my curiosity gets the better of me, and it’s usually worth the blasphemy. Her fig, olive oil, and sea salt challah for example, takes a classic and adds notes of herbaceous savoriness to the sweet and supple bread. She uses honey instead of sugar to leaven the yeast, and tucks a fig and orange zest paste into the braided dough. The result is something heavenly, and fairly simple, even if you’re not a seasoned baker. (Though, I confess, I abandoned her braiding technique in favor of a simpler one.) A dear friend of mine, asking after what I was baking, was the first to proclaim “heresy!” about the addition of salt and figs. He was also the first to ask for the recipe once he tasted it.

That’s usually how Perelman’s recipes end up. From the dainty, ridiculously easy kale salad with cherries and pecans to the unctuous fattiness of the sweet-and-sour brisket recipe that includes her version of “Jewish barbecue” sauce. She has recipes for chocolate raspberry rugelach, inspired by her husband Alex, and rhubarb hamantaschen, the perfect light spring note for Purim. Though Perelman is Jewish, her Jewish-based recipes are a small percentage of the book. Still, it wouldn’t take much to adapt the majority of her meals to a kosher Shabbat dinner spread. For diehard fans of the blog, this book is a must-have — only about 15% of the recipes have appeared on her site before.

And not only are the dishes good, Perelman is a deft, funny, and vivid mentor. Even the most intimidating meals seem possible with little more than pantry staples and a trip to the corner grocery store. Unlike other cookbook authors Perelman won’t send you on a city-wide Whole Foods search or a visit to a specialized Middle Eastern deli. She even has an aside on why she doesn’t do that, because those recipes are “clearly begging never to be used in anyone’s home.” Perelman has the matter-of-factness of Mark Bittman, but the zing and eye for decadence of David Chang. Not to mention, the whole package looks as sumptuous as the dishes contained therein: Perelman’s photography of mouthwatering golden chocolate chip brioche pretzels and towers of tomato scallion shortcakes with whipped goat cheese are basically an appetizer in themselves. All the while, she writes like a good friend who just happens to be a whiz in the kitchen. Smitten is exactly what you’ll be by this book.

The terrain of updating old, beloved recipes is fraught with land mines. People don’t travel by planes, trains, and automobiles, and sit in three- hour traffic jams on Thanksgiving afternoon because they’re secretly hoping their mother decided to make not their family’s favorite stuffing this year, but a new one she clipped from a gourmet food magazine. And my people haven’t been sitting down to Friday night and High Holiday dinners with a braided loaf of egg bread for thousands of years with the nagging suspicion in the back of their minds that it really could use an update — perhaps with some imported sea salt?

Because of this, I always try to tread carefully when making old- school dishes, yet usually fail because my curiosity gets the better of me. This time, I wasn’t sorry at all. I took my favorite recipe for challah and replaced the vegetable oil with olive oil, the sugar with honey, the raisins I might use in a sweeter loaf with a fig paste cooked with orange zest, and then I finished it with sea salt and proceeded to watch a table full of carb-eschewing people fall upon it like a pride of hungry lions. This challah gets requested by name.

Leftovers, should they survive the dinner table, make some fine French toast, especially when drizzled with warm honey and served with a dollop of fresh ricotta.

To make dough with a stand mixer Whisk the yeast and 1 teaspoon honey into a cup warm water, and let it stand for a few minutes, until foamy. In a large mixer bowl, combine the yeast mixture with remaining honey, 1/3 cup olive oil, and eggs. Add the salt and flour, and mix until dough begins to hold together. Switch to a dough hook, and run at low speed for 5 to 8 minutes. Transfer the dough to an olive- oil- coated bowl (or rest the dough briefly on the counter and oil your mixer bowl to use for rising, so that you use fewer dishes), cover with plastic wrap, and set aside for 1 hour, or until almost doubled in size.

To make dough by hand Proof the yeast as directed above. Mix the wet ingredients with a whisk, then add the salt and flour. Mix everything together with a wooden spoon until the dough starts to come together. Turn the mixture out onto a floured counter, and knead for 5 to 10 minutes, until a smooth and elastic dough is formed. Let rise as directed above.

Meanwhile, make fig paste In a small saucepan, combine the figs, zest, water, juice, salt, and a few grinds of black pepper. Bring to a simmer over medium heat, and cook, stirring occasionally, until the figs are soft and tender, about 10 minutes. Season with salt and pepper to taste. Remove from heat, and let cool to lukewarm. Process fig mixture in a food processor until it resembles a fine paste, scraping down the sides of the bowl as necessary. Set aside to cool.

Insert figs After your dough has risen, turn it out onto a floured counter and divide it in half. Roll the first half of the dough into a wide and totally imperfect rectangle (really, the shape doesn’t matter). Spread half the fig filling evenly over the dough, stopping short of the edge. Roll the dough into a long, tight log, trapping the filling within. Then, gently stretch the log as wide as feels comfortable (I take mine to my max counter width, about three feet) and divide it in half. Repeat with remaining dough and fig filling, creating four ropes.

Weave your challah Arrange two ropes in each direction, perpendicular to each other, like a tight tic-tac-toe board. Weave them so that one side is over, and the other is under, where they meet. So now you’ve got an eight- legged woven- headed octopus. Take the four legs that come from underneath the center, and move them over the leg to their right—i.e., jumping it. Take the legs that were on the right and, again, jump each over the leg before, this time to the left. If you have extra length in your ropes, you can repeat these left- right jumps until you run out of rope. Tuck the corners or odd bumps under the dough with the sides of your hands to form a round.

Transfer the dough to a parchment-covered heavy baking sheet or, if you’ll be using a bread stone, a baker’s peel. Beat egg until smooth, and brush over challah. Let challah rise for another hour, but 45 minutes into this rise, preheat your oven to 375 degrees. bake your loaf Before baking, brush loaf one more time with egg wash and sprinkle with coarse salt if you’re using it. Bake in middle of oven for 35 to 40 minutes. It should be beautifully bronzed; if yours starts getting too dark too quickly, cover it with foil for the remainder of the baking time. The very best way to check for doneness is with an instant- read thermometer— the center of the loaf should be 195 degrees.

Cool loaf on a rack before serving. Or, well, good luck with that.

Excerpted from THE SMITTEN KITCHEN COOKBOOK by Deb Perelman. Copyright © 2012 by Deb Perelman. Excerpted by permission of Knopf, a division of Random House, Inc. All rights reserved. No part of this excerpt may be reproduced or reprinted without permission in writing from the publisher.