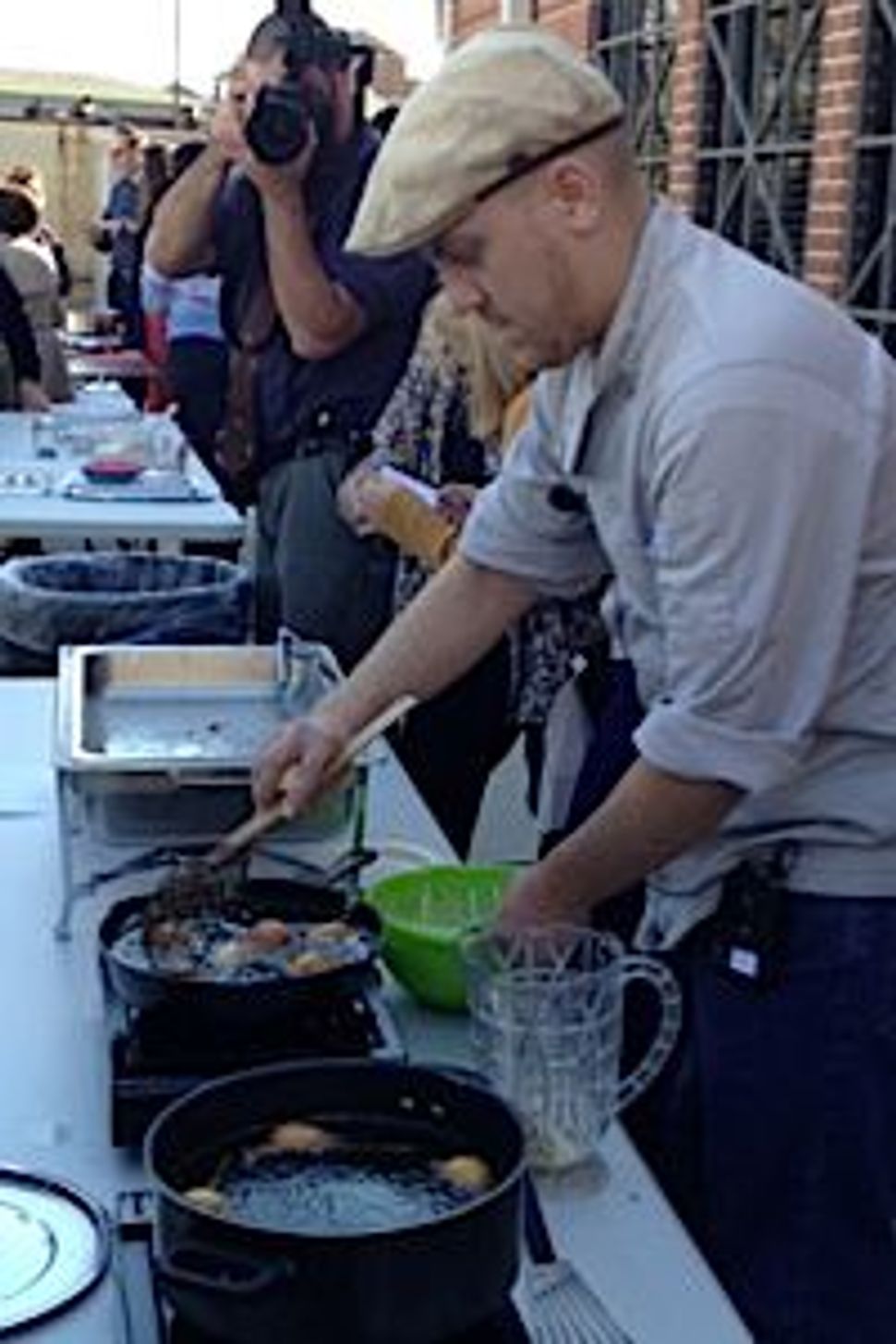 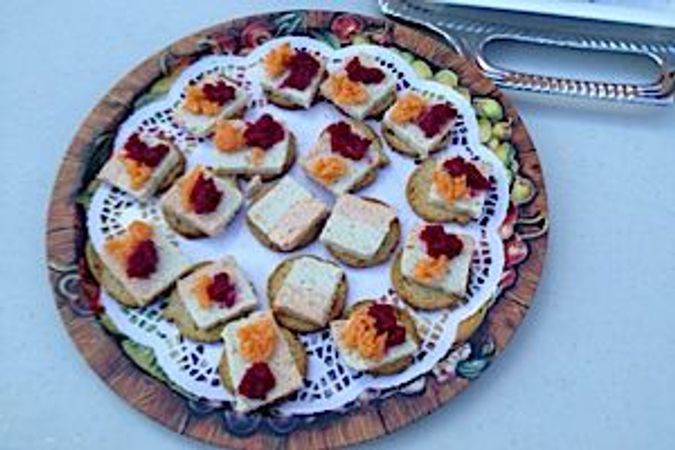 A mom, a food crafter and a chef glare at one another in a Baltimore parking lot ready to throw down with fire and sharp objects. No, this is not a surprise culinary season of The Wire, or a bizarre new John Waters film. It’s a “Gefilte Fish Throwdown” sponsored by the Jewish Museum of Maryland as part of their exhibit “Chosen Food: Cuisine, Culture, and American Jewish Identity.”

Aromas of fresh fish, piquant onion and horseradish, with faint notes of celery and short gusts of white pepper seem “louder” than the dogs yelping in the distance or the occasional siren. As the brisk cool air dances with the flames of the camping stoves, and the hot, bright sun beats down on the 100 or so people in the audience, it may be a Sunday in October, but it’s beginning to smell a lot like Passover.

Hosted by honored guest, Aaron Harkin of Baltimore’s NPR station, WYPR, and host of The Signal, the competition got under way as the eager audience was introduced to the three participants. Dave Whaley of Baltimore’s acclaimed restaurant, Wit and Wisdom at The Four Seasons, unveiled his novel gefilte fish corndog, dipped in corn batter and deep fried served with a birthday-cake-pink tinted sauce of cream, horseradish and beet powder. “I didn’t have whitefish or pike, so I decided to use cobia, another kosher fish, that I knew would stand up to being made into a fish sausage and would remain firm and flavorful throughout the process.”

Liz Alpern of New York’s Gefilteria demonstrated their unique but more traditional approach using layers of whitefish, pike and a “ribbon of salmon” to make more of a gefilte fish pate, baked in loaf pans. Alpern, who is dedicated to the preservation of Jewish foodways, describes their renowned creation as “one of the few kosher certified gluten free versions available.”

The Jewish Museum’s own Susan Pratz of Baltimore’s Greenspring neighborhood brought her own creation, a sweet mirepoix/tomato sauce in which she placed balls of her favorite store brand and simmered until plump. 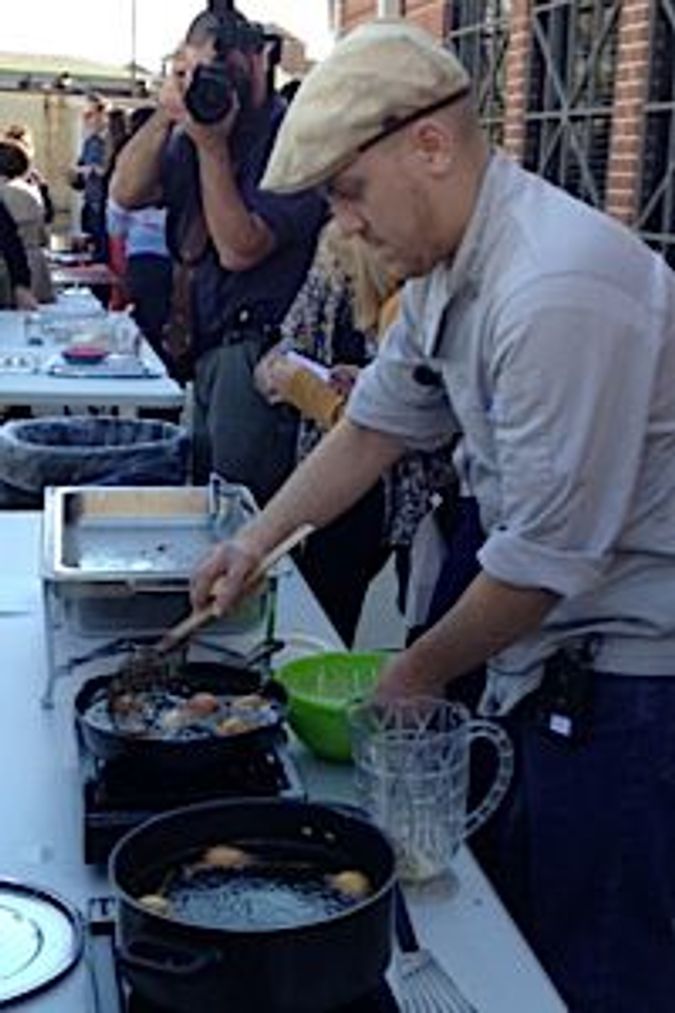 “Gefilte,” or “gefulte” is a Yiddish word with German origins, meaning “stuffed.” Originally gefilte fish was ground carp, pike, or whitefish mixed with breadcrumbs, onions and seasonings that was stuffed back into the skin of the fish and then cooked. Over time the fish was simply made into balls or patties and poached in water or broth. The dish is to Ashkenazi Jewish food what chitlins or hog intestines are to African American food or lutefisk, a lye soaked codfish jelly, is to the cuisine of Scandinavia and the Great Lakes — a true soul food with strong devotees and equally strong detractors.

Indeed Harkin described it as “merely a vessel for the consumption of horseradish.” There are even regional fights over gefilte fish that originated in medieval Europe that last to this day — some Jews like their gefilte fish sweet while others like it unsweetened and peppery. One audience member said, “show me your grandmother’s recipe and I’ll tell you where she was from!”

At the end of the day, after a little more than an hour and a half of cooking and plating, and tasting, the voting commenced. Tickets fell into jars and the dies were cast. Dave Whaley took first place with his gefilte fish corndogs and horseradish cream sauce, Liz Alpern was a very close second followed by Susan Pratz in third place. In the words of Liz Alpern, “I really didn’t come to compete, I came to participate and have fun!”