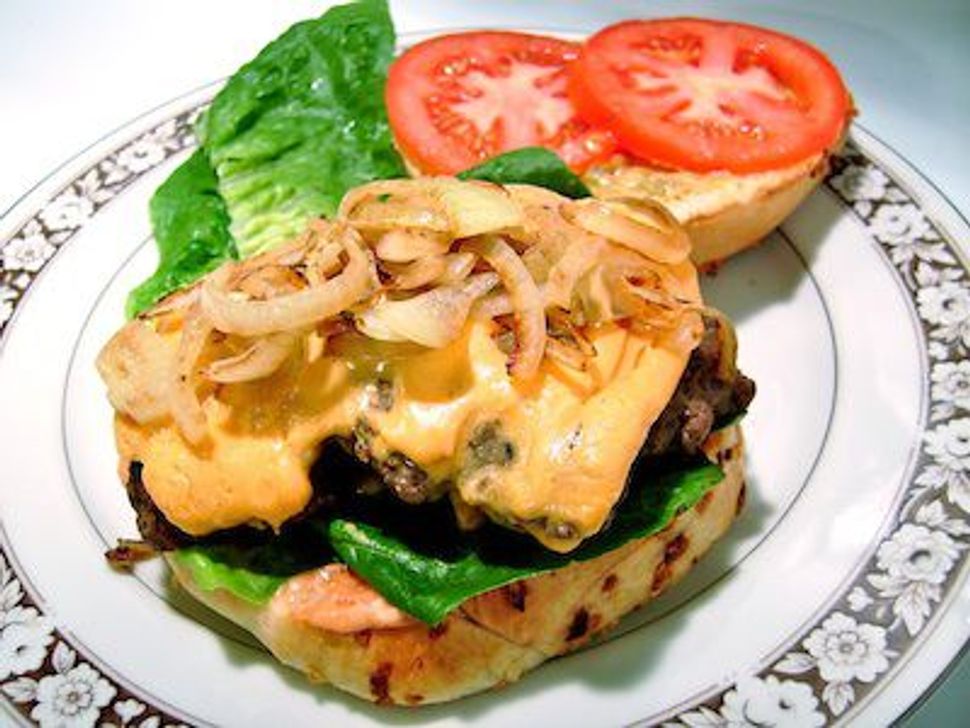 Let me be clear: I don’t feel that I am missing out on the secret world that is bacon, nor do I have a desire to eat octopus or crocodile. But the concept of mixing milchigs with fleishigs (that is, dairy with meat) is incredibly enticing. Cheese is good; meat is good; why not mix them? I mean, other than the thousands of years of tradition, which I do my best to follow. I often joke that if I were to ever really break kashrut, it would be on turkey and Swiss, which is not even biblically treyf.

This desire to break Jewish law is not a new concept for Jews. It is well know that the Talmud gives suggestions to those who wish to break kashrut. The Rabbis recommended that one eat udder, a meat which naturally is marinated in its own milk, properly kashered of course, and you will experience the great flavor of the nations: meat cooked with dairy.

It is also not unique to want to eat the “non-Jewish” foods that are popular in the countries of our exile. I would argue, in fact, that what we consider Ashkenazik Jewish food is really just adaptations of goyish food (meaning food of the nations). Take schnitzel as a prime example. Schnitzel is not Israeli fried chicken, as the kinderlach are raised to believe, it is an adaptation from German pan-fried pork. The “Jewish food” of my childhood was the “Polish” food of my great-grandparents’.

So in America, we have learned to be American. Our parents’ generation read comic books, their parents played baseball, and all of them ate hotdogs. Now there is an adaptation of food, if I have ever seen one. The quintessential American hotdog, not a century ago, was made of leftover parts of whatever animal was butchered that day; Jews wanted hotdogs; the all beef hotdog was created. So why can’t we just throw a kosher cheeseburger on the grill next to that frank?

As I hinted at before, I spend a portion of my television viewing on food shows. Recently I was watching a show discussing recipes for a cheese stuffed burger called the “Juicy Lucy.” This idea of hot cheese oozing out of a perfectly cooked mound of ground beef just sounded too good to pass up. So I thought for a while, and scanned the internet, for ways to recreate this in a kosher fashion. I cooked up a version of the Juicy Lucy using a homemade black bean burger to surround my kosher fontina cheese. Let me tell you, this was delicious, but it was exactly what it sounded like: a black bean patty with cheese.

This was not the first time I had added cheese to a meat replacement and been a bit disappointed. I have also tried throughout my life to use soy (read fake) cheeses on real meat, but they never did it for me. They either felt like plastic, or they tasted like it. So when I came across the new block version of Daiya cheddar cheese, I was not impressed that it advertised, “it melts and slices!” What would melting and slicing do if it would just taste like nothing? But I thought I would give it a try, and now, I can say with full confidence, that it melts. Boy, does it melt! But, more than that, it really adds a great flavor to a burger; a real, beef burger. I am willing to say that in an uncontrolled, non-scientific, unproven study, I have determined Daiya Cheese to be the best kosher-parve cheese alternative to melt on a burger.

The flavor that it adds is not that of a good, sharp, cheddar, but more of a gooey nacho cheese, a sort of liquid gold. With a nice slice of tomato, grilled onions, and some lettuce, it is the all-American cheeseburger that the Jewish people have been looking for since that last string of Wendy’s commercials came on TV. I also took it on an onion roll with some deli mustard, pickle relish, and ketchup just to put it over the top. Next time, it may also get some fried pastrami in there, but for now, this craving has been sated.

David Chudnow is an up-and-coming film/video professional and self proclaimed foodie who always figuratively and literally eats his mistakes. He currently resides in Columbus Ohio with his lovely fiancee, Heather, and two cats, Lando and Wedge. David is looking to relocate, so if you know of any job opportunities, please contact him](mailto: [email protected]).