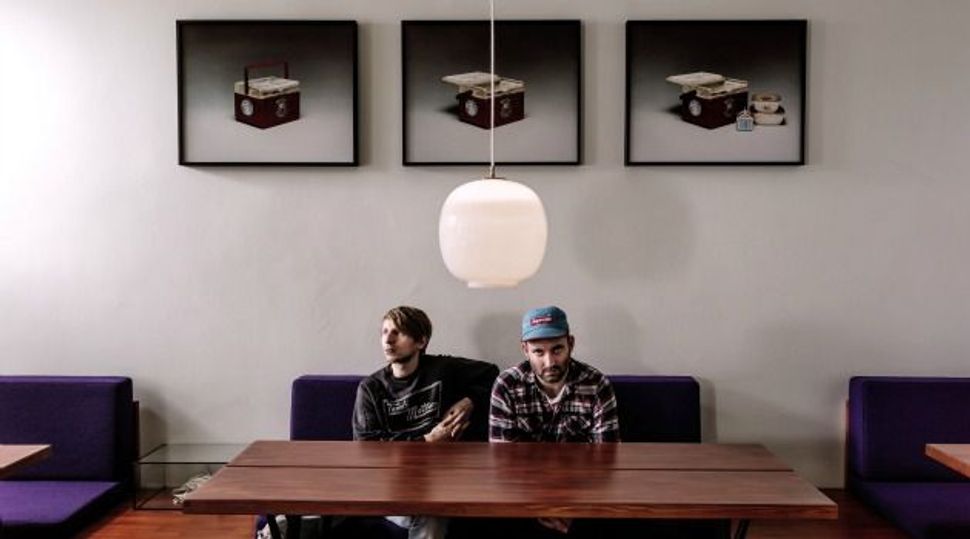 This past May, a Jewish delicatessen opened in Mitte, Berlin’s central (and rather trendy) district. Founded by two disc jockeys in their 30s, Oskar Melzer (who is Jewish) and Paul Mogg (who is not), and serving up house-cured pastrami, chicken liver brulée, challah and matzo ball soup in a sleekly designed space, Mogg & Melzer Delicatessen is the most recent example of the nouveau deli movement. And, even more so than at its North American contemporaries — like Mile End in New York City and Caplansky’s in Toronto — sampling the half-sours and creamy coleslaw at Mogg & Melzer feels distinctly historic.

Before World War II, Mitte was home to many of the city’s 160,000 Jews. It had several synagogues, community centers and day schools. Mogg & Melzer itself is located in a building that housed a Jewish girls’ school until 1942, when it was shuttered under Hitler’s regime. The building was returned to Berlin’s Jewish community in 2009 and has since been transformed into a multistory space dedicated to art and food both Jewish and otherwise. Thanks to Melzer, who grew up in Munich but discovered pastrami while visiting New York on his bar mitzvah trip, the homey scents of brine and spice now fill the hallways. “My favorite customers are people who come to see where their grandmothers went to school,” he said.

Mogg & Melzer is part of a larger resurgence of Jewish culture and cuisine that has emerged in Berlin in the past half-decade. In the same building, caterer and hotelier Michael Zehden serves elegant, kosher Sabbath dinners in a converted classroom. And the fragrant rye bread sandwiching Mogg & Melzer’s Reuben is baked at Barcomi’s — a bakery founded by Seattle native Cynthia Barcomi, who moved to Berlin in 1985 after graduating from New York City’s Columbia University. First opened in the mid-1990s, Barcomi’s is also credited with helping to introduce New York-style bagels and cheesecake to Berlin via two airy cafe locations. Slathered with cream cheese and draped with delicate smoked salmon, the chewy sesame bagels are particularly convincing. A few blocks away from the Jewish girls’ school, Ehud “Udi” Cohen, an Israeli who once lived next to Katz’s Deli in New York City, runs Ruben Carla, a meat-centric restaurant that opened early in 2012 and serves pastrami sandwiches during the day and tagliata, Italian-style roast beef, at night. “Many of my customers are artists and world travelers who have experienced the New York pastrami fetish,” Cohen said. His second eatery, Luigi Zuckermann, which opened in 2009, similarly combines Italian cold cuts (“I spent a lot of time in Italy, and fell in love with the food,” he explained) with Jewish deli meats like roast beef and pastrami.

These new Jewish eateries are not the first to emerge in the city post-Wall; they join a handful of established places like Beth Café, a cozy kosher restaurant that is outfitted with mismatched furniture and antique teapots and serves Jewish standards like gefilte fish and deliciously dense noodle kugel. Founded by a local synagogue in 1991, the café also stocks a variety of kosher-certified products like wine, marble cake and soup mix — imported pantry items that remain difficult to find in Berlin. And yet this emerging crop of restaurants has begun to breathe new life into Berlin’s Jewish cuisine, offering creative and updated interpretations on tradition. “We do not want to copy what came before,” Melzer said. “We would rather reinvent it.” To that point, the pastrami they serve reflects German food traditions, but is actually an updated import of American (and particularly New York) Jewish cuisine.

This urge to innovate is fueled, in part, by the significant influx of new Jewish residents who have moved to Berlin over the past decade. By the end of the Cold War, only 4,000 Jews lived there, primarily to the west of the Berlin Wall. After the Wall came down, a wave of Russian Jews arrived. Their presence swelled the overall Jewish population and fostered the creation of new institutions. Kaedtler, a traditional German bakery, opened in 1935 by a Christian family, responded to the growing Jewish community by getting kosher certification in 2002. Today its breads (including the challah it now makes on Fridays), as well its flaky apple strudel, cherry-studded cake and several other pastries, are baked under rabbinic supervision.

Most recently, thousands of Israelis have moved to Berlin, including painters, filmmakers and musicians attracted to the city’s thriving arts community, and young people whose grandparents were deprived of citizenship by the Nazis can now apply for a retroactive German passport. According to a recent article in the Jewish Museum of Berlin’s publication, JMB Journal, an estimated “20,000 [Israelis] now live on a permanent basis in Berlin” — more than the Soviet Jews who came in the 1990s.

Like Cohen, many of these new arrivals have opened restaurants, celebrating what the journal called “Israelis’ love affair with eating.” The range includes Middle Eastern-eateries like Sababa and Zula, which serve hummus and shakshuka, eggs poached in tomato sauce. (They join several hummus and falafel restaurants owned by Berlin’s established Turkish community.) On the other end of the spectrum, there is MANI, an upscale hotel restaurant that focuses on French cuisine containing Israeli and Middle Eastern ingredients, thanks to hotel owner Ariel Schiff’s Israeli background.

Berlin’s residents, both Jewish and not, seem to be excited by the cultural and culinary developments in their midst. While visiting Mogg & Melzer this past October, I observed a table of stylishly dressed Germans chatting with excitement about getting to try “real New York cheesecake” while I snapped photos of their plates. And MANI’s head chef and general manager, both non-Jewish Germans, recently returned from a culinary scouting trip to Israel. “It was incredibly inspiring, and we came back with many new ideas,” manager Ralf Swinley said.

Melzer has a slightly more sober take on the situation. “The reason it feels like so much is happening here is because we were starting from almost nothing,” he said. His point is well taken: Berlin’s Jewish community is still a fraction of what it was before World War II, and decades later, the wounds of the past are still freshly felt. But tucking into a slice of creamy mohnkuchen, poppy seed cake, at Kaedtler or spooning up the kugel at Beth Café, one tastes a bit of healing with every bite.

Leah Koenig writes a monthly column on food and culinary trends. Contact her at [email protected]

Where to Eat in Berlin (*denotes kosher certification)

**Kaedtler Bakery*** A traditional German bakery founded in 1935, that had many of its breads and pastries certified kosher in 2002.

MANI This sleek, upscale restaurant, located in the MANI Hotel, serves French-style cuisine with a focus on Israeli and Middle Eastern ingredients.

Ruben & Carla Also owned by Udi Cohen, this shop is a pastrami bar during the day and serves tagliata (Italian-style roast beef) at night.

Zula This Israeli-owned café serves many varieties of hummus, as well as soups and different salads.