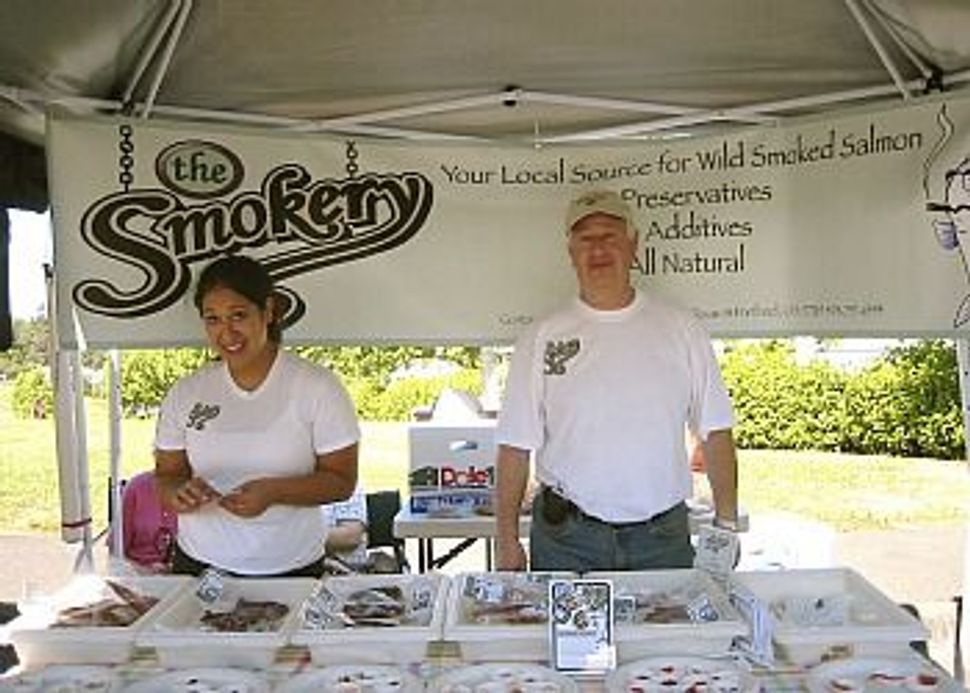 Michael Jacobs and his daughter Danielle. Image by Rhona Jacobs

The mutual assistance comes naturally. Michael and Rhona Jacobs run The Smokery, and their daughter Lisa, the third of their four kids, runs burgeoning Jacobs Creamery. Started as hobbies, both businesses have exploded into what may be the world’s only Irish-Jewish artisan-food dynasty.

Dublin-born, Michael Jacobs moved his family to Portland in 1993 after nine years in southern California. Despite his adopted city’s zealously homegrown food culture, stateside spins on his favorite foods couldn’t come close to what he ate in Ireland. “We’ve always eaten smoked salmon, but never liked anything we found in the U.S.,” he told the Forward in a mellow lilt. “We’d been used to lox, but here it’s too salted, too processed, too… Yuck.”

On a trip up the Oregon coast with his family in 1999, over a route dotted with smokehouses, Jacobs spied a sign touting smoked salmon. He asked the proprietress, who turned out to be a German-Jewish immigrant named Karla Steinhauser, for samples. Recognizing his accent, she brought out a plate of smoked jowls, a delicacy known on the east coast as collars, or the fatty part of salmon near the gills. “It was delicious. And Karla’s Smokehouse got me started on my salmon fetish.”

After hearing Jacobs grouse that he’d never find smoked fish as good as Steinhauser’s, his daughters bought him a home smoker. “They said, ‘Here, Dad. Smoke your own and stop complaining,’” he laughed. “So the first thing I did was break out the booklet and follow the recipes and instructions. The end result was just as disgusting as what they sell in stores.”

Jacobs started fine-tuning his preparation — cutting back on brine, using a thermometer to monitor heat, maintaining temperatures for a shorter time. “I’d bring salmon into work,” he said. “My coworkers would give me feedback. And after a year of trial and error, I got it so that not only did I like it, but others did too.”

Eventually word got out, and friends started buying. “But I don’t like making money off friends and family, so I decided to start selling at the farmers market.” He called his neophyte business The Smokery. That was 2005; today, the Jacobs’ smoke and sell nearly 225 pounds of fish each week from a dedicated smokehouse in their converted garage. The business also earned kosher certification in 2010.

When the Jacobs’ get fish home from their supplier — a co-op that fishes only at sea using hooks and lines rather than nets — they bone it by hand, removing hundreds of tiny pin-bones, one at a time, with stainless steel long-nose pliers.

After fish gets cut and apportioned into containers, the brining magic starts. The couple fills each container with a different flavor of brine. While the Smokery used just one variety back in 2005 — the Old Irish, a mix of salt, brown sugar, thick molasses, onion, garlic, and dillweed — it now produces ten varieties. Jacobs’ own favorite is the Maplewine, made with organic dark-amber maple syrup and Manischevitz sweet blackberry wine. Bowing to market tastes, a sugar-free brine just made its debut.

The fish is cured for 24 hours, then rinsed with cold water, dried with paper towels and air-dried. Air-drying, Jacobs explained, allows formation of the pellicle, a layer that locks in proteins and flavor. “If you hot-smoke, the proteins ooze out,” he said. “It’s not as flavorful.” On the third night, the fish gets smoked over a “very intense” mixture of hickory and mesquite. “We use large volumes of smoke, but for very short periods,” Jacobs said. “It doesn’t dry out the salmon, but infuses it with flavor.” Smoking usually takes about four hours, Jacobs said. At the market, whatever’s on offer typically sells out, Jacobs said.

The Jacobs smoke it up in the evening, after business hours; Michael, 57, continues to work in technology sales during the day, and Rhona, 54 — “a Dublin Jewish girl” — is the resource coordinator at the Portland Jewish Academy, a local day school. She’s also The Smokery’s harshest critic. “She’s the first taster for fish,” Jacobs said. “If we’re trying out a new batch or a new brine, sometimes she’ll just spit it out. ‘Not worth swallowing,’ she’ll say.”

The Jacobs’ don’t foresee massive growth for the Smokery — no franchises or brand extensions — but don’t necessarily want it. “This business is kind of like our retirement package. It’s something we can do in our twilight years. And it’s something we enjoy.”