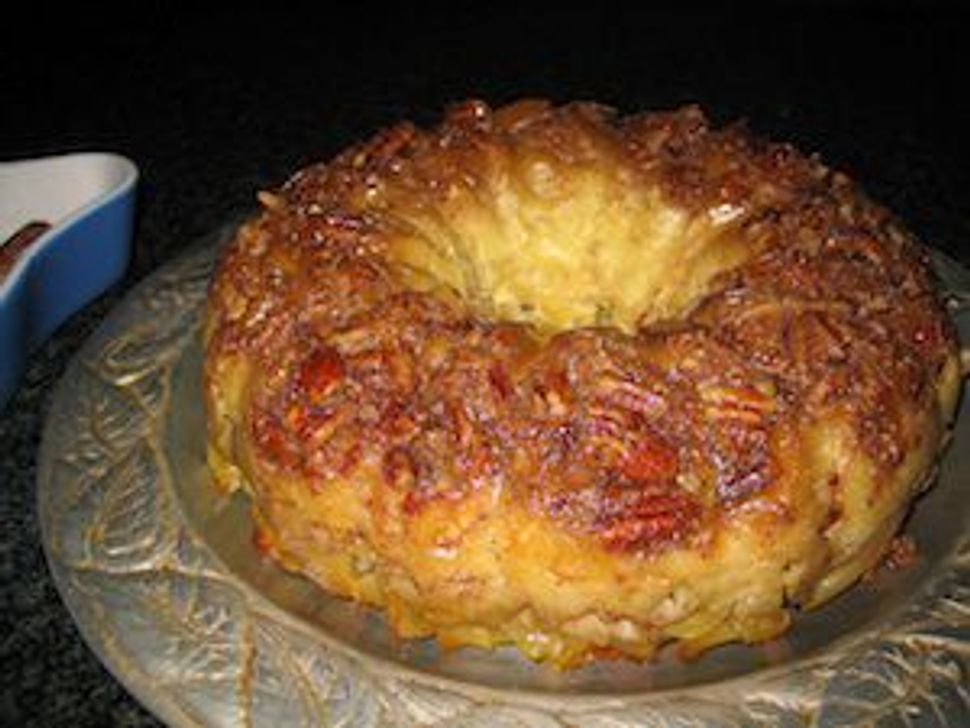 This is the opening line to a comment by Jezzie in Scottsdale, AZ in a recent New York Times article, named “Kugel Challenge.” What started out as simple question to replicate a quinoa kugel featured at a dinner has turned into one of the greatest comment battles about Jewish food in a while (read: since the annual High Holiday brisket and matzo ball soup discussions).

Martha Rose Shulman, of the “Recipes for Health” column of the Times offered five recipes for healthy, alternative grain kugels for this wary reader. Naturally, “healthy” and “alternative grains” have struck some serious cords within the Jewish (or otherwise) kugel-consuming communities out there.

Carol M. from LA writes, “kugel should be absolutely deadly.” And Jen in Astoria decrees, “any kind of ‘nutritionally correct’ Kugel is an Abomination unto the Tribe.”

Then there is LK from NYC who notes, “A traditional kugel would not include dairy products” because it is “typically a Sabbath dish.”

After reading just a few of these, I can imagine that you may be feeling a little frustrated. And if this is not the case, go to a few more Kiddush luncheons, mention the kugel, and then get back to me.

Kugel is one of the iconic foods of the Ashkenazi canon. It was first seen in Jewish kitchens in Germany around the 12th century, where it was a doughy complement to the Sabbath cholent. Over time, this dough became its own sort of pudding. Whether it was steamed and poached (in the cholent pot) or baked on its own, this Sabbath meal accompaniment became a fixture of the Jewish week. Depending on what was available, the kugel may have been as simple as potatoes, onions, and eggs, or something much more grand, like the dairy noodle kugels so despised by our arteries. (For more on the history of this dish, read Gil Marks’ “kugel” entry in the Encyclopedia of Jewish Foods.)

But over time, like so many Jewish foods, especially after encountering the American melting pot, the kugel has been transformed. What was originally an egg-bound dish can now be vegan. What once exclusively used matza meal or flour to bind with potatoes, can now be gluten-free. And where dairy kugels reigned supreme, soy derivatives, non-dairy creamers, and hard-to-pronounce enzymes can allow all kugels to be included with any meal.

And while this will never solve the argument on what is or what can be a kugel, I hope that you can understand this as a versatile dish. While there may have been more concrete beginnings, there are a lot of opportunities for kugel in the future. It may not be your bubbe’s kugel, but that should not dictate whether this is or is not a kugel.

And like so many dishes that came out of your bubbe’s kitchen, kugel was not a “healthy” dish. But neither was most anything else commonly found in the shtetl. Like so many communities that live in poverty, the Jews were happy to just put calories in their bodies, and if they could embellish their daily potatoes or gruel with a couple eggs, then Shabbat was going to be beautified.

Even though it may not have been made with quinoa and other “superfoods,” kugel, like chicken soup is good for the soul. Even when served cold, kugel will bring about a feeling of warmth. (It may be impossible to make a kugel without love and intention.) So regardless of how many eggs or how much fat you use, kugel, in moderation, always nourishes the soul.

But if you are truly afraid of making one of the dairy death bombs that Carol M. so strongly identifies with, follow some of the comments and make some substitutions. Applesauce can be a great egg replacement, yogurt can be used for butter, and vegetables and spices can always step up the flavor ante while you take out fats and sugars. Be creative. As long as you hold true to the essence of kugel—making something special out of the ordinary weekly foods and binding it together to be baked, poached, or steamed—you are on the right track.

I like to think of kugel as a canvas for Jewish expressionism…and the state of my larder. I am an equal opportunity kuggeller and am currently very excited about vegan approaches to kugel—especially with applesauce and squash puree as my egg substitutes—and would love to hear any questions or suggestions you have.

Unrelated, as the host and organizer of the Malka and Elimelech Kugelov Kugel-off for the past four years, I have experienced my fair share of kugel competition. During this time, I have tasted, judged, and critiqued scores of different kugels. Of these, only a half dozen would qualify as kugels by Jen in Astoria’s or Carol M. About a dozen were potato kugels, a score were noodle kugels, and the rest—except for the banana bread that someone tried to sneak in—were not stereotypical kugels. There is a whole world of kugelling opportunities out there, so please, do not hold back. If you think it can work, try it. If you are dubious, I’ll be happy to help out with any kugel queries you may have. Please feel welcome to email me at [email protected].

*Author’s note: If it cannot be made in a bundt pan, my family would be hesitant to recognize it as a kugel.