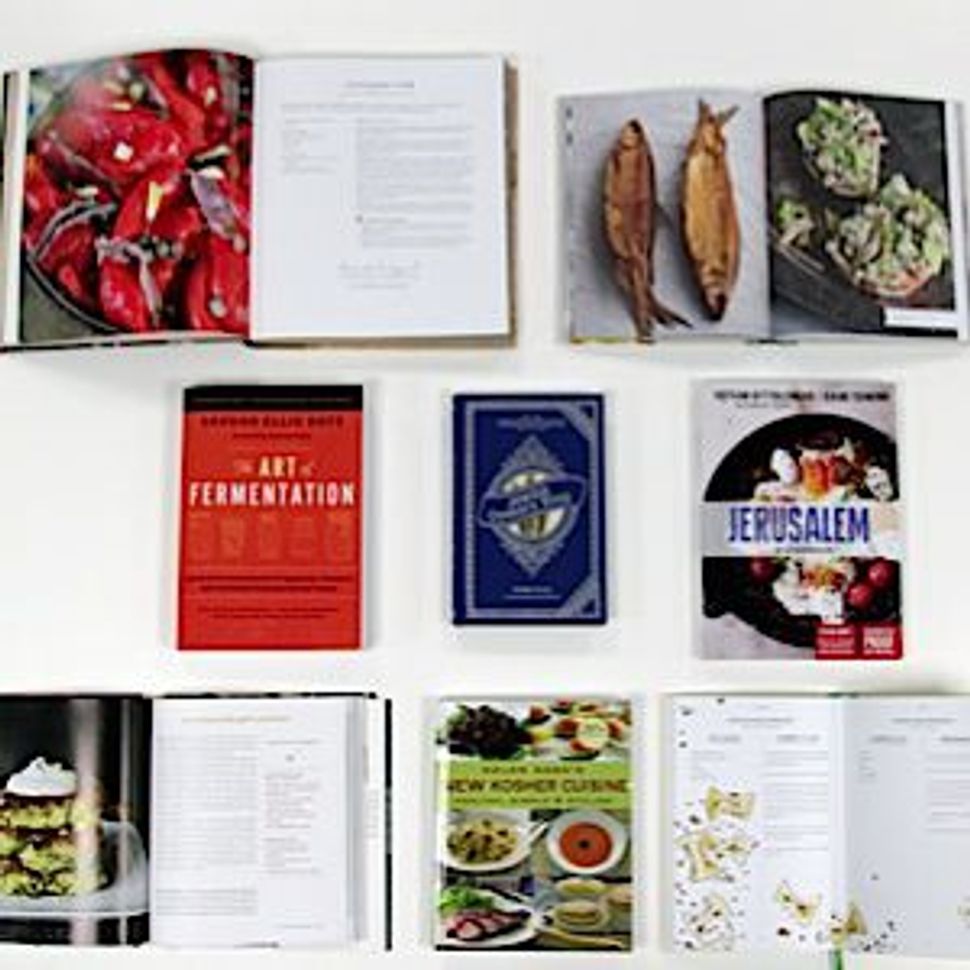 This year my desk has been strewn with cookbooks containing recipes for homemade pastrami, sweet potato and farmer cheese blintzes, German Jewish cakes, Sephardic treasures from the island of Rhodes and delicious dishes to keep one warm during the winter. These cookbooks have called me to the kitchen and many have made appearances both at my dinner table and at the table of the reviewers below. The books have coached us through fermentation experiments, allowed us to travel to Zimbabwe without leaving our kitchens and helped us understand the culinary legacy of Jerusalem’s diverse population.

From our eight favorite books from the year — one for each night of Hanukkah — we present two below. (Check back every day this week for another two books.) They are all great holiday gifts for the passionate cook in your life or a treat for yourself.

A Borderless Kitchen for the Mideast Maven

Few 2012 cookbook releases were as highly anticipated as this fall’s “Jerusalem,” and for good reason: The authors, Sami Tamimi and Yotam Ottolenghi, make for good press. Tamimi, a Palestinian, grew up in East Jerusalem, while Ottolenghi, a Jew, was raised in the Western portion of the city. They met as young chefs in London, and formed a professional alliance — five restaurants, three books and counting — that shows no signs of slowing down. This begs a question: Were it not for the compelling back-story, could the cookbook’s spine stand as straight? Thankfully, the answer is a resounding yes. Not only is “Jerusalem” exquisitely photographed, but the recipes — colorful, lavish salads, nut-studded stuffed vegetables, one-pot Palestinian holiday dishes — are bolstered by meticulous historical research and highly personal recollections from the two authors about their family-food morays. The authors’ harmonious narrative balances the scales of a city and cuisine more regularly viewed through a singularly Western, Jewish prism. In sharp contrast to most stories about Jerusalem, theirs — recounted in pomegranate seeds, cuts of lamb and saffron threads rather than chronicles of holy wars and conflict — celebrates the food in its element, putting forth a seductive argument for an edible coexistence that will likely outlast any political treaty.

Plane Ticket to Rhodes for the Globe Trotter

Part memoir, part history of the Jews of Rhodes and part cookbook, “Stella’s Sephardic Table” is a beautiful tribute to Stella Cohen’s ancestral home. Although she grew up in Zimbabwe, Cohen always felt a strong connection to the Greek island Rhodes through her mother’s cooking, the stories of her great-grandfather Yaacov Capouva (a respected sage and rabbi of Rhodes) and annual trips to the island.

The coffee table-sized book is a labor of love, with more than 250 recipes, gorgeous color photos, clear instructions, a glossary of ingredients and terms, and even a section featuring Cohen’s paintings. “This book,” Cohen explains in the introduction, “is a collection of my most-loved traditional Sephardic everyday food and festive dishes from Rhodes.”

The recipes in “Stella’s Sephardic Table” tell the story of the Diaspora and the myriad influences on the food of Sephardic Jews, incorporating aspects of Spanish, Ottoman Turkish, Greek and in this case even African cuisines. From Turkish kebabs to African piri-piri sauce and from Greek meatballs to Spanish fried rice pilaf, Cohen paints a picture of her heritage and the beautiful flavors that come from it.