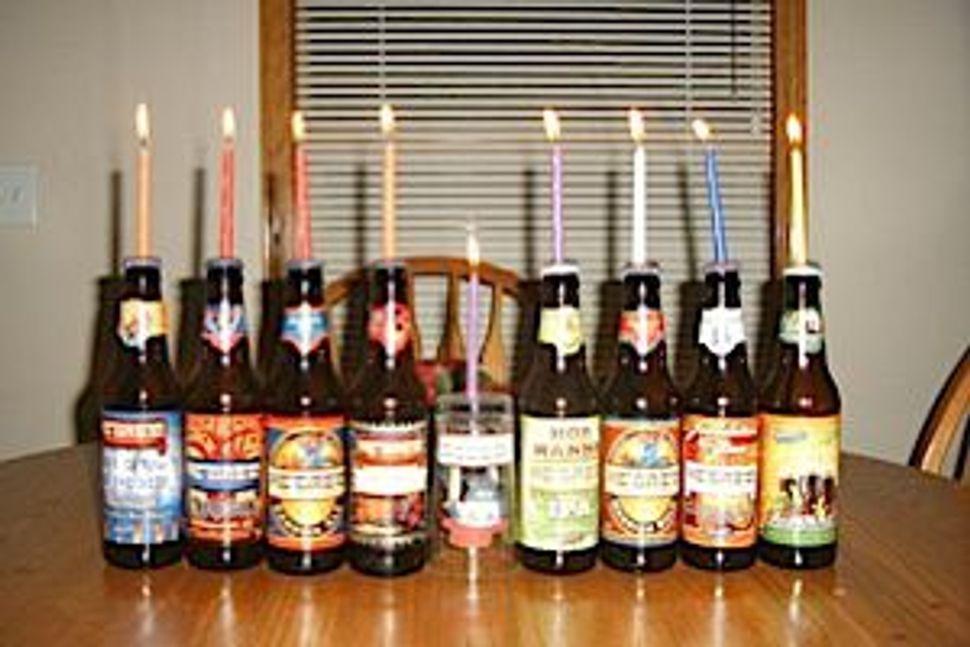 Sombreros, kegs, and teddy bears surround the gleaming Hanukkah lights, on display in a album on Shmaltz Brewing Company’s Facebook page. But what distinguish these holiday scenes are not accessories but rather the very menorahs themselves — they’re made out of beer bottles. They are all entries in Shmaltz’s annual Beer Bottle Menorah Contest, an online holiday contest that is now in its third year.

A beer bottle menorah is exactly what it sounds like: eight brewskis lined in a row, with Hanukkah candles sticking out of them. The problem is how to get those candles to stay put. Creative solutions include placing playing cards, tin foil, upturned bottle caps, and even small dreidels on the top of the beer bottle — all in order to hold that candle in place. The guidelines for last year’s contest offer little help: “We realize the traditional candles still will not fit in the top of the bottles, but we are a handy people from tent dwellers to Jewish carpenters to craft brewers. Behold! A second chance to prove yourselves.” They suggest stuffing a matzo ball in the nape, as a way of holding the candle in place.

Shmaltz’s proprietor, Jeremy Cowen, thought up the contest idea on a whim three years ago. “It was one of those late night ideas that I thought would be hilarious,” he explained. “And now it’s been three years. People get really into it, it’s fun.” The Beer Menorah Contest takes place entirely on Facebook. Entrants post photographs of their creative constructions on Shmaltz Brewing Company’s Facebook page. The pictures are gathered into an album, with votes tallied via likes. The picture with the most wins “glory and prizes,” according to the rules.

All of the materials are provided in Shmaltz Brewing’s Holiday Gift Pack. Included in the $29.99 smorgasbord are eight diverse seasonal beers, a shamash (additional empty beer bottle), a limited edition Shmaltz beer glass, Hanukkah candles, and instructions on how to build your very own Beer Menorah. More witty than practical, the instructions enjoin you to “Decant your Chosen 1st Night beauty into the Sweet, Sweet 16 Chalice,” and then “Ready, Aim, Shamash, Candles, Fire!”

About 30 people have participated in each contest, as evident on the company’s Facebook page. The menorahs range from the mundane to the absurd. Some of the images look professionally photographed, while others glow with the instant nostalgia of Instagram. In one memorable entry, two naked older men sit grinning in a hot tub with their menorah beaming in the background. They each hold a mug of beer and wear signs around their necks, one indicating “Jew” and the other, “Gentile.” This popular photo received a respectable 38 likes and 14 shares. Another contestant donned a menorah hat and surrounded his beer bottles with Hanukkah teddy bears, receiving a modest but respectable five likes.