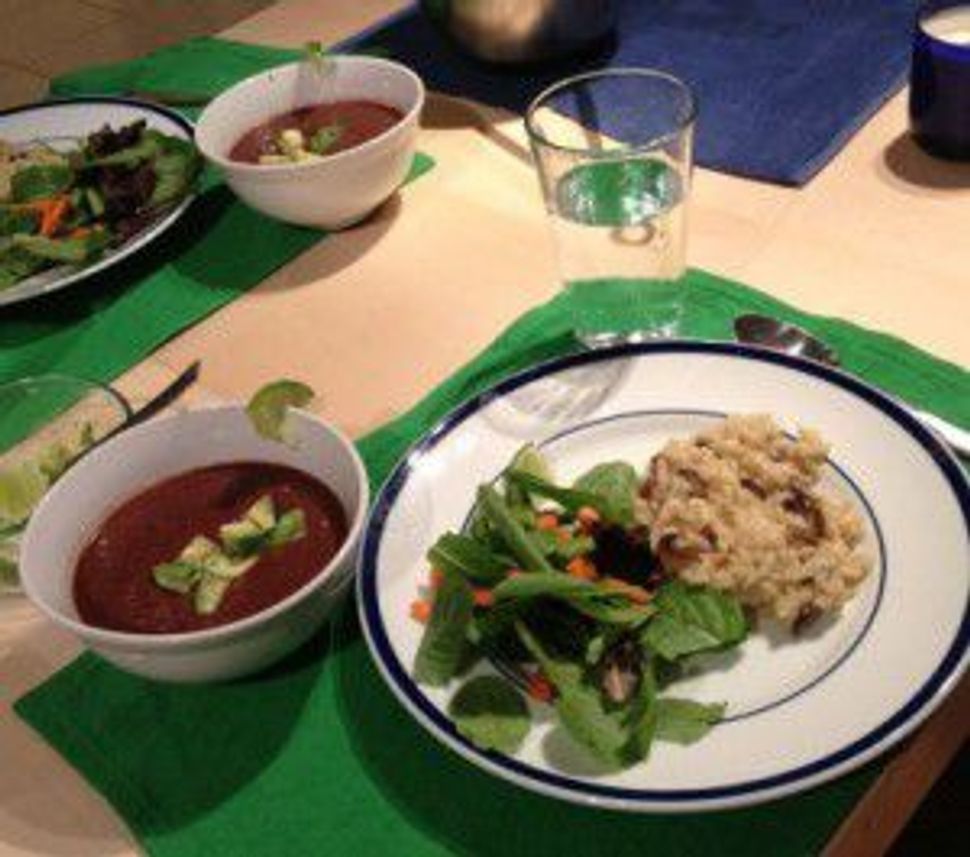 Yet, these ideas felt right to me, even in a 21st-century life not driven by literal interpretations of the Torah. I knew I would find satisfaction in my challenge to eat in (no takeout orders, sit-down restaurants, or coffee from a barista) for the first month of the new year.

Before partiers even donned their 2013 glasses and sparkly hats, I became more aware of the questions I took with me throughout the day: Should I whip up breakfast at home, or pick up coffee and a muffin once I get to work? Should I stop for an order of fried yucca to pair with leftover lentils for dinner, or can I hold off long enough to cook something fresh? When travel made me dependent on fast food or per diems meals, I never felt completely full. I realized that I did harbor a touch of the lost babe.

So it was with relief and invigoration, rather than my initial dread, that I sat down to my second week of January meals. I hit my stride that weekend, when I (fittingly) went on a grain kick. The Shabbat meal I shared with my boyfriend centered on polenta. I topped the satisfying corn mush with mushrooms and sundried tomatoes and accompanied it with salmon filets and a salad. The next night, we had risotto with saffron, lavender from my summer garden, and the rest of the mushrooms. I added a simple black bean soup and more salad. I wasn’t growing my own grain quite yet, but I think Achai would have approved.

Early the next week, I took on the bread. Okay, I didn’t actually bake it myself. I did, however, turn a store-bought baguette into a homemade version of Turkish street food. I was pretty proud of myself. I fancied it the sort of challenge that spawns Food Network shows and mints culinary celebrities: Today on “Woman v. Street Food,” can our contestant from D.C. make Istanbul-style fish sandwiches in her own kitchen? Look at that, folks – she can! Then I actually did bake, filling my apartment with the cinnamon and cardamom scent of my zucchini-chocolate-nut bread. Achai couldn’t deny that I was fully alive now. Heck, I was on fire.

There was a problem, though. Making my own food started to threaten my social and professional life. Sure, dinner at home with my boyfriend was fine. The couple-eating-in scenario is as comfortable as a stuffed teddy bear. And the popularity of DIY food concepts like canning, gardening, and potlucks put the Beanie Baby craze to shame. The mid-week lunch and the networking coffee, however, are horses of a different color. They remain strictly eating out activities.

As I faced both of these situations mid-month, my question mill again started humming. Will my friend think I’m weird if invite her to my apartment instead of a café for lunch? Might that colleague find zucchini bread in Pyrex unprofessional?

The first problem wasn’t such a big deal. The lunch friend, I soon concluded, was close enough to embrace the idea of lunch in. She was the inspiration for that Turkish street food, in fact, having traveled to Istanbul and discovered balik ekmek with me. The baguette, slathered with mayo and mustard and cradling broiled cod, homemade kimchi, and thin-sliced onion, was a hit. Miriam stayed for a work session at Café Rhea, sipping tea and working on her laptop in my living room.

Next, it was time to meet the colleague for coffee. As it turned out, he saw my writing about the 31-day challenge beforehand, so we had discussed it and even coined the acronym BYOC before we met up. On the appointed afternoon, we headed to one of the lounges ubiquitous to academic buildings, then proceeded to drink hot beverages we hadn’t bought and snack on homemade zucchini bread.

Yes, my challenge and all of its questions seem to be lining up. Yet there is another hitch. All along, I’ve known that this project can’t work for just any lost soul, or even for myself at all times. For some, eating in isn’t a romantic idea at all. It’s just life. When I earned so little that takeout hardly entered my inner food dialogue, the occasional lunch out (rather than a self-imposed month of eating in) could mean satisfaction. Right now, eating- in means something different to the 38 million Americans who shop on a food stamp budget. For busy families, cooking at home is a necessary chore – if not a financial requirement, still easier than herding the kids into the car or making them wait through a lengthy ordering and delivery process.

Already, my teaching duties have stiffened the flexibility I enjoyed earlier in the month. Which means it’s just a matter of time before the burrito place across from campus glows with allure. But those thoughts deserve their own post entirely.

Rhea Yablon Kennedy has written about food, culture, and sustainability for The Washington Post’s On Faith blog, Washington Jewish Week, Examiner.com, and Edible Chesapeake magazine. Rhea lives in Washington, D.C., where she also teaches and gardens.