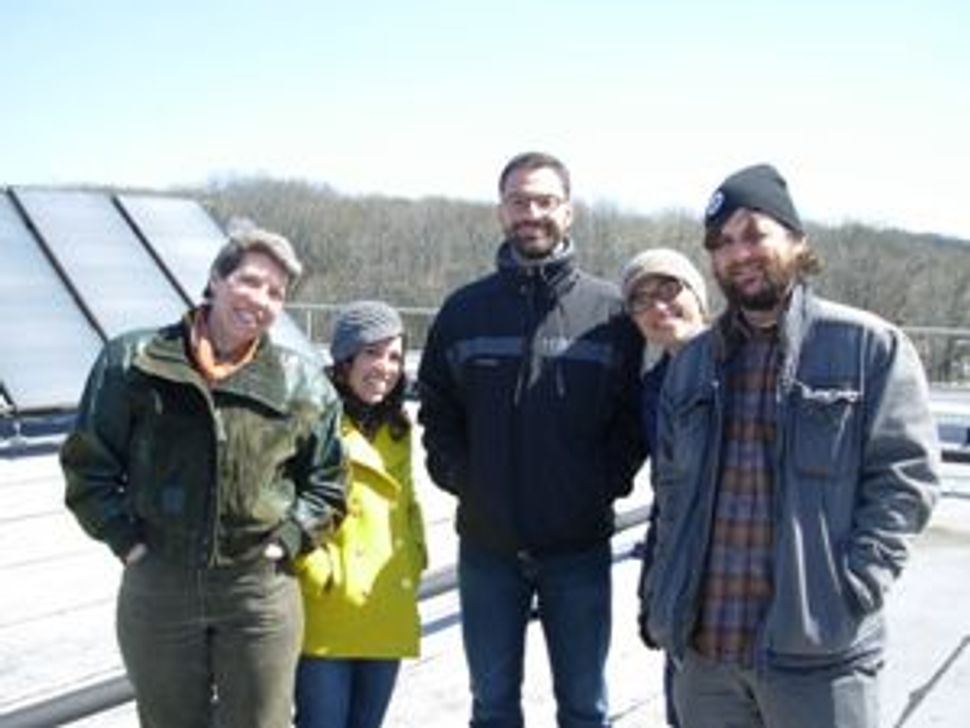 With terms like “CSA” (community supported agriculture) and “CFL” (compact fluorescent light bulb) becoming increasingly common, it’s easy to be excited and quickly overwhelmed by climate change and sustainability. In an interview with Mirele, she explained, “It’s hard to think of things to do between changing your light bulb and saving the world; as a community we can make a difference in ways that we can’t as individuals. That is what the Jewish Greening Fellowship is about.”

Tonight, an eclectic and important group of people will come together to launch the Jewish Greening Fellowship’s third class of fellows. Staff and volunteers from 21 organizations will come together to make a commitment that over the course of the ensuing 18 months they will improve their energy efficiency and reduce greenhouse gas emissions, create more sustainable operations, and grow their Jewish environmental education programming. They will return to their respective institution and form a “green team” to help them achieve these goals. If the success of the previous fellows is any indication, they will no doubt save money and transform their institution in a serious and meaningful way.

Since 2009, the Jewish Greening Fellowship has grown to incorporate 37 organizations including JCC’s, synagogues, day schools, and social service organizations all over the New York area. JGF has transformed these organizations into leaders in Jewish stewardship. The motivations for joining the fellowship vary from professional development to looking for ways to reduce costs. The fellows themselves are also a varied group who can be interns or rabbis or board members. However, one thing remains the same; after 18 months, budget costs are down and a community has been transformed.

For Congregation Beth Elohim, a large Reform congregation in Brownstone Brooklyn, who participated in the first class of fellows with JGF, this transformation not only reduced their waste but also their changed the Shabbat atmosphere. Instead of using disposable cups for Kiddush on Friday night, they switched to re-useable glass goblets. At first they were worried that the cost of what would inevitably become broken glasses would end up surpassing the cost of one-time use cups. Isabel Burton, the Revson Fellow for Community Organizing at CBE, said that they have not had a problem with broken glasses yet and it has significantly added to the Shabbat atmosphere.

Another telling example comes from The 14th Street Y summer camp at the Henry Kaufmann camp grounds in Staten Island for nearly 600 children who were snacking on processed snacks. After joining the Jewish Greening Fellowship, the camp has created a sustainable snack program whereby a local farmer brings in fresh produce from the farm 3 days a week. The Suffolk Y ran a Passover program where participants baked Matzah in solar ovens. While it may not be strictly kosher for Passover, the educational component is second to none. Having children eat and learn about local food and sustainability changes the future in a very big way.

Of course, JGF isn’t only about educating children. At a senior center that serves patients with a history of mental illness, a JGF fellow created a hydroponic farm. At the Y of Washington Heights and Inwood, they were able to totally eliminate disposables from their senior lunch. There were various issues pertaining to kashrut and who would be responsible for the dishwasher, but after working through these issues and purchasing a dishwasher they found the response and impact to be incredibly positive.

Beyond programming or small changes to the menu, JGF can have significant impact on an institutiton’s budget. The Staten Island JCC had an energy bill of $500,000 per year. As a result of the fellowship, the JCC reduced its energy use and became more sustainable. They were reinvigorated by the change, and it has made them leaders in the local community. Since then they have raised over 1 million dollars, and received an award from the Chamber of Commerce for environmental leadership.

Each of the 37 alumni organizations has its own remarkable story to share about the way they have transformed as individuals, as institutions, and as a community to build a better and more sustainable future. “JGF puts the Jewish value of Tikkun Olam (Repairing the World) into action in the most literal way,” said Goldsmith. “Climate change is a disruption to our earth, and it needs to be repaired. Jewish Greening Fellows have the opportunity to begin this process of repair, and become role models in their community for others to do the same”.

According to Goldsmith, there has been a big change in the Jewish community in response to climate change. “It’s not enough”, she says, “but at least there is an awareness”. For now, the Jewish Greening Fellowship exists only in the UJA-Federation of New York catchment area of New York City, Long Island and Westchester. Hopefully in the future the model will be adopted across the country so that other institutions can reduce costs and emissions while educating their community.

Perhaps simply from this article you are inspired to change your light bulbs to CFLs or to give up Styrofoam or to try to make it to the farmers market. Perhaps you will start a conversation with your family and friends or your office about ways to be a little bit greener. You will see how simple it can be toturn Jewish values into action and become a leader in the Jewish and local community. And perhaps one day, you will also be able to raise millions of dollars toward a brighter future. Whatever your path may be, remember; it all starts with the silverware.

Liz Traison is a recent graduate of The University of Michigan where she received a BA in History and Judaic Studies. She also studied at Midreshet Lindenbaum and Hebrew University. She is thrilled to be a Program Fellow at Hazon and also to be doing social justice programming forMASA Alumni. She likes being outside, particularly on Skeleton Lake. And also being inside, specifically doing creative workshops in prison.