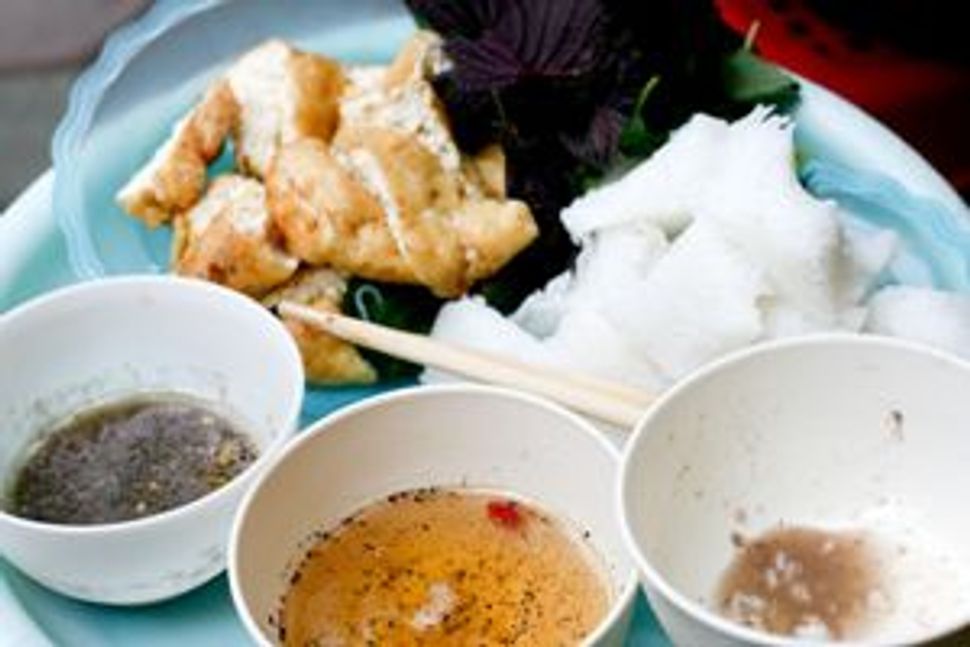 Most of the time, I do what I want. It’s what’s so great about being an adult. I get to eat baked potatoes at midnight and watch terrible television by myself. I get to choose the music I listen to, the clothes I wear, the jobs I keep.

I’ve kept kosher in my own way for as long as I can remember. It used to be that I wouldn’t eat meat and milk together, and wouldn’t eat shellfish or pork. Those rules, though a loose interpretation of the laws of Kashrut, meant something to me. They kept me tied into my history, my Jewish inheritance. But sometime in my mid-twenties, I began to slip. First I had chicken and cheese together. Then I ordered a turkey and Swiss sandwich. Last year I had a cheeseburger for the first time.

When I first broke and mixed meat and milk, I felt nominal amounts of self-loathing and small pricks of regret, but mostly I just tasted juicy meat and salty cheese. I expected a shift in me, but nothing seemed to change.

The taste of the meat and cheese together wasn’t that great. It wasn’t the one thing I’d been missing, and it didn’t offer clarity about the original Jewish laws being useless or archaic. Kashrut always felt more intellectual to me anyway, not so much about the literal food I put in my mouth, but consideration for food in general. Consider what you’re shoveling down your gullet. Read the ingredients. Open your eyes before you open your mouth. I liked having a reason not to just eat anything.

And so what if I’d had meat and milk together? I’d still never touched shellfish, still no bacon, no swordfish or horsemeat. My Jewishness was becoming more acute, but was still measurable. When people asked if I had food restrictions and I described them, sometimes they knew right away I was a Jew. Like a lingering scent of the Old World, I carried these small burdens of tradition with me everywhere. I had a kind of Jewish accent, a mark.

I was proud of my arbitrary attachments to these last few laws of Kashrut. Most of the rest of my Jewish identity had all but disintegrated. I lost my love of synagogue sometime in the 90s, and I no longer went to High Holiday services or made strict plans to marry a Jewish man.

It wasn’t difficult for me to avoid eating shellfish. I never wished I could eat oysters, never dreamed of crab cakes or calamari or shrimp cocktails. My mouth doesn’t water at the thought of barbecued ribs, and I don’t covet bacon or ham sandwiches. I’d gone 27 years without trying any of these things, and it was easy.

I went to Asia for the first time last spring, and for those three months, I let myself off my own hook. I ate everything.

Three months of culinary bliss. Of eating every fried, steamed and sauced food on every street cart, no matter the color, texture or form. In an attempt at a kind of meditative consumption, I spent those months trying not to think about what I was eating—except for the intricacies of flavors, the histories and details of where these recipes must have come from, the faces of the people handing me the food.

Mostly I had no idea what I was putting in my mouth, but there were moments when I recognized the meat itself. In Thailand I ate a curry soup littered with chicken feet. The men around me picked at them thoroughly with their teeth. In the Gulf of Tonkin, sitting off the edge of a Chinese junk boat, the crew and I fished for baby squid in the dark, and the captain later offered me my choice of the raw fish, translucent blue on a white plate. In southern Vietnam, a small dog turned on a spit above an open fire while people sat around tables waiting for their dinner.

Upon my return to the United States, I immediately reverted to my old standards. Meat and cheese is a goner, but I still turn down shellfish and pork. And even I wonder why. What exactly does it matter after months of letting myself go? Why does it pain me to think about eating lobster or ham? What exactly do these rules add to my life? To my sense of self?

There’s something satisfying about saying no, and holding to these laws for myself, and not anyone else. Like a true adult. I’m making these decisions, and choosing what I want. And I’m choosing, in a sense, to be Jewish. To carry these small burdens of tradition with me into my future life.

Alyssa Kapnik is a reporter and producer at KALW, public radio in San Francisco. She also writes her own blog, produces a Jewish podcast, and takes photographs.