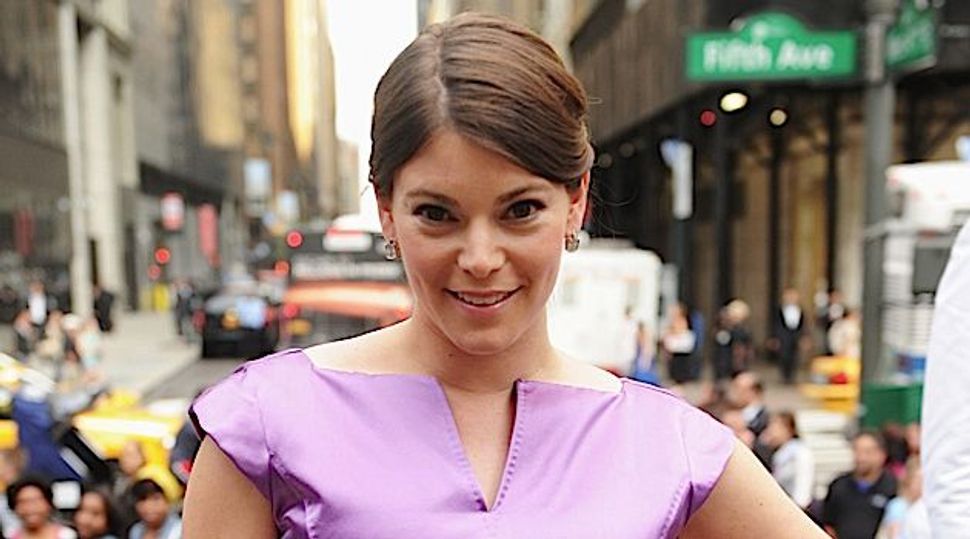 Out of the Kitchen: ?Top Chef? judge Gail Simmons, like many other food celebrities, has struggled with criticism of her body. Image by Getty Images

It’s nearly impossible to take your eyes off Nigella Lawson in the pilot episode of “The Taste,” ABC’s new reality cooking show that features 16 competitors racing to impress four of the world’s biggest names in food (of which Lawson is one). With her formfitting red dress cut tastefully down to there, soft brown curls, shapely body and creamy skin, she seduces you — not with her beauty alone, but with her charming personality and almost careless disregard for everything a female celebrity is supposed to look like.

“My dress is elastic; I’ve got lots of room!” Lawson quips in her proper British accent. “I love fat,” she adds, referring to fatty foods. And as viewers, we believe her.

The food world is having its Hollywood moment, which means it’s having its beauty moment, too. Talent and charisma are essential for any chef to make it big, but good looks remain a necessary, if not ironic, ingredient. Over the past decade — particularly since the arrival of the Internet, social media and HD televisions — a broad spectrum of manicured female celebrity chefs has emerged. Each one sells her own unique brand of food and femininity to viewers, but there is a difference between watching Giada De Laurentiis, who looks more like a model than a chef, and Ina Garten, who looks more like a mom than a model, teach you how to bake brownies.

“Attractiveness is still a plus on TV no matter who you are and what kind of TV you’re making,” explained food-world darling and “Top Chef” judge Gail Simmons in a phone interview. “There’s always going to be a standard that’s somewhat unrealistic, as long as we have the media and pressure from it.”

Yet two of the most successful women in today’s celebrity food world — Simmons and Lawson — are expertly navigating the crawl space between celebrity, food, healthy living and relentless beauty standards. And, they are both Jewish.

In the Jewish tradition, kitchens have mostly been the domains of women, where older generations teach children and grandchildren how to prepare family recipes for matzo ball soup, brisket and kugel. Jewish food is steeped in memory and tradition, and we learn how to cook from our wiser, softer bubbes, not from celebrities talking at us through a TV. Even Julia Child, America’s first celebrity chef, was more like a Jewish grandmother than a modern-day swan. She arrived on TV sets in the 1960s, a 6’2” giant with an odd voice and dowdy outfits; her success was about content and character, not cleavage or beauty. By the 1980s, businesswoman-turned-homemaking-queen Martha Stewart arrived; she was elegant but decidedly not sexual.

The cookbook author Joan Nathan followed in the same vein. In her PBS series “Jewish Cooking in America,” she dressed in sophisticated, modest clothing and focused on food and culture. “When I’m cooking, I care about the way food looks on the table as much as the way it tastes,” said Nathan.

“In the late 1980s, image wasn’t as important,” Tanya Wenman Steel, editor-in-chief of Epicurious.com, told the Forward. “It didn’t really matter what you looked like. It mattered what you knew and what you created. With the advent of the Food Network [in 1993], image became more important.”

Lawson, a TV personality-meets-food evangelist, has systematically flaunted her curves and unabashedly eaten her way to the top. Recently, she went so far as to demand that her stomach not be retouched in the promotional photos for “The Taste.” As she explained on her blog, “that tum is the truth and is come by honestly, as my granny would have said.”

Although Lawson’s Jewishness is not central to her public persona, it has played an important role in her story — her family is Jewish, and she publicly traced her ancestors’ Ashkenazi Jewish roots on the BBC’s “Who Do You Think You Are?”

Ultimately, Lawson’s unfettered (and very Jewish) embrace of food helped solidify her as one of the industry’s most powerful and positive celebrities.

“There is an authenticity and feeling with Nigella,” Simmons said. “And that’s why she’s had such a success. There’s a sensual seductiveness to her, but you know that she has eaten every bite of that dessert. So it’s okay if I do, too.”

It’s worth noting, however, that Lawson lost a significant amount of weight before “The Taste” aired in January. She declined to comment for this story. 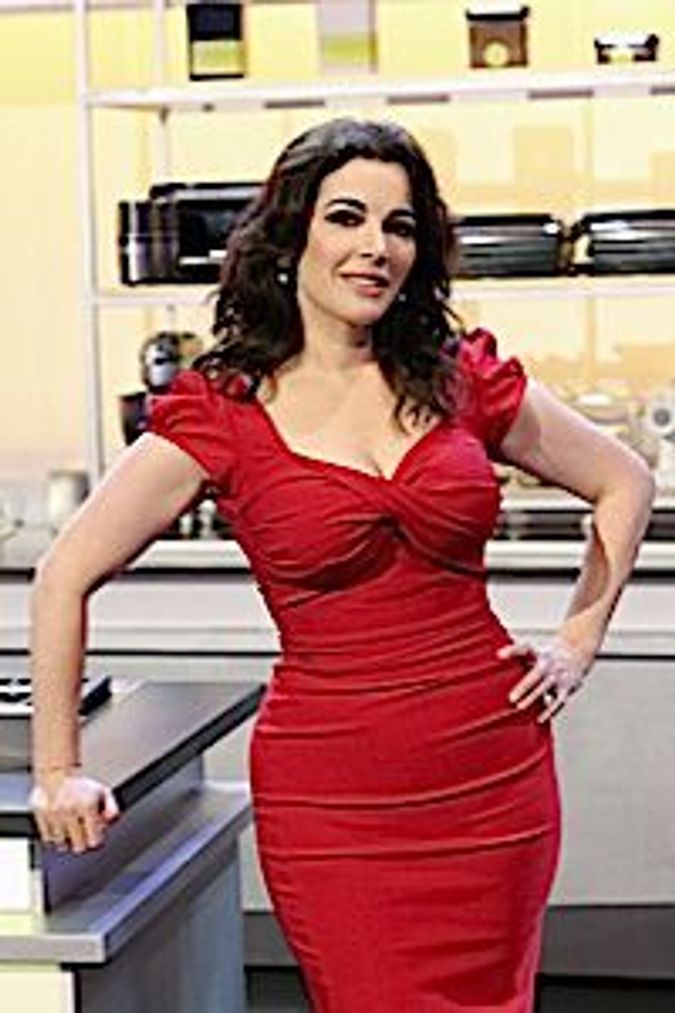 Lady in Red: Nigella Lawson seduces you ? not with her beauty alone, but with her charming personality and almost careless disregard for everything a female celebrity is supposed to look like. Image by ABC/Disney

Despite Simmons’s popularity and expertise in food, the question she receives most from fans and journalists alike is about how she stays slim while constantly eating. Adding insult to injury, she said that for many years, anytime you typed her name into Google, the first two auto-fills were “Gail Simmons pregnant” and “Gail Simmons weight.”

“I have never been pregnant! And for the last 15 years of my life, my weight has never fluctuated more than five to six pounds. But I consume calories for a living. At the same time, I am on TV for a living, so I have people staring at me and scrutinizing me for a living.” (For the record, “Gail Simmons latkes” is now one of the top three auto-fills in Google.)

How does she handle the pressure? She puts her food where her mouth is. “I am not afraid… that if I eat that cake I will be fat and no one will love me,” she said. “I am not defined by how I look.”

Simmons has her parents to thank for her levelheaded outlook. Growing up in a traditional Jewish household in Toronto, “we had Shabbat dinner every Friday night, without fail. There was always challah and my mother’s outstanding chicken soup,” she told the Forward in a previous interview.

Simmons’s family — especially her mother, a chef and food writer — prioritized positive attitudes towards cooking and women; food was about enjoyment and health, not anxiety. And that’s the message she strives to convey to women today.

Despite the examples Simmons and Lawson set for the masses, there is a reason why De Laurentiis — whose beauty is as important to her fame as her Italian cooking — is one of the Food Network’s biggest stars.

“Why is there a cleavage shot when she’s trying to teach us about a pasta sauce? It’s part of her image and it’s helping to sell her product,” cookbook author and food writer Kathy Gunst told the Forward.

If you aren’t a bombshell, you’re something else that’s equally as definable. Rachael Ray’s cute look, perky attitude and healthy physique reflect the food she cooks. (It’s a better fit than the one she tried in 2003, when she famously posed for a provocative FHM shoot.) Ina Garten’s appeal is that she looks and dresses like the average American woman, but she knows how to create elegant eating experiences. Still, heavier chefs don’t necessarily have it easier: Southerner Paula Deen weathered a very public scandal last year for pushing fatty, butter-laden food that was secretly killing her with diabetes.

Simmons and Lawson represent the coveted middle ground — two stunning, sophisticated women who are so beautiful they belong in Hollywood and so accessibly real that they could almost be your friend (albeit the prettiest one you know) you call for cooking wisdom.

It’s hard to find a solution to a problem that isn’t going anywhere. Fat or thin, punk or preppy, appearance will always be critical to success for aspiring food stars. But as Katherine Alford, head of the Food Network Test Kitchen, explained, “To be in the food media you have to be attractive, definitely, but if it’s too threatening it’s a problem.… In food, people are much more real.” Lawson and Simmons would toast to that.

Abigail Jones is the Digital Features Editor of the Forward. Email her at [email protected] or follow her on twitter @abigaildj