A Taste of the Shtetl at Warsaw’s New Jewish Museum 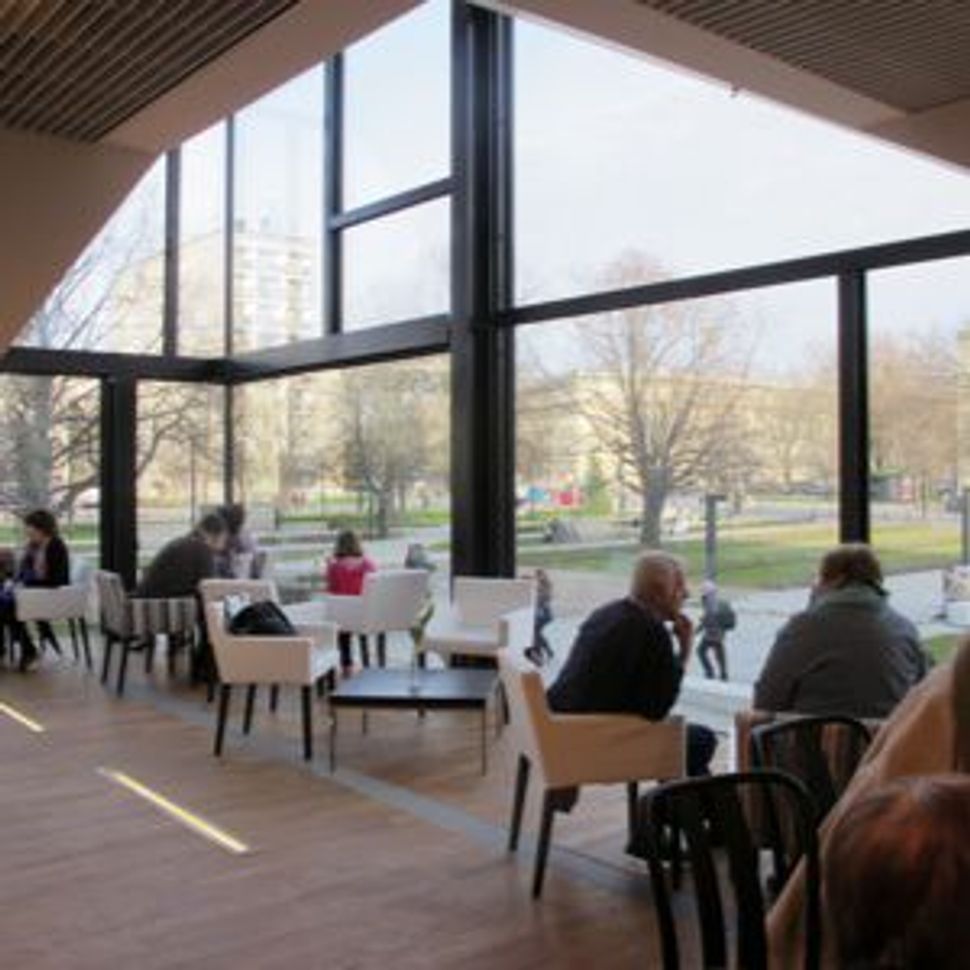 Lunch Options: Museum visitors grab a bite to eat at the cafe on opening weekend. Image by Ruth Ellen Gruber

Making sure food is part of a museum is not an easy task — fresh dishes will perish, plastic ones miss the point.

But, at Warsaw’s new Museum of the History of Polish Jews, food, drink and the special Jewish relationship to eating and drinking will be a recurring thread woven throughout the yet to be installed core exhibition.

The Museum’s striking building was opened to the public April 19, but its permanent exhibition, a narrative presentation of 1,000 years of Jewish life, won’t debut until next year.

“We don’t have separate sections on discreet themes such as women, children, dress, or food,” said Barbara Kirshenblatt Gimblett, the NYU scholar in charge of the team putting together the core exhibition. “There are no encyclopedia entries.” Rather, she said, food, drink and issues related to them would be addressed within the context of the chronological narrative.

For example, she said, the first Hebrew book printed in Poland was Isaac of Dueren’s “Sha’arei Dura,” a 16th century treatise about ritual purity, mainly dealing with the laws of kashrut and women’s ritual purity. “The book tells how to apply the laws of kashrut to everyday life,” she said. “The first pages are about salting meat” and there are practical descriptions of what to do in specific circumstances.

In the medieval gallery, she said, “there will be a whole section on trade, including the trade of spices, as an aspect of the economy.”

In another gallery there will be a section mocking up a market stall, with a focus on three key items of the Jewish table — garlic, goose and herring. Using old texts and other sources, she said, “We’ll show how goose fat was the ‘Jewish lard,’ how garlic was considered an aphrodisiac, and how there were discussions in a 17th century Yiddish medical manual about whether a fish could be considered meat.”

One particular hero of the exhibit is Ber of Bolechow, an 18th century wine importer who wrote an autobiography in which he detailed wine purchasing journeys to the Tokaj region of northern Hungary. “Jews were important in the alcohol trade, and we will be putting this into historical context,” she said.

In addition to these historical references, visitors to the museum will be able to enjoy a first-hand taste of Polish Jewish cuisine in the museum’s restaurant. “They asked me to prepare a menu with local and seasonal dishes that are Jewish — but which Polish visitors will also recognize as part of the culinary tradition.”

A Taste of the Shtetl at Warsaw’s New Jewish Museum