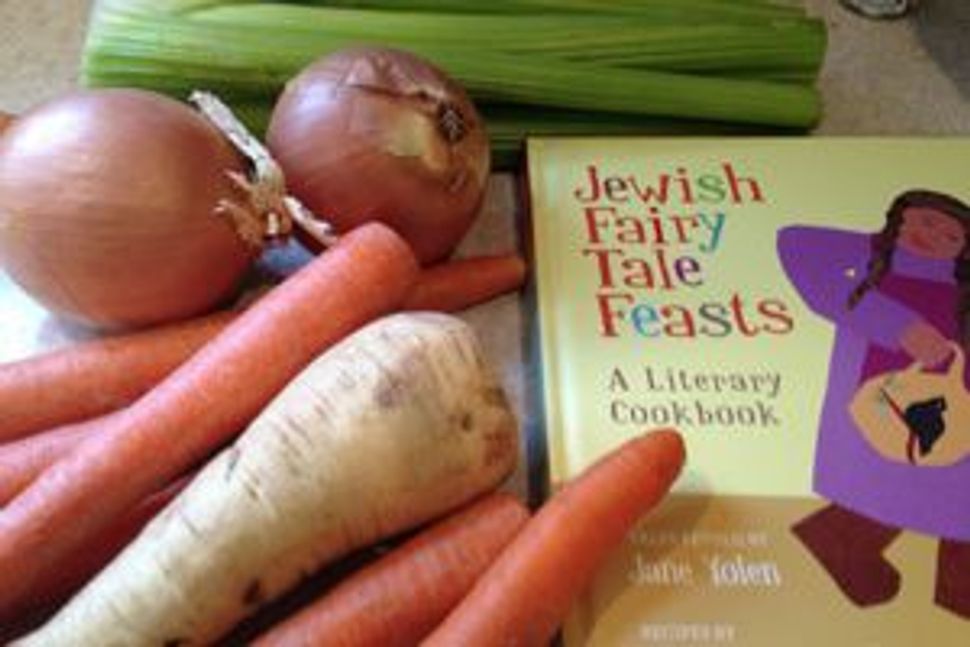 I almost choked on my coffee when I read the email from my editor asking if I would be interested in reviewing a cookbook. The thing is, I don’t cook. I can prepare a few simple dishes (think fried egg or cheese quesadilla), but any “real” cooking — the sort that might involve following a recipe, mixing more than three ingredients, or using “herbs” and “spices” is definitely not on my skill list.

I was just about to say no when I realized that the book, “Jewish Fairy Tale Feasts” included Jewish folk tales and was written by Jane Yolen (author of the beloved “How Do Dinosaurs” series, along with about 90 other books) and her daughter, Heidi Stemple. I was intrigued, even if it meant cooking.

I can honestly tell you that this is the first cookbook I have ever read in one sitting. It’s a beautiful hard-bound book with lovely illustrations by Sima Elizabeth Shefrin throughout. In a time when all fairy tales seem to be variations of the orphaned-girl-turns-princess variety, I was grateful for the diverse, authentic, and engaging details of Yolen’s retellings of traditional stories. There are rabbis and prophets, wise women and foolish men, yahrzeit candles and chuppahs, and of course, lessons related to justice, tzedakah, and a range of Jewish values I am working to teach my daughters every day.

The girls (ages 4.5 and nearly 3) and I have read several of the stories together, and I was pleasantly surprised by the conversations that ensued. “The Latke Miracle” is the story of a poor widow who has no flour or oil for Hanukkah, but she is willing to welcome a stranger into her home nonetheless. She and her children are rewarded for their generosity with coins and food. My older daughter remembered the gifts she got last year for Hanukkah, and we talked about how she would feel if she got oil and flour as presents (not very good, apparently). But then we discussed what it would be like to get those if she didn’t have enough food to eat, and she agreed that they would be a pretty good present, if she could only to learn to cook. 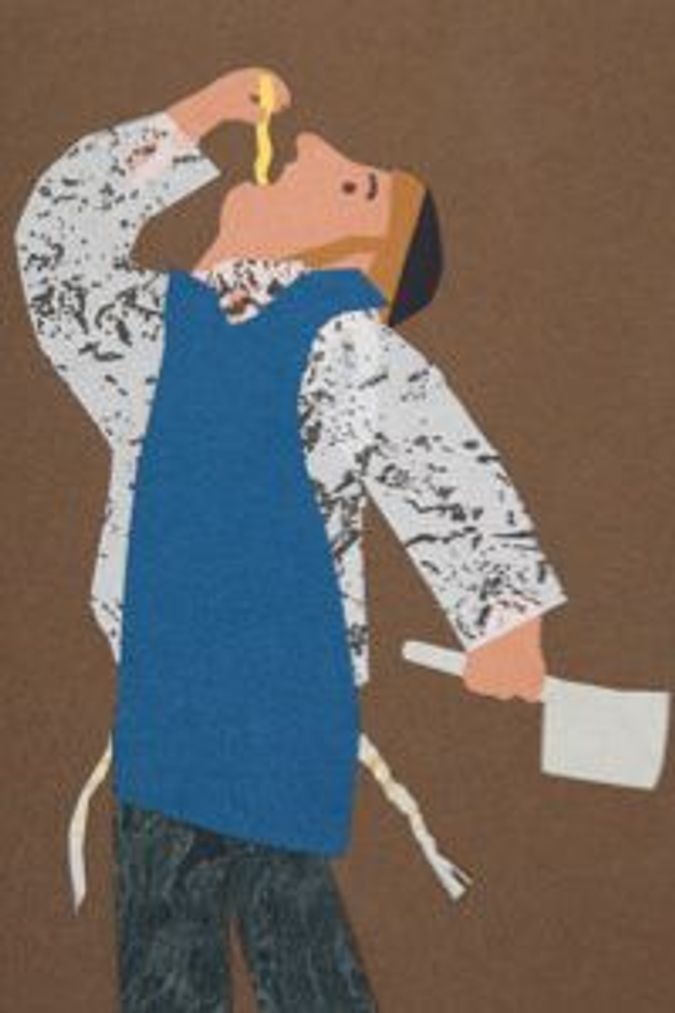 Which, of course, brings us to the recipes — 18 in all, each one matched to a thematically-relevant story — everything a good Jewish mother who actually enjoys cooking could want: latkes, blintzes, matzo balls, noodle kugel, rugelach and hamantaschen. I was immediately drawn to the Chicken Soup recipe. Despite the fact that I have little interest in learning to cook, it has always bothered me that I am a Jewish mother who has never made chicken soup. (Unless you count opening a can and heating it in the microwave, in which case you are probably my kind of people and we should talk.) I decided I had to make the soup.

The recipe was surprisingly easy to follow. Except the parsnips. I didn’t exactly know what parsnips looked like. Or how they tasted. Ok, fine. I’ll admit it. I had no idea what a parsnip was. I swallowed my pride at my local hippie grocery store and asked for help. I know, I know, a Jewish mother who can’t identify a parsnip — it’s a shande. I am, however, well acquainted with carrots (I even bought the real ones — not the baby ones that come pre-peeled and sliced!), onions, celery, garlic, and lemon. (Thank goodness Stemple thought to suggest the idea of the prepackaged “soup mix” of herbs — I can’t tell dill from rosemary, nor do I have any idea which belongs in chicken soup, so that was a big help.)

I took it all home, I took a deep breath, and I made chicken soup.

As I was peeling and chopping and failing miserably at finding a simmer, I thought about Yolen’s stories and Stemple’s recipes. I thought about the men and women in those tales who didn’t have grocery stores or rotisserie chickens or battery-operated timers or gas stoves as they learned to cook. What they had was the wisdom and experience of their ancestors, their families, and their communities. As I served the chicken soup to my family for Shabbat dinner (predictably, my husband and 2 year old loved it; my 4 year old refused to even look at it), I realized that this beautiful book had given me access to some of that knowledge and wisdom as well. Don’t quote me on this, but I would have to say that it definitely made it all worthwhile.

Now I just have to decide if I’m brave enough to try the mini-cheesecakes in time for Shavuot.

There are lots of soup rules: Don’t let it boil, because it will cloud. Cover the pot. Don’t cover the pot. Skim the fat. Don’t skim the fat. I tend to ignore all these rules, throw everything in, and just cook the soup. No one ever complains, and I think it tastes just fine. Add matzo balls, some fresh dill, and it is perfect. Add noodles, pasta stars, or rice for a different soup. Have fun.

Chicken (uncooked—use whatever pieces and parts are available or the least expensive. Grab a couple of leg quarters and some wings or use a whole cut-up bird. You can also use leftover cooked chicken from the night before or a rotisserie chicken that’s already cooked)

large handful of fresh herbs (whatever you have in your fridge, garden, or grocery store—you can even buy a “soup mix” of fresh herbs in the produce section)

1) Put the chicken into a large pot and sprinkle with salt and pepper.

2) Fill the pot with cold water up to the top of the chicken and then another inch or two. Set it on high to boil.

3) Prep the vegetables, herbs, and lemon: Cut the ends off the carrots, parsnips, and celery. Wash them and, if you want, peel the carrots and parsnips (I don’t peel because I like the texture better that way). Cut the ends off the onions but leave the skins on. Wash the lemon and cut it in half. Peel the garlic cloves. Remember, you can use these ingredients or any others in a chicken soup. No ingredient, except the chicken, is vital. Soup is about what you want in it.

4) Toss all the vegetables, half lemon, and the handful of herbs into the pot with the chicken. Bring it to a boil, and lower the heat to simmer.

5) Cook for two or three hours (less if you are using already-cooked chicken). Check every once in a while and stir it around.

6) When the soup is done, let it cool a bit. Now you have to separate what you want in your soup from the stuff you do not. First, either remove everything from the broth with a slotted spoon and tongs, or pour off the broth by placing a strainer (colander) in a large bowl and pouring the entire pot slowly through the strainer. This will capture the broth in the bowl and the rest in the strainer. If you have used the strainer method, pour the broth back into the pot. Next, chop the chicken meat and the vegetables into bite-sized bits, and put them back into the pot with the broth. Discard the rest (the lemon half, the onion skin, the bones).

7) Sprinkle with fresh dill before serving.

8) Serve the soup with matzo balls, rice, noodles, pasta stars, or just as is.