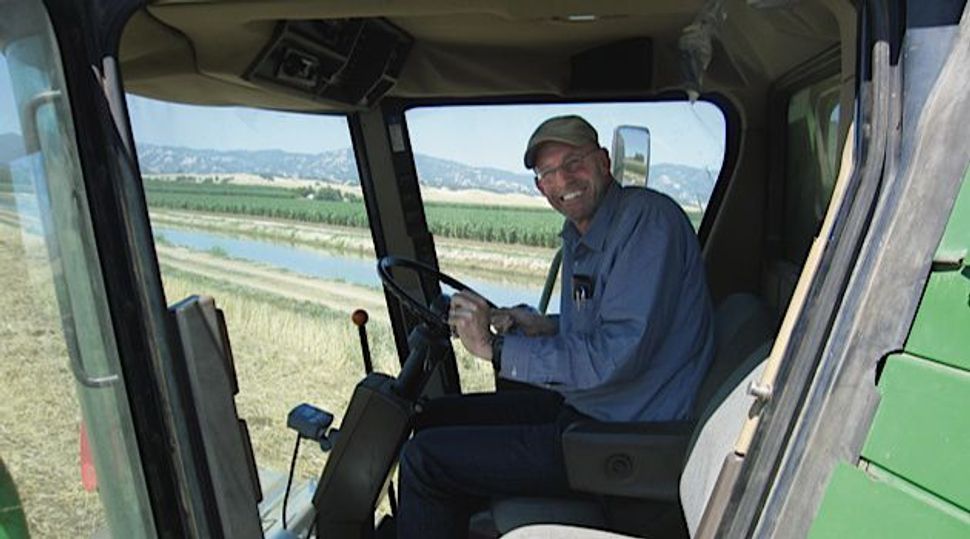 Field Work: In researching ?Cooked: A Natural History of Transformation,? Michael Pollan harvested wheat (above), made cheese with a microbiologist nun and learned to roast a pig. Image by Courtesy of Michael Pollan

Michael Pollan considers himself a nature writer, but since publishing “The Omnivore’s Dilemma” in 2006, he’s become a major voice in the cultural revolution currently happening around such food issues as sustainable agriculture, health and locavorism.

Pollan is such a cult figure among foodies that people follow him around the grocery store and the farmers market in Berkeley, Calif., where he lives, just to see what he’ll buy.

His new book, “Cooked: A Natural History of Transformation” (Penguin Press) presents an analysis of the science and history of food preparation methods through time and across cultures, and a personal narrative of Pollan’s own relationship with cooking. In the section on meat, Pollan recounts the time his family summered on the beach and temporarily adopted a pet pig — named Kosher.

Forward contributor Sara Rubin caught up with Pollan by phone in Chicago, one stop on his 17-city book tour.

Michael Pollan: This book is completing this food chain from the earth to the body. “The Omnivore’s Dilemma” is about tracing food back to the farm. Then I wrote a couple of books about health. Along the way, I kept bumping into the fact that what happens in the middle of the food chain, where the food gets transformed, had an enormous influence on the two far ends of the food chain.

Many of the changes we see in agriculture are a result of the processed food industry and its needs for cheap meat, cheap sweeteners, cheap oil. The way we were eating influenced what happened on the farm.

If humans are cooking, people tend to eat healthy diets and not get into trouble with salt, fat and sugar.

I came to think this middle link was the most important and the most influential, and the one we had the most control over, too.

How do kosher food and preparation factor into your understanding of cooking?

Meat eating is always surrounded with lots of rules, because a lot is at stake. There is death, there is killing, there is sharing. That’s a good thing; eating meat is consequential, and it should be approached with a lot of consciousness and care, and that’s a very positive thing about kashrut.

I said semi-jokingly in this little sermon [on April 12 at Beth El Synagogue, in Minnesota], it might be time to reconsider pork as treyf.

The beauty of the kosher rules is that food choices should be informed by our ethics and not be careless and just about consumption or fueling up, and ethics change over time.

Pigs can be a very sustainable form of animal protein in that they’re the great recyclers in a sustainable food system. On the other hand, you have to weigh that against the value of several thousand years of tradition. That’s important, too. One of the reasons we have food is to help knit a community together.

Have you ever kept kosher?

I myself don’t keep kosher, but in a sense I do. I keep kosher in the sense that I have my ethical principles of eating meat. The form I inherited from Judaism — that eating should be informed by values — but the content is different.

You write, “Is there anyone who actually enjoys chopping an onion?” and then consider the Buddhist notion that it might be better to be in the moment and practice mindfulness when chopping an onion.

Chopping an onion is the essence of drudgery, what people don’t like to do. I was trying to get my head around how to do that with pleasure.

Knowing the science of it — why this onion is making me cry — it becomes more interesting to me. That’s one mode, the scientific mode.

Then there’s this mind-game mode. What if you were just present and didn’t fight it? What if when chopping onions, you just chop onions?

Whether we regard cooking as drudgery or alchemy is all in our head, depending on what we bring to it. When cooking is optional, you’re conflicted; couldn’t you be doing something else? Maybe taking a run or checking email?

I think we consume a lot of energy just dealing with the conflict that gets set up.

You give some examples of the food industry capitalizing on feminism by marketing prepared foods as a way to give women a break in the kitchen. Do you think we’re evolved enough as a society to have an equitable revolution in cooking as far as gender roles are concerned, or is that still an uphill battle?

I think enough history has happened that I don’t think women would accept that role [of going back to the kitchen]. I don’t imagine us turning back the clock.

In a way, the fact that we’ve skipped a generation of cooking means boys don’t know it’s women’s work. They see these macho guys cooking on television.

If we are going to rebuild the culture of cooking, I think we need to finish the conversation about the division of domestic labor. I hope we’ll come out to a place where we are cooking again, and we are sharing the work, and bringing kids into it also.

Do you shop for specific ingredients, or are you like most of us, who rummage through the fridge and work with whatever we have on hand to make dinner?

I hate throwing out food. The prospect of doing that is one of the things that forces people to buy processed food. As one marketing consultant told me, “Fresh is a hassle.” But it’s also an opportunity; it’s great when there’s stuff in your fridge.

My standby is the frittata. You can saute vegetables that are past their prime with some olive oil or butter, scramble some eggs, mix it together and that’s a wonderful dinner that consumes a lot of leftovers and is also very cheap.