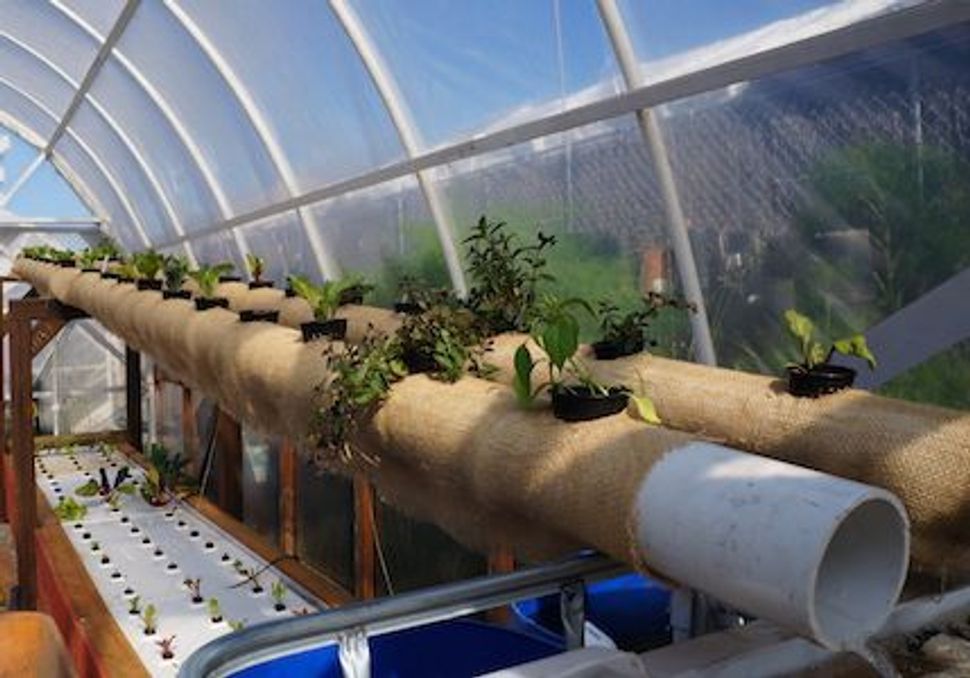 Image by Courtesy of: Kimberly Tomicich

This past December, an opportunity involving fish and plants swam into my life. At work, I was tasked with finding answers to the question: “Could aquaponics viably produce healthy organic produce faster and more efficiently than conventional soil- growing?” In seeking to answer that question, I became part of the small but growing world of Aquaponic farming. That’s aquaculture (raising fish) and hydroponics (growing plants in water, rather than soil) combined. Individuals who farm aquaponically are usually experienced with either aquaculture or hydroponics, and are drawn toward aquaponics for the added benefits that flow from marrying the two. Over the past six months, I have embarked on quite a journey–I’ve met inspiringly innovative individuals, I have grown to understand fish needs, and I’ve learned way more Chemistry than I bargained for.

I’m blessed to work at a glorious place called Urban Adamah, a nonprofit Jewish farm & education center in Berkeley, CA, where I have quickly become an aquaponic farmer. Though currently, I’m working on living up to the title. Rising Tide Aquaponics installed our beautiful system, and now I have the privilege of managing it. I’m finding that there is quite a learning curve when one begins farming aquaponically. I haven’t yet developed an eye for when spraying worm casting tea on the leaves could boost plant health, or the knack to know when adding chelated Iron might provide necessary nutrition. My mentor has a background in ecology and evolutionary biology, and it sure shows. This, however, is not to say that aquaponics requires a specific degree. The technique is fairly straightforward; training, research, and an experimental approach will suffice to equip one with the tools to become an aquapon.

If you’ve ever seen Koi fish swimming in a pond, you know how majestic fish can be. They’re colorful, robust, and maybe even a little bit silly. They come visit you when you feed them, and the rest of the time they show you how nice it is to just swim, eat, and poop all day. Some people would call it romantic. Maybe I’m one of those people. The best part is that fish have simple needs. As long as you feed them, and give them safe water and plenty of dissolved oxygen, they’re happy as clams. Luckily for aquaponic farmers, plants have simple needs, too. By finding the magic middle where fish needs and plant needs overlap, one finds where aquaponics can thrive. But, you may be wondering, why go to the trouble of trying something new if soil farming gets the job done? My hunch is that it’s because aquaponics provides a way to grow food quickly with little maintenance, reduce water usage, and circumnavigate the challenge of farming on polluted city soils. It is a symbiotic, recirculating system that involves the practice of growing plants directly in water, with fish supplying nutrients via their effluent.

If you’re grossed out at the thought of fish poo feeding your produce, consider how food grows in conventional soil farming; with fertilizer made from—you guessed it–-poo! Plants thrive on compost of many kinds, including compost from worms and fish. So, worry not–the growth process filters out any bacteria that could be harmful to human consumption.

From my perspective, the greatest beauty of aquaponics is its inherent guarantee of pure, clean, organic food. The fish are, so to speak, canaries in the coal mine: any hint of nasty industrial chemicals, pesticides, or other pollutants would quickly render the system ineffective and the fish dead. In a world where we unfortunately must question our food quality, aquaponics provides a beacon of hope.

During my time at Urban Adamah, I’ve learned a thing or two about how my tradition relates to some of the environmental and agricultural philosophies in which I believe. One Jewish idea that I feel supports aquaponic farming is expressed by Shimon Ben Azzai in Pirkei Avot 3, which tells us to reconsider waste: “Do not be scornful of any person, and do not be disdainful of any thing, for you have no person without his hour, and you have no thing without its place.” In Aquaponics, we rethink ‘things without a place,’ commonly known as waste. The system grows vibrant nutrition for life using a “waste” byproduct of fish life that is rarely considered for any use. Everything in nature contributes to the cycle of life, and aquaponic farming displays a way to respect and cultivate connections to that cycle. If that doesn’t qualify fish poop as romantic, I don’t know what can.

If you’re in the bay area and want to learn more, stop by Urban Adamah sometime and check it out. Or, contact me at [email protected]