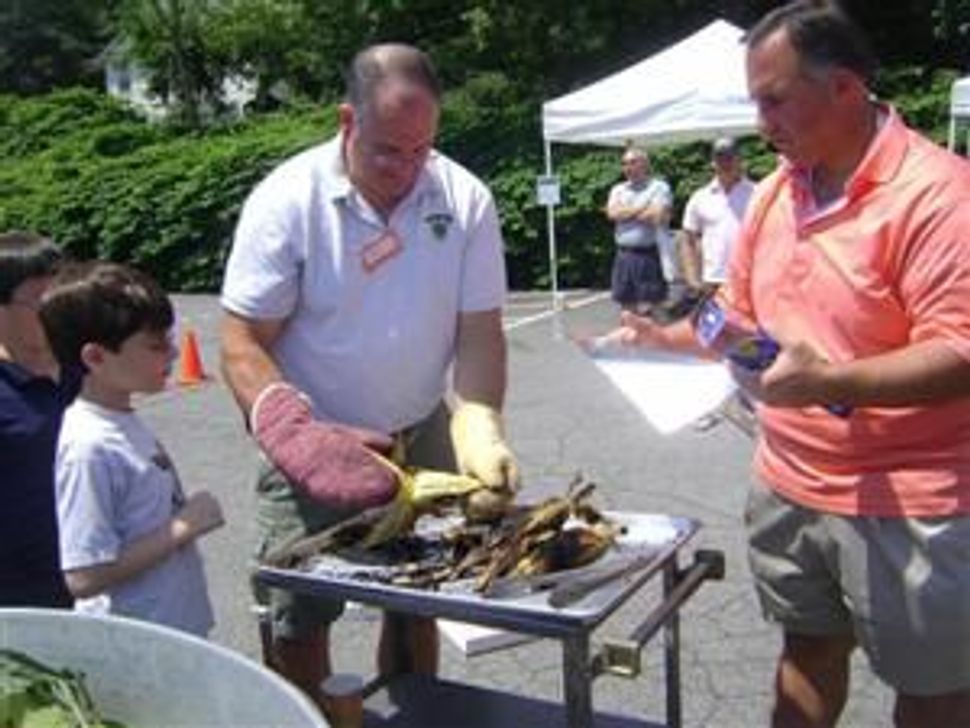 Fresh corn to market the Grand Opening of the Farmers Market at Temple Beth Shalom. Image by Courtesy of: Eytan Hammerman

One of the winners of the New York Ride mini grant from Hazon last year was Temple Beth Shalom in Mahopac, New York, a Conservative synagogue situated “where the country begins,” according to their local tourism slogan. The synagogue is led by Rabbi Eytan Hammerman, a 2010 Jewish Theological Seminary graduate and long-time friend of Hazon, from time of the organization’s founding. Rabbi Hammerman moved to Putnam County several years ago from White Plains, New York where he was the synagogue’s Rabbinic Intern. A highlight of his time in White Plains was his participation in the Tuv Haaretz CSA program which operates out of Temple Israel Center. He enjoyed the fresh fruits and vegetables that Tuv Haaretz provided each week. Upon moving to Putnam County (by bicycle, one Sunday morning – that’s another story), he surprised by the lack of CSAs or farmers markets “in the country.” He felt that the area was prime for a farmer’s market and wanted his synagogue to host the market. Coincidentally, a local landscaping business had the idea at the same time. After their first trial year, the synagogue and other business, together, opened the Mahopac Farmers Market, located each Sunday in the parking lot of the synagogue, at a central location in town.

Temple Beth Shalom initially approached Hazon and the mini-grant program to assist in funding the infrastructure needed to begin accepting EBT (“food stamps”) at the market. Unfortunately, the partners were reticent to introduce a government program into the market and the grant had to be repurposed. After much thought about the purpose and value of the farmer’s market itself, Rabbi Hammerman realized that one aspect of the farmer’s market that was lacking was the opportunity for customers to develop a relationship with the farmers themselves. It would be a positive experience for the residents of Mahopac to be able to get to know their local farmers and learn more about where their food comes from and how it is grown.

Rabbi Hammerman found that since many of the people coming to the farmers market were parents with multiple children, it was difficult for them to find the time to cultivate this sort of relationship with the farmers. Instead of lingering at the food stands, they were rushed because their children did not always want to be there for extended periods of time.

The solution for Rabbi Hammerman was to set up a bounce castle next to the farmer’s market so that parents could let their children play in the castle, giving the parents time to enjoy the market and utilize all that it has to offer. The bounce castle has been a huge success, turning the market from a rush-in rush-out grocery store-like experience, to a cause for lingering, Rabbi Hammerman explains. The relationship between the customers and the farmers has opened the door for the customers to learn more about their food and the people who make it. This is what Temple Beth Shalom was striving for when they established this farmer’s market in Mahopac – that it should be a place where members of the community become acquainted with the land around them.

For those of you who are already riding in the New York ride or would like to join, Temple Beth Shalom, the location of the Farmers Market will be the location of a rest stop along the way!

Dahlia Herzog is a rising senior at Brandeis University studying Near Eastern and Judaic Studies. She is interning at Hazon this summer.