Hooked on Meat: a Nice Jewish Girl’s Film on Bacon 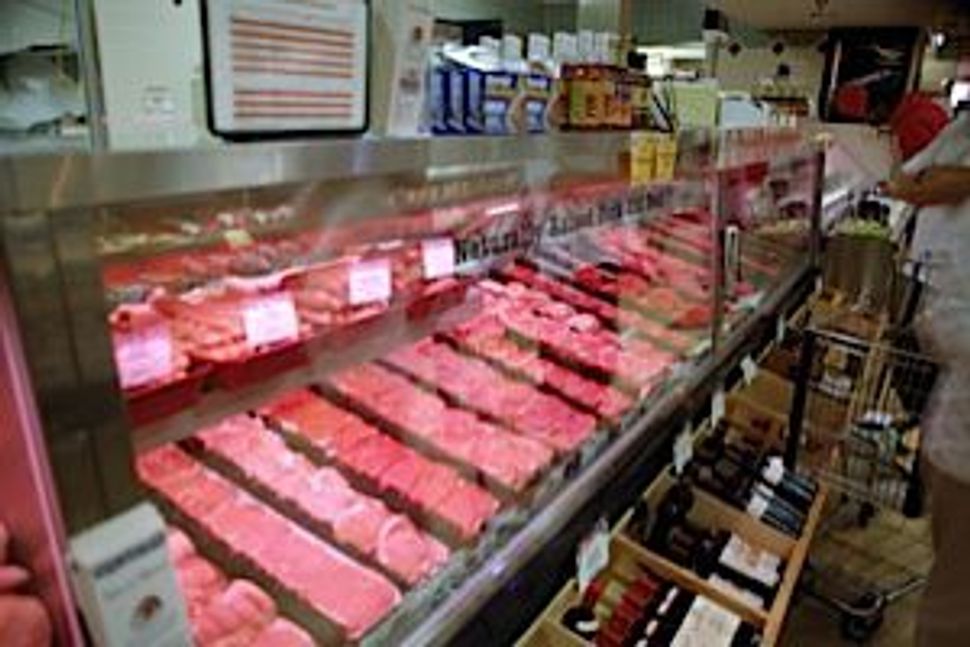 “Why is a nice Jewish girl like me making a film about pigs and bacon?” Suzanne Wasserman the writer and director of the new documentary “Meat Hooked!” in the beginning of her movie.

The question is a good one but not one that’s easily answered. Wasserman, who comes from a meat loving family, set out to explore the “rise and fall and rise again of butchers and butchering.” In her absorbing and graphic documentary (which will air on July 7 on PBS) she introduces us to butchers and meatpackers, chefs and farmers who are part of the current meat craze of artisan butchers and meat CSA’s.

Watching “Meat Hooked!” employs all of your senses, for better or worse. Though I had to look away at certain parts of the film (a pig slaughter was hard to stomach), Wasserman skillfully weaves historical and personal narratives throughout to grant her viewers frequent reprieves. The history of butcher shops in New York City is fascinating, and the film takes it back almost 200 years. As Wasserman explains, it was only in the mid-19th century that the New York City Council legalized meat sales and butcher shops, partly as a response to an expanding middle-class that demanded a more accessible and regular supply of meat. That expanding middle-class came in part from the influx of immigrants – Irish and Germans, Jews and Italians – who were arriving in waves over the course of the mid-to-late 1800’s, many of them planting themselves in the heart of the Lower East Side. These butcher shops sold beef, chicken and of course pork.

Which brings us back to Wasserman’s opening question: What, if any, is the connection between Jews and pigs, especially for those who don’t even keep kosher? Writer and essayist David Rakoff, who passed away as the film was being made (it is dedicated to his memory), offers some suggestions. “I didn’t grow up kosher,” he explains in an interview in the film, “but I’m culturally Jewish. It occurred to me some time ago that when I ate pork I was extremely conscious of the fact that I was eating pork.” Rakoff’s suggestion, that a certain kind of awareness about eating pork has become an intangible but central element of contemporary Jewish identity, rang true, at least for me. His words recalled a memorable scene from The “Promised Land,” that prototypical immigrant memoir, when Mary Antin is having tea with her teacher and is suddenly handed a “strange” meat. Much to her dismay, she finds that she is squirming, fighting her inner self to eat it. So, in response, as she writes, “I began to reduce my ham to indivisible atoms, determined to eat more of it than anybody at the table.”

Meat Hooked! portrays the often complicated ethical dilemmas that eating meat brings up — or should bring up — for all of us kosher-keeping or not. At the heart of the film, Wasserman presents a quote from Michael Pollen: “Imagine if the walls of every slaughterhouse and animal factory were … made of glass. So much of what happens behind those walls — the cruelty, the carelessness, the filth — would have to stop.”

In interviewing some of the individuals who make up the recent resurgence of butchering culture, this film attempts to introduce us to transparency as an ethical act, a way of making visible what is otherwise a veiled, secret, and often horrifying process. As we meet various master butchers — one a former vegan — we come to see this bourgeoning engagement with meat as more than a way of making money, or a hobby, or a fleeting trend. Instead, for some, interacting with meat is closer to an art form, a means of connecting, a way of life.

Hooked on Meat: a Nice Jewish Girl’s Film on Bacon