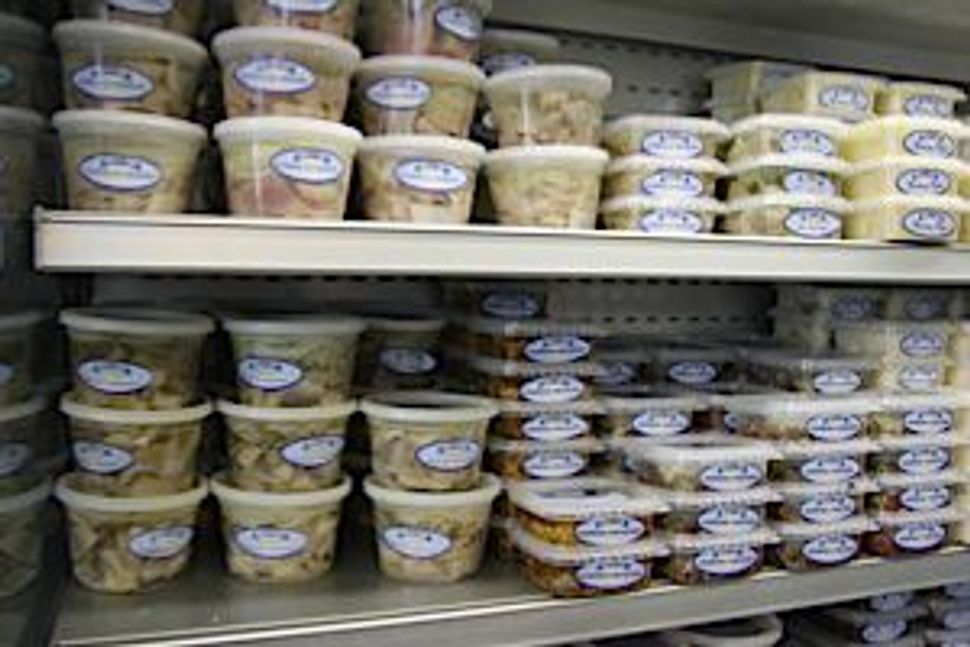 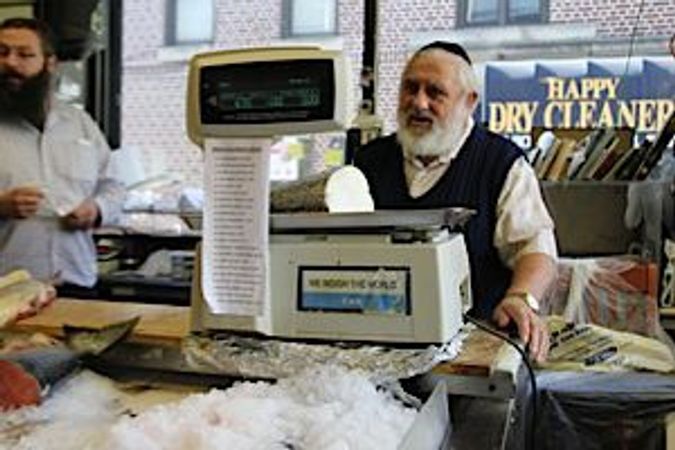 Schlomo Raskin stands behind the counter at his fish shop which has been serving Brooklyn for more than 50 years. Image by Lauren Rothman

Raskin’s Fish Market is a store from another era — it’s the kind of store your bubbe probably shopped at. Located in the heavily Jewish neighborhood of Crown Heights, Brooklyn, Raskin’s has been dolling out fresh fish for more than five decades.

Walking down Kingston Avenue, Raskin’s faded pink-and-blue letters that hang from the limestone building’s façade, advertising free delivery and listing the phone number with both numbers and letters stand out, recalling a past when neighborhoods were smaller and more tight-knit.

Stepping inside the small, narrow storefront, you’ll see piles of salmon, snapper and dorade heaped on top of mounds of snowy crushed ice. Behind the counter a friendly, elderly man still wields his fish knife with startling precision, scooping the skin off a salmon filet in seconds. That’s Schlomo Raskin, the store’s founder, who opened his eponymous fish shop at this location in 1961 after immigrating from Leningrad, Russia. 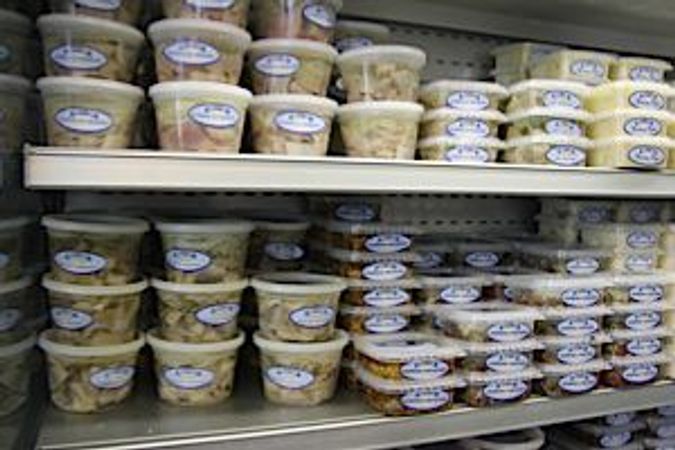 Schlomo is a quiet, soft-spoken man who won’t reveal his exact age (it’s in the high 70s, he says) and leaves the majority of the tale-telling to his son Berel, the current face of Raskin’s.

“Independent shops that specialize in one particular product have gotten less popular,” Berel explained on a recent weekday afternoon. “People today want one-stop shopping. But back in the 1950s and ‘60s in Crown Heights, you had your butcher, your bakery, and the fish store.”

Berel said his dad had an entrepreneurial spirit and knew he wanted to open a business in this country after him immigrated. Schlomo chose fish, Berel said, because it’s much easier to get kosher certified. “Getting certified is a big to-do,” he explained. “But when fish has scales, it’s automatically kosher-certified.”

“Nowadays, most people buy their fish from the fish counter in a supermarket,” Berel continued. “Here at Raskin’s we have to be extra superior and try to specialize as much as we can, to keep the customers coming in.”

The quality brightly colored fresh fish is clear when you walk into the shop but that’s not the only reason regulars return. Raskin’s is known in the neighborhood and even abroad for its gefilte fish, varieties of herring and canned tuna.

“The gefilte fish is our flagship product,” explained Berel. “This is frozen, raw gefilte fish that you cook at home. It’s sold in all the major cities in the country, as well as in France, Antwerp, London, and all over the world.”

The gefilte fish is available in several varieties, but that’s nothing compared to the store’s selection of herring, which comes in 20 varieties and is available smoked, pickled, and creamed, in different flavors ranging from the traditional (schmaltz, or lightly salted) to the new (herring with pistachios, a surprisingly delicious combination).

Berel explained that the popularity of this medium-sized, oily-fleshed fish has less to do with religion and more to do with eating cheaply and sustainably. “Herring is more ethnic than it is Jewish,” Berel said. “It’s cheap and plentiful, and for Jews, it’s kosher.”

He chuckled as he broke open packages of herring for me to taste. “I could talk about herring all day — and I have.”