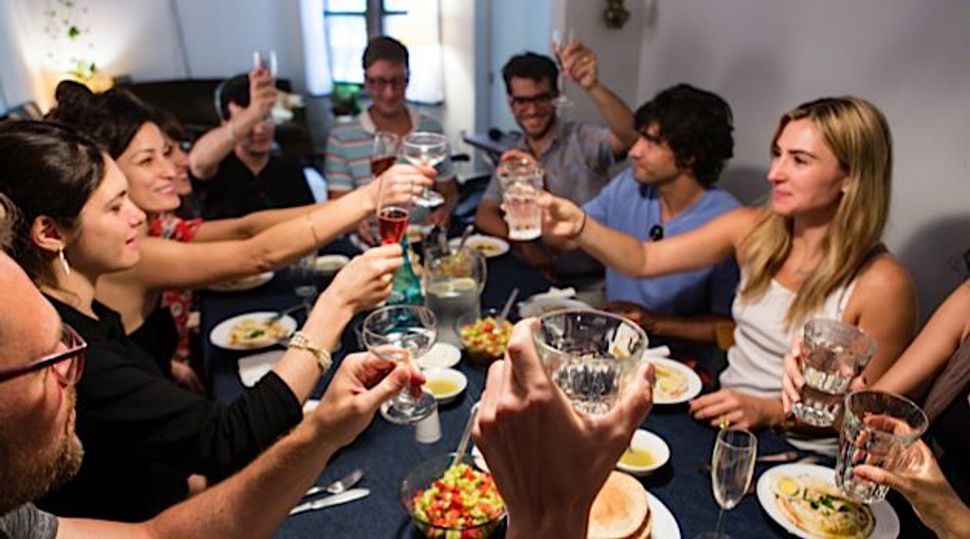 L?Chaim! Diners sip cocktails and dig into rich creamy bowls of hummus and crunch salads at a pop-up hosted by EatWith. Image by Elion Paz

In the late 1800s a saloon owner named Kate Hester purportedly defied Pittsburgh’s new licensing laws by running a secret establishment where locals in the know could drink and enjoy the company of friends and strangers. When the evening’s festivities got too loud — as the story goes — Hester would hush the crowd by saying “Speak easy, boys.” And from Hester’s saying, the term “speakeasy” was coined.

In early August, I received an email from the phantom of Kate Hester, inviting me to a dinner deep in Brooklyn. Intrigued, one Tuesday evening I followed the directions to a large purple Victorian home on a tree-lined street.

Walking into the house I was greeted by a bearded man wearing a yarmulke; he handed me a martini glass filled with watermelon-rosemary granita and vodka. As I moved past the foyer, I saw that the living room and dining room furniture had been pushed aside and the space filled with intimate tables, each dotted with a small vase of flowers.

During the evening, glasses of wine flowed and plates of elegant but simple seasonal fare, like roasted whole porgy with herbs and lemon, and patty pan squash stuffed with feta and figs, were served, while a jazz trio visiting from Argentina jammed in a corner.

The dinner, part of a kosher supper club called The Hester, was one of several Jewish meals I have attended recently in unexpected and often unmarked locations that were set up to host guests one night and were empty the next.

As at Hester’s Pittsburgh establishment, these meals often take place outside restaurants and skirt New York City’s alcohol, health and zoning laws. But for diners the experience is worth the risk.

These pop-ups, most of which launched within the past year, are serving some of the most exciting Jewish food in the country: authentic Iraqi soups, a Persian Shabbat feast and hummus as fresh and creamy as the heaping bowls sold at the famous Abu Hassan hummus shop in Jaffa. For their hosts, these projects are a way to explore and connect to their Jewish identity and love of food and community — often outside of their day jobs.

When Danya Cheskis-Gold quit her job at a startup in April, she started to look for ways to connect with others outside of a bustling office. “One of the first things that came to me was Pop-Up Shabbat,” she said. Growing up in a Conservadox home, Cheskis-Gold says, her family had an open-door policy for Shabbat meals, where friends and neighbors were always welcome.

Having stepped back from observance for several years in her 20s, she wanted to find a way to rediscover her roots.

“The things I connect to most in the Jewish community are food and friends,” she explained. For the past few years she has periodically hosted Shabbat dinners for up to 40 friends in her Brooklyn apartment, but she wanted to experiment with something larger that was accessible to others Jews like her, who are passionate about Shabbat, and to non-Jews who are curious about the rituals that go along with it. 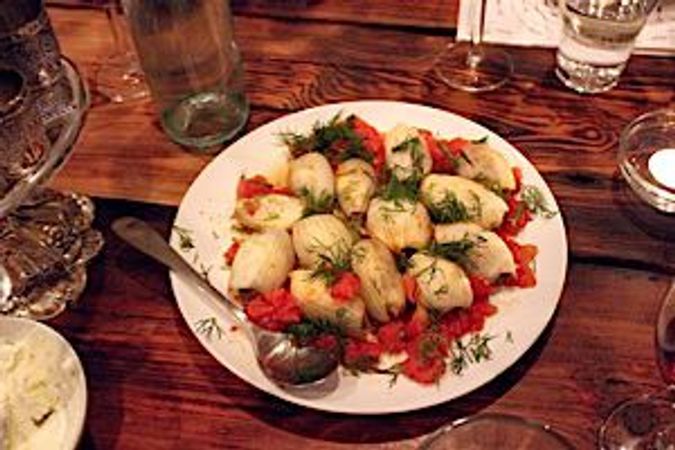 Taste of Persia: ShaBubbe, the first Pop-Up Shabbat, featured roasted Cornish hen with dried limes and a side dish of meat, lentil and herb stuffed onions. Image by Devra Ferst

On a balmy Friday evening in mid-July, she hosted her first pop-up, dubbed ShaBubbe, on the second floor of an old home near Brooklyn’s Gowanus Canal that has been converted into an office.

The sunlit room, with a kitchen at one end and long wooden tables stylishly set, could have easily been mistaken as the site of a trendy invite-only Brooklyn dinner without any Jewish connection. But touches like freshly baked rosemary garlic challah rolls and bowls of ruby-colored borscht prepared by The Gefilteria provided culinary touchstones for guests with Ashkenazi roots.

Sandwiched between the soup course and a dessert of macaroons were several classic Persian dishes: Cornish hen roasted with dried limes and yellow squash; crispy Persian rice bespeckled with coriander seeds; beef and lentil-stuffed onions with mint and tarragon. The aroma of the dishes was intoxicating and unmistakable as I walked into the room. “[Melanie Shurka] cooks this food because of her Persian identity,” Cheskis-Gold explained of the evening’s guest chef. “It’s so different than the food from my Jewish grandmother in Queens, but this is how we think of our identity.”

While tradition is important to Cheskis-Gold and to all the hosts, Jewish food in the pop-up era is about innovation and reinterpreting tradition. At her next Shabbat dinner, slated for October, she plans to focus on soul food.

“In my dream world it will be outdoors in a backyard, and I already locked down a DJ who’s worked with Beyonce. He’s half Caribbean and African American. I would love to have a Jewish deli partner and serve okra kugel.”

Later in the fall, Jeffrey Yoskowitz, a co-founder of The Gefilteria, will reimagine the site of his childhood family celebrations, the famed dairy restaurant Ratner’s with a two-week pop-up on Manhattan’s Lower East Side. “We’re paying tribute to what Ratner’s represented and things that were only…found there,” Yoskowitz said.

There has “been a renaissance of delis… but dairy restaurants haven’t had their due,” he explained. While the details of the pop-up are still being worked out, Yoskowitz and his business partner, Liz Alpern, have tested a number of cheese blintz recipes and are considering developing a recipe for the restaurant’s famous onion rolls.

For Israeli-born New Yorker Naama Shefi, pop-ups have become a way to connect to a faraway homeland. She is the New York marketing director for the Israeli food startup EatWith; a company often considered to be the Airbnb of food, it allows locals and visitors to a city to purchase tickets to special dining events hosted at homes in the area.

During the company’s New York launch weekend, Shefi hosted a traditional Israeli brunch in her sun-drenched apartment, serving hummus masabacha from Brooklyn Hummus, a one-man operation based in Brooklyn that churns out hummus as rich and creamy as the bowls from Israel’s best hummusiahs.

When Shefi first tried it, she said, the taste of home nearly made her cry. She rounded out the meal with slow-cooked eggs and a collection of Israeli salads, pickles and fresh fluffy pita, creating an event that had the feeling of brunch in Tel Aviv.

EatWith is Shefi’s second foray into the world of pop-ups. In March she hosted a three-week-long restaurant specializing in the classic Iraqi Jewish soup kubbeh, which featured meatballs wrapped in bulgur, served in a choice of beet or lemon broth or pumpkin puree.

“New York is a city where you can find anything — but kubbeh is the one thing I couldn’t find,” she said.

It was a personal yearning that helped inspire Shefi to create The Kubbeh Project. While Shefi’s family is of Ashkenazi, not Iraqi, descent, kubbeh is a classic dish of Israel’s markets. “If our generation isn’t active in preserving these flavors — they will disappear…. It was a really honest attempt to discuss… [and] broaden the conversation about Jewish culture,” she said.

While Shefi’s newest project won’t focus exclusively on Israeli or Jewish food, EatWith has already hosted several Israeli meals and two challah-baking workshops. This fall, in a project separate from EatWith, Shefi will partner with Lebanese chef Sara Jenkins at the Manhattan restaurant Porsena to create a series of pop-up Middle Eastern dinners. 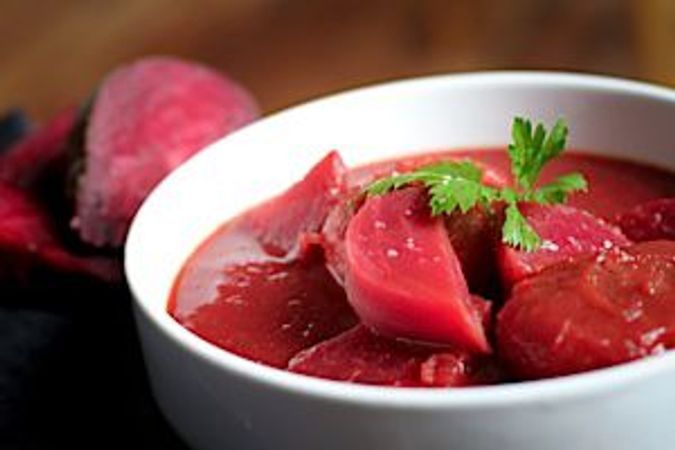 Not Another Borscht: The Kubbeh Project presented New York diners with authentic interpretations of the Iraqi soup kubbeh. Image by Katherine Needles

Perhaps the most exciting element of these pop-ups — other than the extraordinary food — is the diversity of diners. At each meal, guests arrived either as small groups of friends, as couples or alone. These meals, like the pop-up Shabbat, which was served at three long tables, and The Kubbeh Project, where all 15 diners crowded around one long table in a tiny converted coffee shop, are largely served in a communal setting.

The setup generates dialogue among the guests — a rarity in the New York dining scene — about the food, and personal culinary recollections of Shabbat dinners and hummus lunches in Israel.

These meals don’t come without their challenges. Most restaurants stay in business by expertly preparing dishes identical to ones they served the last time a diner tasted them. With pop-ups, that pressure doesn’t exist, but another arises in its place: A dining experience that exists only temporarily must find the right balance of food, theme and atmosphere with no chance for a practice run.

But, when these events succeed, there is a sense that the experience is unique. The location, menu, music and company will never be re-created, making the meal memorable, long after the host packs up shop and moves on.

Devra Ferst is the food editor of the Forward. Contact her at ferst@forward.com or on Twitter, @devraferst.