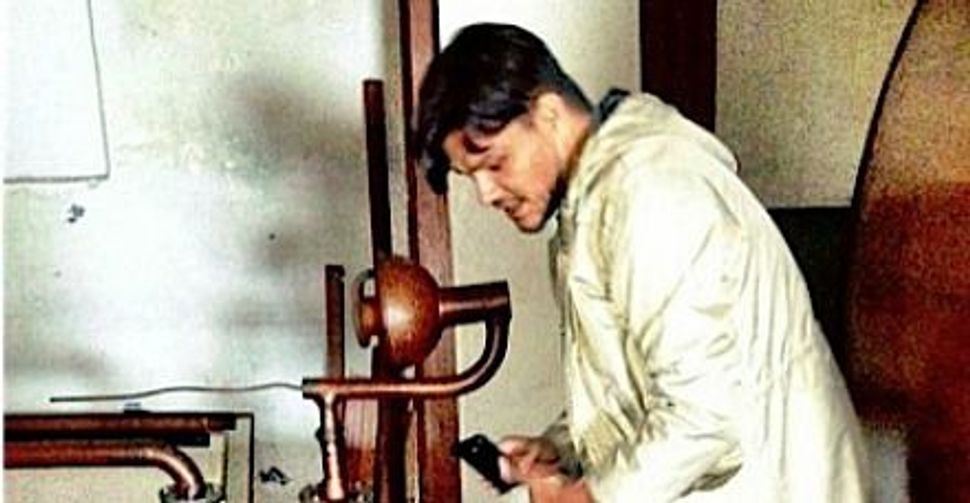 Image by courtesy of milk and honey distillery 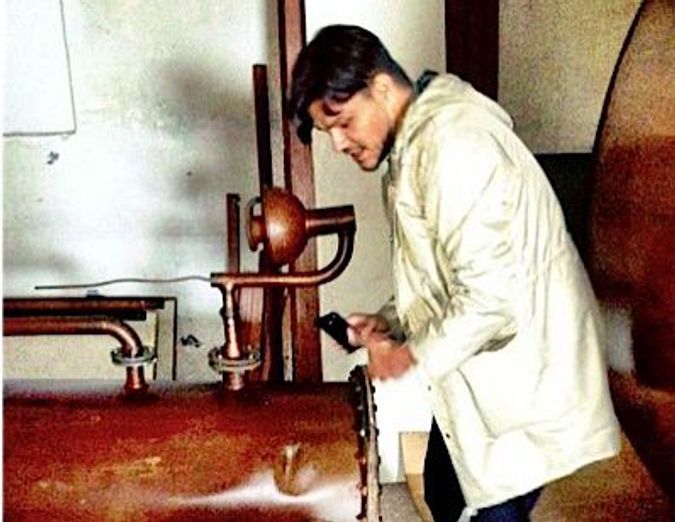 Still Searching: Simon Fried on his travels, looking for the perfect pot still. Image by courtesy of milk and honey distillery

October has come, and the warmth of the summer has fled those parts of these United States that only carry it seasonally. While Florida and California continue to sip their sparkling white wines, other regions are looking forward to that most enticing of prophylactic belly-glows: whisky.

While San Francisco mulls its recent Simchat Torah WhiskyFest and the New York area looks forward to the mid October Whisky Jewbilees, some Israelis are taking the long view.

For those few chilly areas of the Holy Land, or perhaps in case the Middle East suffers a spot of global cooling, Simon Fried and his partners at the Milk and Honey Distillery are making whisky.

Dan Friedman: There are three things you need to make whisky: water, barley and time. Israel doesn’t obviously have any of those, so why do you want to set up a distillery in Israel?

Simon Fried: We want to set up a whisky distillery in Israel for several reasons. On a personal level, as individuals, the distillery’s founders are all whisky buffs. Some have craft and home-brewing experience from Israel. I have worked as a business consultant to Macallan. We want to and believe we can make a good whisky. Secondly, there is a growing movement of world whiskies. As we see it each whisky serves as an ambassador for its country of origin. We wanted to create such an ambassador. We want to make a kosher whisky that Jewish people and friends of Israel can be proud of.

Water is indeed a challenge in Israel. Not so much because of water needed when making the whisky wash or when diluting the cask strength whisky for bottling. That water is plentiful enough and our water will be carefully filtered and passed through reverse osmosis. As a result it will not only have just the right characteristics for making whisky but will also put a little of the Sea of Galilee and the River Jordan into every sip.The real water challenge is actually a technological one. How to cool/condense the vapors from the copper still? Our stills require 2500 liters [660 gallons] of 15C [59F] water every hour. In Israel the water is too expensive and too hot to do this from the tap. We will use a closed loop water chilling and recycling system for this purpose. So in the end the main impact of water shortage in Israel is innovation and environmentally friendly solutions.

Barley is grown in Israel but not in large enough quantities. We plan to use Israeli ingredients when possible but at most only a little of the barley will be local. This goes for Scottish, European, Japanese and US distilleries as well. Barley is a commodity and most buy the highest quality they can from international suppliers. Some smaller producers source locally if they are lucky enough to be in a grain growing region but it is rare and not necessarily a recipe for better whisky.

Time is a strange thing in Israel. Some things are very ancient and inspire patience. Others are fairly recent inventions, such as supermarket queues. These tend to inspire something that has little to do with patience. It is right to say that Israel is an impatient place but when it comes to traditional things there is a different gear available. Wines, olive oils, cheeses and many other foodstuffs are allowed to travel in the slow lane.

The real advantage for us though is that whisky does age more quickly in warm climates. The exchange between the distillate and the wooden barrel is more intense in a warmer place where temperature differences can vary a lot every day. You can expect an Israeli four year old to be more like a Scottish ten year old.  If you have had the good fortune to try Kavalan from Taiwan, or Amruth from India you will have experienced this effect before. Our Master Distiller Dr. James Swan is a prize-winning expert on aging whisky in warm climates so we expect to do it properly and not just quickly. So, while we believe it is an ambitious goal we also think it can be done and be done well. Lack of water is leading to creative engineering solutions, barley is much the same as anywhere else and the aging is likely to be an advantage for the impatient.

So I saw you’ve been visiting other distilleries for ideas and help. Where are you setting up your Israeli distillery and what’s the time frame?

We have been doing a fair bit of traveling. So far we have been to distilleries in the USA, Ireland, Scotland, Germany, Austria and Sweden.

We are about to decide on a location in Israel but cannot announce yet as there are still negotiations taking place. As soon as we can confirm I’ll let you know. We expect to start production before year end as a few months will be required for building preparations.

Jim Swan our Master Distiller is convinced that the climate will give well aged whisky within two years but we shall have to wait and see (not to mention that three years is the legal minimum).

There are many obstacles still facing Fried and his co-conspirators (Nir Gilat, Naama Agmon, Amit Dror, Roee Licht and Gal Kalkshtein who put up about a quarter of a million dollars for the project) but, given the number of Jews who will pay for expensive whisky and the number of devout Christians who will pay a premium for Holy Land products, it might just be a viable operation. The next two or three years will tell. So, to paraphrase Herzl, “Im tirtzu, ein zo agada” — “if you will it, Israeli whisky is no dream.”