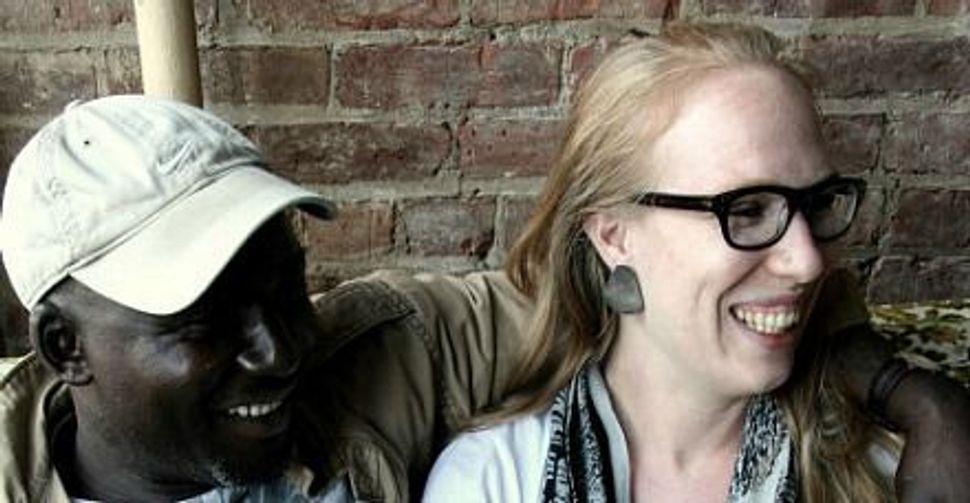 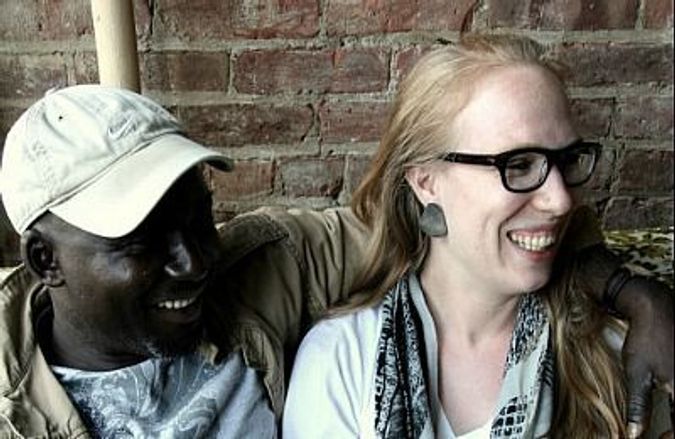 Nat Goldberg with her partner, Lookman Mashood, at Buka, their Brooklyn restaurant.

Getting Nat Goldberg to stop for a minute is no small feat.

The Nigerian restaurant Buka, which she co-owns with partner and chef Lookman Mashood, is hopping. Their spice-selling store just opened and African Restaurant Week is going strong through Oct. 20th with three-course, $28.95-prix-fixes and a Friday night hip-hop DJ party.

Far from Goldberg’s Australian home, Jewish upbringing and architecture career, the couple’s business has created a buzz, having turned a narrow, brick-lined law office in a a newly hip corner of the Clinton Hill neighborhood into a happening, art and music-filled eatery.

“She designed it and I built it,” Mashood, a professional carpenter, says with pride, before popping back into the open-galley kitchen to oversee cooks and put together a catering order.

Goldberg believes their ethnic eatery featuring recipes from Mashood’s family and the country’s myriad ethnic groups, filled a void. Unless you really knew where to go, where to find New York’s innocuous, hole-in-wall places, you couldn’t eat Nigerian food in the city, she said. The meaning of Buka is small, side-of-the-road restaurant, maybe lacking in appearance but totally delivering in quality.

And the city’s Nigerian community has embraced them, according to Goldberg, who believes 70% of their customers are from Nigeria.

New Yorkers with a sense of adventure gravitate to Buka for cow feet or goat head cooked in Igbo spices. Goldberg is not kidding when she says the food is hot. No fusion here. Nor do they “tone down foods to suit the American palate.”

There are dimensions to the dishes that defy the norm. Oha soup is a hearty melange of beef, smoked fish and oha leaves. More fish, this time dried, appears in egusi with ground melon seeds steamed with spinach. Since there’s no such thing as appetizers in Nigerian cuisine, the section of the menu marked as that, actually offers street foods like yam fries, honey bean cake (moi moi), meat pies and grilled tiger shrimp.

During high school summer vacations, Goldberg visited her father who was living in Nigeria and grew to know and respect West African traditions (eating with the right hand) and cooking.

While not kosher (many Nigerians are Muslim), Buka’s halal food has similarities: no pork, no dairy. And the little oil that’s used in the kitchen is palm oil.

If diners are impressed, and it’s hard not to be by the unusual, assertive flavors, and want to replicate Buka’s dishes, the new market will supply exotic spices, stocks, leaves, recipes and beauty products.

Goldberg, whose father’s family is from Israel and mother’s from Hungary, sometimes yearns for Eastern European foods. Since she lives in Williamsburg, she has only to go to Greenpoint for Polish delicacies that satisfy those cravings. Fortunately there are Jewish relatives here to spend holidays with, since she travels to Australia only every few years.

Goldberg, 38, came to Brooklyn from Melbourne, via London where she worked as an architect. In New York she was employed by Robert Stern for five years.

The couple met in Fort Greene five years ago and soon were planning a project that may have loomed in Mashood’s dreams, but for Greenberg was an unexpected turn in the road. Yet their vision was spot on. Not only was there a lack of Nigerian restaurants with the level of service and professionalism they wanted to create, but she says Clinton Hill was a gentrifying neighborhood and Fulton Street already boasted several African businesses.

Now Brooklyn’s Bedford-Stuyvesant is attracting African merchants and customers so 1318 Fulton St. seemed like the right address for their new Buka Market.

Of course as authentic as the cuisine is at Buka, not everything can be done exactly as in Nigeria. Like fufu, the pliable round of white yams that one tears off to push and spoon stews and soups (not that one can’t get utensils here). In Africa, yams are pounded with a big mortar and pestle to make fufu, explains Goldberg. “We can’t do that here. If we did, the floor would cave in.”