In the Kitchen With Brooklyn’s Kosher Revolutionary 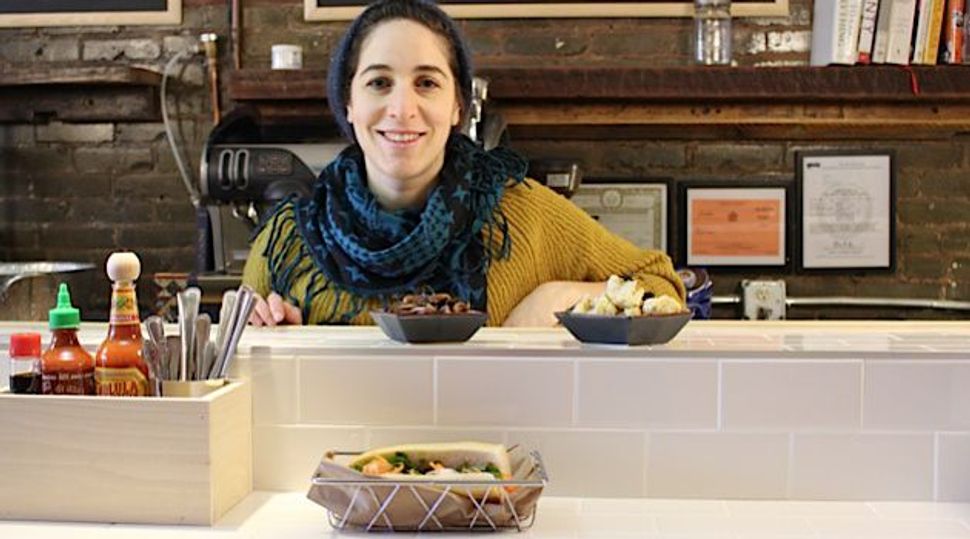 Out of the Box: Each of Itta Werdiger Roth?s projects breaks the norm of kosher food. Her cooking is talented self-taught chef and her personal touches like a spray-painted mural at her new restaurant Mason & Mug are creative and unexpected. Image by Devra Ferst

On a crisp morning earlier this fall, I met chef Itta Werdiger Roth outside a small storefront in the Prospect Heights neighborhood of Brooklyn. The windows were still covered with newspaper, but inside was the beginning of Mason & Mug, a new artisanal kosher restaurant she is set to open on November 25 with her business partner, Sasha Chack. Werdiger Roth led me inside for a look at the newly installed wooden bar, which is topped with smooth white subway tiles and illuminated by three oversized Chinese lanterns. The wall across from the bar is decorated with a bright, graffiti-inspired mural. The menu concept — small bites of global street food — will feature dishes like Vietnamese bánh mì, fish tacos, spicy turmeric and ginger chickpeas, and homemade pickles. Neither the space nor the menu seemed anything like most kosher restaurants. But then again, Werdiger Roth is hardly like other kosher chefs.

If you have never heard of Werdiger Roth, that is at least in part by design. In late 2011 she launched The Hester, a popular speakeasy-style kosher supper club that she ran out of her home in Brooklyn. In keeping with the hush-hush vibe of a speakeasy, she kept her own identity semi-shrouded, sending communiqués to guests under a fictional name, Kate Hester. Now she is ready to step out of Kate’s shadow.

As is the case for many food professionals, Werdiger Roth’s path to becoming a chef and restaurateur was far from straight. She grew up in Melbourne, Australia, in a Hasidic family. Her father’s family traces its lineage back to the beginning of the Lubavitch movement in the late 18th century. 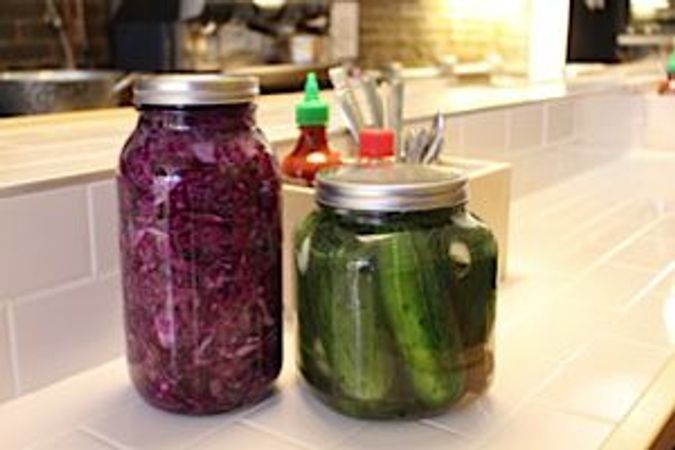 Like her father, whom Werdiger Roth describes as quirky and creative (“the kind of guy who will wear a purple suit to shul and not care what anyone thinks”), she gracefully defies any conventional stereotypes of religiosity. Her dark-brown shaytl, the wig traditionally worn by married Orthodox women, is cut in a wavy bob with stylishly cropped bangs. She favors vintage clothes and red lipstick, and has a warm, easy wit and a fiery sense of humor.

Werdiger Roth’s passion for food came in earnest when she was a teenager reading a novel set in India that described vegetable curry. “I really wanted to try something that had never been cooked in my mom’s kitchen,” she said. So she set about finding the unfamiliar ingredients — curry, cumin, coriander and coconut milk — and concocting a dish that was new to her. That first bite was revelatory: It was new and it was hers. “My nose was running, it was so hot. And I loved it,” she said.

This thirst for new food adventures would follow her into adulthood. As a newlywed (she is married to the author and poet Matthue Roth), a recent college graduate and a brand-new resident of New York City, she took a job as a personal chef for a family in the Bronx. The mother of the family was an avid cook herself, who lent Werdiger Roth cookbooks and got her hooked on organic food. 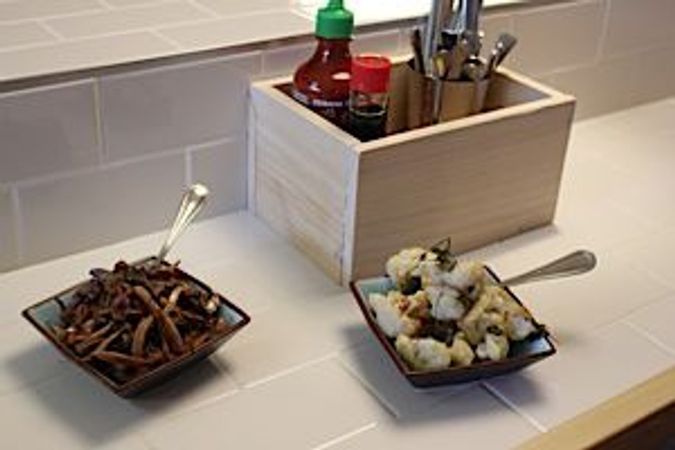 During that time, Werdiger Roth gave birth to her two daughters, Yalta, now 5, and Freda Belle, now 3. She also took on new clients and spent a year working as a server and line cook at Pardes, an artisanal kosher bistro in Brooklyn. “I learned so much about menu creation and professional food presentation from him,” she said of Pardes’s chef, Moshe Wendel. “He had all of these gorgeous French purees he would keep in squeeze bottles, but could also turn out an amazingly rustic staff meal. I remember thinking, ‘This guy is bloody good.’” Overtime, she began to fantasize about branching out on her own. “I was like a balloon that had collected all of these creative ideas and just needed to be popped,” she said. “That was The Hester.”

Over the course of 21 events — sit-down dinners and cocktail parties, always featuring live music — The Hester built up a dedicated following of Jewish and non-Jewish diners, and garnered high-profile press. About half of the attendees were kosher keepers who reveled in the fact that the meals offered access to unusual flavors and high-quality ingredients that are hard to find in the kosher world.

Werdiger Roth crafted her menus while browsing the produce section of Brooklyn’s Park Slope Food Coop. “Sometimes I would snap a bunch of photos of the seasonal fruits and vegetables on my phone, then go home and mix and match them into dishes,” she said. One summer spread included a watermelon rosemary granita cocktail, lentils topped with heirloom eggplant and a soft-boiled egg, and a whole lemon-and thyme-stuffed fish served along with patty pan squash filled with sheep’s milk feta, capers and figs. Dessert that night was a scoop of basil ice cream served with macerated plums and crumbled halvah. These unusual flavor pairings work because, despite having no formal culinary training, Werdiger Roth is a “bloody good” chef herself. And dedicated, too. The week I attended, the menu featured a plate of Israeli-made cheeses that are not sold in the United States; she had toted them back in her luggage.

Over time, The Hester grew from a wild experiment — she was inviting total strangers into her home, after all — into a glimpse of what kosher restaurant food could and should look and taste like. Meanwhile, Werdiger Roth began to crave a better sense of boundaries between work and home. “We would literally move every piece of furniture in the living room to set up for The Hester,” she said. It was time to advance to the next level.

Then Chack, a fellow Brooklynite, floated his idea for a brick-and-mortar kosher small plates restaurant. Chack had been the food and beverage director of the 92nd Street Y’s Tribeca location until it closed this past summer. He got turned on to Werdiger Roth’s innovative cooking style while attending an event at The Hester. Chack told Werdiger Roth that he envisioned an intimate restaurant that sold globally inspired street food along with craft beer, wine and cocktails. Like a handful of other kosher restaurants that have emerged in the past few years (Pardes, for one), he wanted it to be explicitly kosher while appealing to the neighborhood’s broader community. He had experience in the world of hospitality, and he thought Werdiger Roth might be the perfect person to head up the kitchen. She agreed.

After raising nearly $25,000 of crowd-sourced funding through the website Indiegogo, and spending countless late nights working, Mason & Mug is prepared to open. Transforming the space from its previous incarnation as a non-kosher eatery was a sizable effort. As Chack put it, “There are so many aspects of opening a restaurant you would never think about.”

One of those, was finding the right person to certify the restaurant’s kosher status. As kosher-keeping Jews who want Mason & Mug to be accessible to friends and family, Werdiger Roth and Chack knew that certification is paramount. But they also knew that many organizations mandate more than the food, prohibiting restaurants from making certain decor decisions or from playing secular music. After several false starts, they found Rabbi Avrohom Marmorstein, who is both well respected by the Orthodox community, and was willing to accommodate their artistic vision.

Meanwhile, things continue to move along at warp speed. Chack’s wife gave birth to their first child in October. And Werdiger Roth is pregnant with her third. Under such circumstances, some people might throw in the towel, but Werdiger Roth is determined to bring her dreams — as a mom, a chef and a pioneer of artisanal kosher cooking — to fruition. “Being a working mother is the hardest thing in the world,” she said. “But if you want to do it, you just have to dive in.”

Leah Koenig, the Forward’s monthly food columnist, is a writer and cookbook author. Her new book, “Modern Jewish Cooking,” will be published in 2015. Contact her at [email protected]

In the Kitchen With Brooklyn’s Kosher Revolutionary