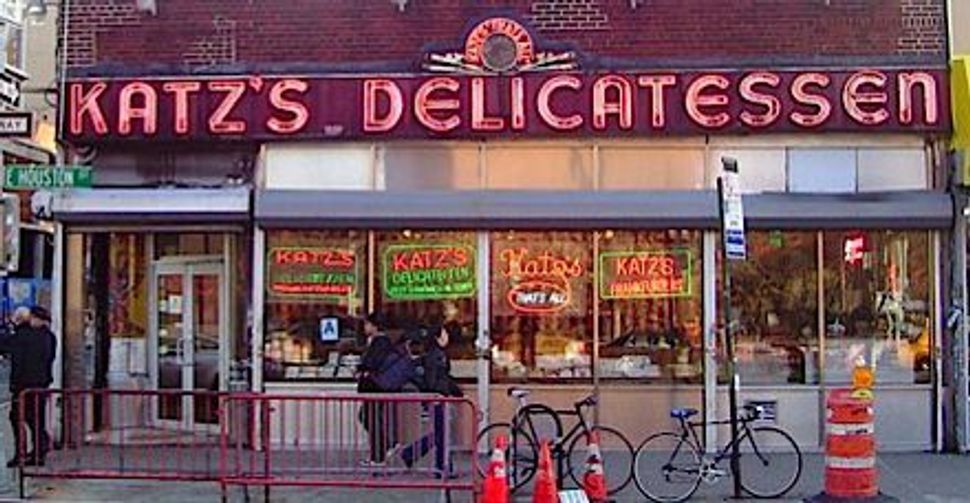 There are a handful of New York City landmarks that most people recognize: Lady Liberty. The Chrysler Building. And Katz’s Delicatessen.

Opened on the Lower East Side in 1888 and purchased by the Russian Katz family in 1903, the delicatessen famous for its orgasmic pastrami sandwiches, its Friday evening frankfurters ‘n’ beans and its Cel-Ray soda is one of the oldest continually operating businesses in New York City. And, at the ripe age of 125, Katz’s is still going strong: each week, the deli serves up more than 10,000 pounds of pastrami, 6,000 pounds of corned beef, and 4,000 hot dogs to locals and tourists alike. That’s a lot of cow.

Katz’s has attracted its fair share of attention over the years. But no one had ever written a book about it until now. In September, current part owner Jake Dell wrote the introduction to Katz’s: Autobiography of a Delicatessen in which he traces the famed storefront’s evolution from a tight-knit neighborhood joint to a star-studded celebrity hangout at the height of the early 1900s Yiddish theatre boom to a can’t-miss tourist attraction in the oughts. Large-format, full-color photos by Baldomero Fernandez detailing every nook and cranny of the restaurant accompany Dell’s text.

When it comes to publishing food or cookbooks, it’s usually the restaurant chef or owner that approaches the publisher with an idea. But in the case of Katz’s, Dell said, it was Bauer and Dean Publishers that, a few years ago, came to him. With the big anniversary fast approaching, Dell thought the timing was perfect.

Originally, the idea was for a coffee table-type book—no text, just high-quality photos by Fernandez, a fashion and portrait photographer. But Dell realized that a book would provide the perfect occasion to get the Katz’s story down on paper. He sat down to write a short introduction to the book but quickly found he had more to say than he had thought. 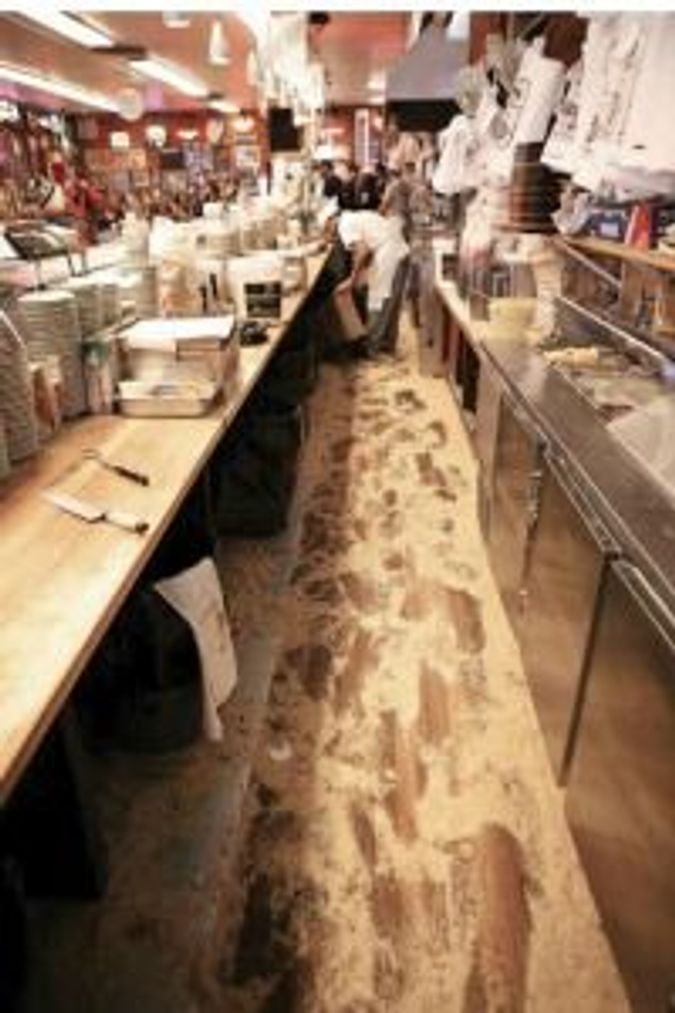 Image by Bauer and Dean Publishers

The book’s opening text evokes the world of the Lower East Side that Katz’s belonged to when it was first established: a dense, pulsating hub of Jewish life populated by the many Eastern European immigrants who arrived in New York in record numbers at the turn of the century, having fled the oppression, violence and dismal economic opportunities that they increasingly faced at home. By 1924, close to two million Eastern European Jews had immigrated to America’s shores, and their capital was the Lower East Side.

One of the most defining characteristics of an ethnic enclave is its food. These new immigrants set up shops and delicatessens where they could both purchase and sell the foods they were used to eating in their home countries: cured meats and fish; pickled vegetables; and hearty soups and stews.

“From the late nineteenth century into the early twentieth century, barrels of meat and pickles lined the streets of the Lower East Side,” Dell writes. “Delicatessens were on every corner, each with a slightly different menu and a distinct and loyal set of customers.”

David Sax is a Canadian journalist and the author of Save the Deli: In Search of Perfect Pastrami, Crusty Rye, and the Heart of Jewish Delicatessen. In the book, Sax traces the lineages of many of North America’s most famous delis—including Schwartz’s in Montreal and Yitz’s in Toronto—and argues fervently against their decline. He noted that far from being homogenous, the Lower East Side in that era was a patchwork of local cuisines.

“Each Jewish community had their own specific food,” he said. “Romanians had pastrami; the Poles brought blintzes. Think of it like Chinatown now,” he said of the neighborhood.

Because of changing demographics in New York, however, the character of the Lower East Side began to change as the century progressed. The United States passed restrictive immigration laws throughout the ‘20s, and, after the decimation of the Jewish population in Europe during World War II, immigration to the States slowed to a trickle. As the Lower East Side’s Jewish population was diluted, delicatessens, inevitably, began to shutter.

“All of a sudden that food was nostalgic — and not an everyday sustenance,” Sax said. From numbers in the thousands, Jewish delis on the Lower East Side eventually dwindled to exactly one: Katz’s (Russ & Daughters, the famous old-school appetizing store founded in 1914, is located just down the street).

So what accounts for Katz’s longevity? How is it that such a historical business is not only surviving, but thriving, more than a century after its founding?

One big reason for Katz’s survival is the fact that it was never strictly kosher, but rather kosher-style; this somewhat more relaxed dietary rule helped set the deli apart from its many competitors.

“It was a way to stay open on Saturday when everything else was closed. That’s helped sustain us,” Dell said. 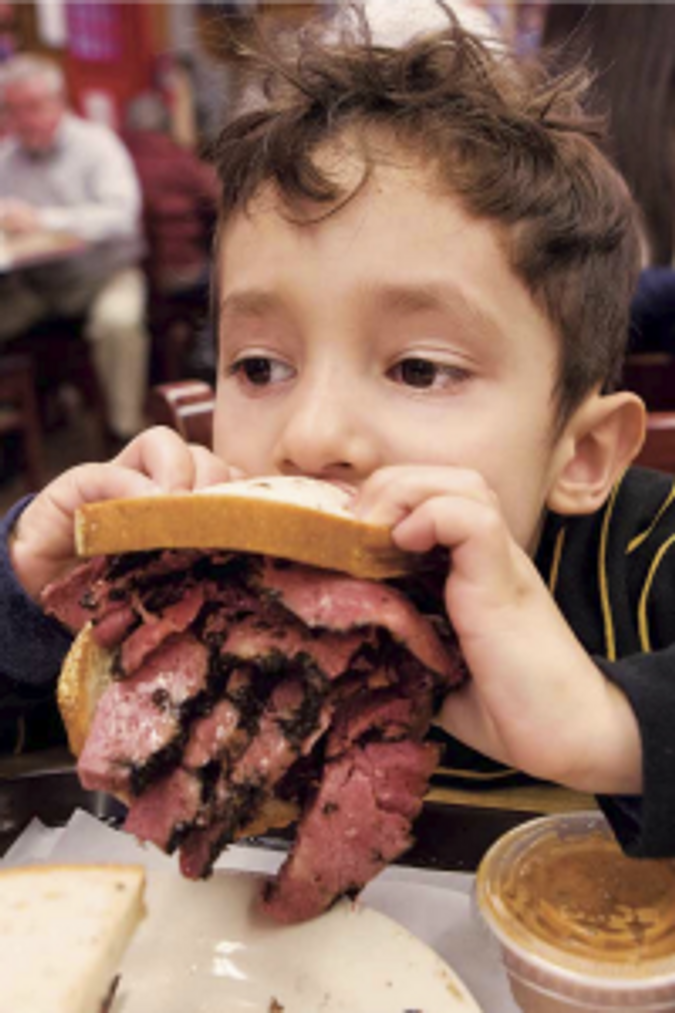 Image by Bauer and Dean Publishers

In more recent years, though, what has really helped Katz’s stay alive is its unique combination of continuing its traditions while also adapting to modernity better than some of its peers were able to. For instance, Katz’s recipes for its cold cuts haven’t changed since the 1900s; but on the other hand, the deli has opened itself up to the public—scenes from “Donnie Brasco” and, of course, “When Harry Met Sally” were filmed at the restaurant, among other movies—as well as embraced the tourism that has resulted from these strategic moves.

“Everyone has a story relating to this place,” Dell said. “They want to feel that they’re a part of it.”

Another way that Katz’s has stayed current? On Friday, Saturday and Sunday it’s open 24 hours: that helps draw in a newer, hipper Lower East Side crowd.

Those hazy early morning hours were some of Baldomero Fernandez’s favorite times to shoot photos for the book.

“It’s just kind of funny to be sober there while people aren’t,” he said. “People come in at 3 or 4 in the morning to eat off their buzz. It’s a wild place to see what happens.”

“Katz’s is like a public space,” Fernandez continued. “People go there and sit and take it all in—a real mixture of people, tourists and locals both. They come there to be a part of New York City.”

Right now is a good time to be Katz’s: in recent years, interest in traditional Jewish ingredients specifically has picked up, with restaurants like Manhattan’s Chinese-inspired Red Farm frying up pastrami-stuffed egg rolls and Daniel Boulud’s DBGB incorporating pastrami into a bone marrow dish.

But perhaps the most influential advancer of the Jewish deli cause is Noah Bernamoff, owner and head chef of Mile End Deli, with locations in Boerum Hill, Brooklyn and NoHo. At the restaurants, Bernamoff smokes his own Montreal-style beef, pickles his own cabbage and cucumbers, and will soon be baking his own bagels. The restaurant was an immediate hit when it opened in early 2010 and has been enormously instrumental in breathing new life into old deli traditions.

Bernamoff said that without Katz’s, there would be no Mile End.

“I first tasted Katz’s pastrami almost seven years ago, and I thought it was great. And I wanted to do something totally different.” That, he said, was part of how he decided to focus on smoked—as opposed to cured—meat.

Bernamoff said he was thrilled for Katz’s success at 125 years.

“Katz’s is the place,” he said. “There’s nothing else like it. Nothing can ever replace it, and hopefully nothing ever will.”