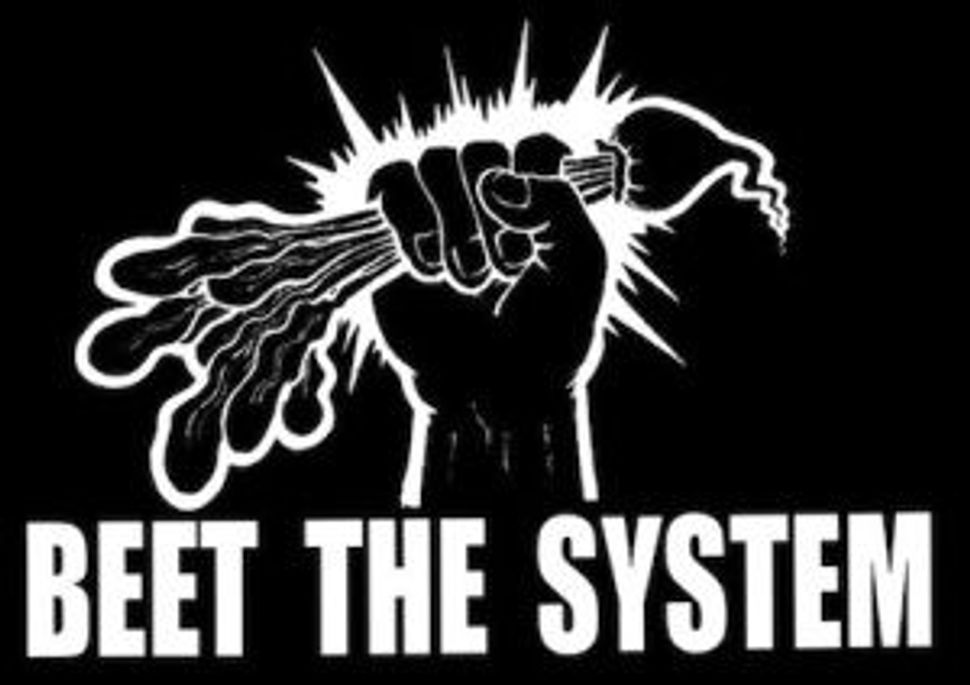 What is the purpose of a community garden? A few weeks ago, I would have said that I knew the answer to this question: that a community garden’s purpose is to nourish people with healthy food and to subvert a corrupt system by providing an alternate model.

However, at this year’s Hazon Food Conference at Isabella Freedman Jewish Retreat Center, Rabbi Noah Farkas challenged me to imagine the larger impact community gardens could have in creating a more just food system across lines of race and class. He pushed me to question how community gardens can lead us not just towards rejecting the system, but also changing the system itself.

While community gardens are popping up across the country, there are still many people without enough healthy food on the table. At the food conference, we watched the documentary A Place at the Table and learned how a single mother earning minimum wage became ineligible for food stamps but was still unable to afford enough food to feed her children. We also learned firsthand from workers and activists within the food industry that people who grow, transport, and sell food are disproportionately food insecure because they don’t earn enough; indeed 6 of the 10 worst paying jobs in the country are within the food system.

While community gardens certainly help provide food to those that don’t have access, planting gardens alone will not change this wealth inequality nor will it end chronic hunger. So what else do we need to be doing?

In order to truly fight for food justice, we need to talk about how food insecurity is inextricably tied to unjust wealth distribution: to low wages, tax breaks for the rich, and cuts to food stamps, to name a few. Ending hunger goes beyond bringing local produce to a food pantry; it is also about advocating for a radical redistribution of wealth that will give everyone a sense of autonomy and choice in putting food on the table.

The good news is that the organized Jewish community is already hard at work on this! Mazon: A Jewish Response to Hunger not only provides grants to food banks across the country, but also encourages asking elected officials to prevent cuts to food stamps. Jews United for Justice, based in Washington, DC, is working to raise the minimum wage in Maryland. Bend the Arc: A Jewish Partnership for Justice is advocating for a tax fairness campaign in California and a nationwide minimum wage campaign for people in the caregiver profession. This brief overview doesn’t even include the many individuals within the Jewish community, such as Lisa Levy, Director of Policy, Advocacy, and Organizing at the New York City Coalition Against Hunger, who are deeply committed to anti-hunger work in various organizations around the country.

Tackling systemic issues may seem much more daunting – and perhaps less directly impactful – than growing carrots and kale. To be clear – I’m not saying we should stop growing food to focus solely on systemic issues. Planting community gardens and broader food redistribution efforts impacts millions of lives on a daily basis. Rather, I am challenging us to think creatively about how we can do both.

Rabbi Farkas has already begun to pave the way. He suggests that community gardens can also serve as town centers, places where we can come together across lines of race and class to learn about and advocate for a more just and resilient food system. Bringing this idea to life, Rabbi Farkas founded Netiya, an interfaith partnership organization that engages communities across Los Angeles to cultivate gardens not only to donate the produce, but also to build community power to fight for food justice.

We don’t need to do this work alone, and in fact, our strength and resilience as a community can empower us to make change. If you are part of a community garden, what would it look like to begin to incorporate food justice? If not, what are the “town centers” already within your community that could bring people together around these issues? Together, let us ask: what can we, as Jews, uniquely contribute to the food justice movement?

I am ready to take action! How can I get involved?
• Advocate for anti-hunger legislation and policies! The New York City Coalition Against Hunger has resources for how to take action on current campaigns.
• The Welcome Table: learn about and advocate for restaurant worker’s rights.
• The Food Chain Workers Alliance: Learn about and advocate for food industry worker’s rights, including fair wages and earned sick time.
• Stay tuned for the Hazon Food Justice Program Guide, which will provide more ideas to involve and engage your community!
• Join the Jewish Food Justice Movers and Shakers Facebook page!

Davida Ginsberg is a Boston-based community organizer and food justice activist. She is an alum of the JOIN for Justice Jewish Organizing Fellowship and a leader of the Moishe Kavod Jewish Social Justice House’s Farm to Shul Team.