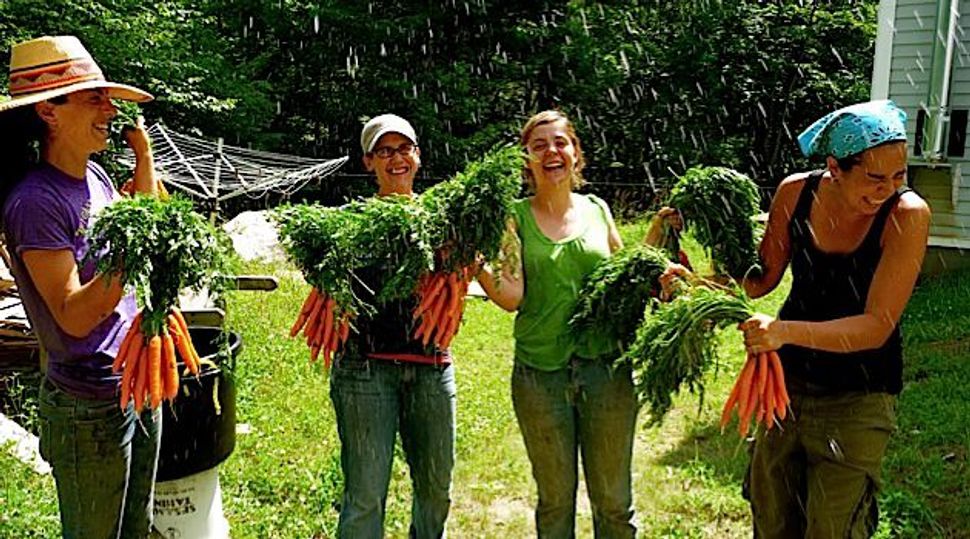 Seven years ago, Nigel Savage, founder of the Jewish environmental group Hazon, typed the phrase “Jewish food movement,” in quotes, into Google. There were zero results. Enter those words today, and you will find 80,100 results.

But Savage no longer has to rely on Google for proof of his movement’s success. A study released March 10 by Hazon and several Jewish philanthropies shows that the Jewish food movement — and the associated Jewish outdoor and environmental movements — are on the rise.

The study, which is the first of its kind in the Jewish environmental world, surveyed the range of immersive programs (of four days or longer) in Jewish outdoor, food, and environmental education, or JOFEE, as Hazon refers to it. In 2000, the year of Hazon’s founding, immersive JOFEE programs drew 197 people, but by the year 2012 such programs drew over 2,400 people annually. An immersive JOFEE program might include a bike ride through the Negev desert, a farming apprenticeship centered on Jewish learning, or teaching gardening at Jewish summer camps.

“What this study is substantiating is tremendous growth in JOFEE,” Savage said. “It’s [happening] because around the country people have said, ‘We want to connect the dots between Jewish tradition, food, the environment and the outdoors.’”

When Hazon began its first cross-country bicycle ride in 2000 to raise environmental awareness, there were just 6 JOFEE programs in America. By 2012, there were 41 programs, largely centered on hands-on outdoors experiences with Jewish farming groups like the Jewish Farm School, Adamah, and Pearlstone Center. Many of these groups operate under the auspices of Hazon, which has become the movement’s umbrella organization. Hazon completed a merger with the Isabella Freedman Jewish Retreat Center, another environmental non-profit, in January 2014.

The study, which surveyed 655 adults involved in JOFEE programming, highlights the potential of JOFEE programs to help alienated Jews reconnect to Jewish life. Of those participants who said they had grown disengaged from Judaism, 32% cited JOFEE experiences as a top reason they had returned to Judaism, more than any other experience. “We see people who say, ‘The community didn’t speak to me, [but] this expression of Jewish life is speaking to me,’” Savage said.

Another piece of good news for Hazon: young Jews are flocking to these programs more than other demographics. About 43% of participants hail from the 21 to 30 age group much coveted by Jewish organizations.

Given these numbers, Savage thinks anyone worried about the future of American Jewry would do well to look to JOFEE. “The headline story has been flat to down,” he said, citing the Pew Research Center study of American Jews, which showed increasing disengagement among American Jewry, especially young Jews.

Many of the professional staff that run JOFEE programs also were drawn to their positions because of a previous experience with Jewish environmental education. Savage himself was motivated to found Hazon only after participating in a Jewish wilderness program in the 1990s.

Hazon served on the advisory board for the study, which was conducted by two research firms and funded by six philanthropies, including the Schusterman Family Foundation, Jim Joseph Foundation, and UJA-Federation of New York. Although the report makes the case for supporting precisely the kind of programming run by Hazon, Savage said Hazon’s involvement didn’t impact the findings. “The objectivity is strong and clear – the researchers conducted the research, analyzed it and wrote the study,” he said.

Whether or not Hazon and other JOFEE programs can offer widely usable models for stemming the tide of assimilation remains to be seen.

But Savage is certain JOFEE programs can offer an avenue into Jewish life for disengaged Jews who have a specific interest in food, the outdoors, or the environment.

“If you asked many of our participants and our leaders, ‘Which is more important to you, having a Jewish impact or having an impact in terms of sustainable food systems or the environment?’ People scratch their head, and say, ‘Why do I have to choose?’ Savage said.