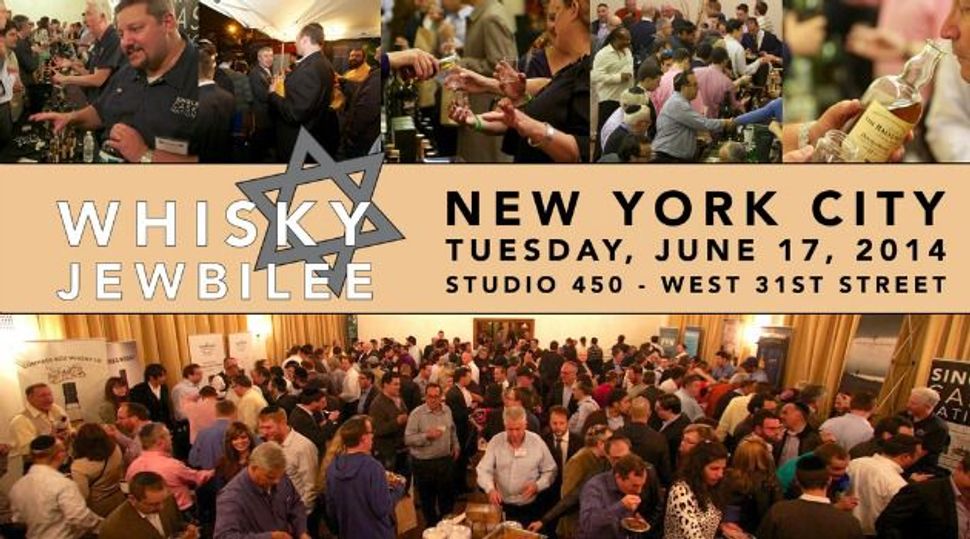 Whisky Jewbilee is moving up in the world. The kosher whisky event that started in 2012 when the much bigger WhiskyFest New York shifted from a Tuesday evening to a less Jew-friendly Sabbath timing, has announced its plan for 2014 and it involves moving itself up in terms of esteem, calendar and just plain location.

The headline change is a June 17 date. As WhiskyFest New York goes back to a weeknight (Wednesday, October 29), Whisky Jewbilee has moved its date up to the early summer and severed the calendar connection to Whisky Advocate’s massive event. With the fall holidays — and co-founder Joshua Hatton’s significant wedding anniversary — sprinkled throughout September and October, the organization decided to move to an “underserved time frame.” Hence June.

I put it to Hatton that it’s underserved for good reasons — June, and the summer in general, is neither a time to come to the city nor is it a time to drink dark liquor. He responded by saying that they knew the risks but the organizers were willing, with pun intended, “to take a leap of faith.” And he stressed that tickets, at $110 each, were selling strongly with 80% already “allocated” since they were put on sale in early February. The proof (again pun intended) of the choice will be in the attendance.

The June date will gather folks from the Northeast in a new venue. Again just around the corner from Penn Station — for easy access from New Jersey and the bus coming in from Maryland — but this time it’s up near the angels on the 12th floor. Studio 450, on West 31st Street between 9th and 10th Avenues will allow for more tables, more attendees, roof access and more space between the attendees (which, given the elbow jostling of last year and the warmth of a New York June, will be important.) Although the cigar event does not yet have a confirmed partner, the rooftop should be idyllic, except for those of us who would rather enjoy the view without smoke!

From a trade point of view, producers seem prepared to sign up for a New York event in June. In the new location, there will be 15% more tables, and, according to Hatton, 65% of those tables are already taken — with just about everyone coming back. The offerings should be somewhat similar to last year, with Balblair and Tomatin among the new representatives of scotch and a slightly higher representation of American whiskies to accompany Koval, Four Roses and Angel’s Envy (among others) who have been there each year. Reflecting that, the new Whisky Jewbilee bottling is pending the approval of the Alcohol and Tobacco Tax and Trade Bureau but Hatton assures me that it will be an American whiskey.

For those New Yorkers able to take the afternoon off, or those coming in specially for the day, like one Australian visitor, there will be a pre-event where David Perkins from High West Distillery will lead a blending class in the afternoon as he introduces a new whiskey. Tickets are $65 for what is a gimmick, but it’s a fun gimmick. When I explain whisky to people who know little about it, it’s the blending that’s the least intuitive. And actually being able to see a blending is relatively rare so having someone there to explain is a good idea for an event that’s trying to grow a core constituency.

Also good for Whisky Jewbilee and its chances of selling out a 350-person event in June, is being included in The Spirits Business’s feature of “The World’s Top 10 Whisky Shows.”. As the stakes rise for Whisky Jewbilee, so do the prizes and the venues. It remains to be seen whether its new heights will make it the angels’ envy or the devil’s cut.