The Lower East Side Is Now Kosher-Less 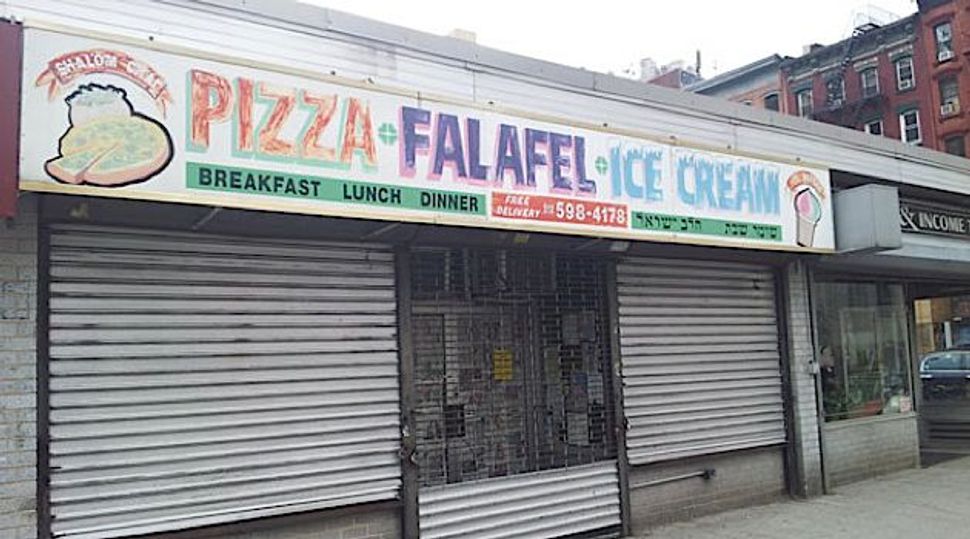 Update: June 12th: It would appear that the close of Shalom Chai was temporary. And while the owner owes thousands to the landlord, the pizza shop is in fact open. More details coming soon.

It’s over: The last kosher restaurant on the Lower East Side is gone.

As if to highlight kosher’s tragic state downtown, Shalom Chai pizzeria has shuttered in the most ignominious fashion — evicted from its Grand Street digs after a turbulent five-year run that included multiple health-code violations.

Adding insult to injury, the eatery got the boot just before Shabbat last week, according to BoweryBoogie, which broke news of the closing — complete with a photo of the eviction notice against owner Tiferet Food Corporation.

As the Forward reported in March, Seward Park’s board voted against a kosher tenant for the space after an impassioned online campaign urging a replacement for Noah’s Ark. Comfort Diner will occupy the space instead with its second Manhattan location.

“We have been in legal [battles] since last year, and Tiferet Foods owes the co-op a significant amount of rent and we have not been paid since late 2013,” Durant told the Forward by e-mail. “They signed and agreed to vacate on August, 2014 and have not followed through with the terms of that agreement. Because it is in legal, I cannot comment any further.”

No one answered a reporter’s call at Shalom Chai, which still has a working phone number.

Shalom Chai had closed more than once; the New York City Health Department shut the place down in 2012 and 2013 after inspections turned up evidence of mice and “inadequate personal cleanliness” among staffers.

The rodents might be the only ones who miss Shalom Chai’s pizza, according to its online reviews. “Cheese on a kosher sponge,” carped one Menupages kvetcher.

So what’s a kosher diner to do in downtown Manhattan?

Below Houston Street, there’s not much, despite a flowering of Jewishy spots like Russ & Daughters Café, Baz Bagels, and Black Seed, none of which are kosher. There’s Reserve Cut, the haute steak joint near Wall Street, but eye-popping price points — $63 rack of lamb, anyone? — make it more of a special-occasion spot.

The Lower East Side Is Now Kosher-Less