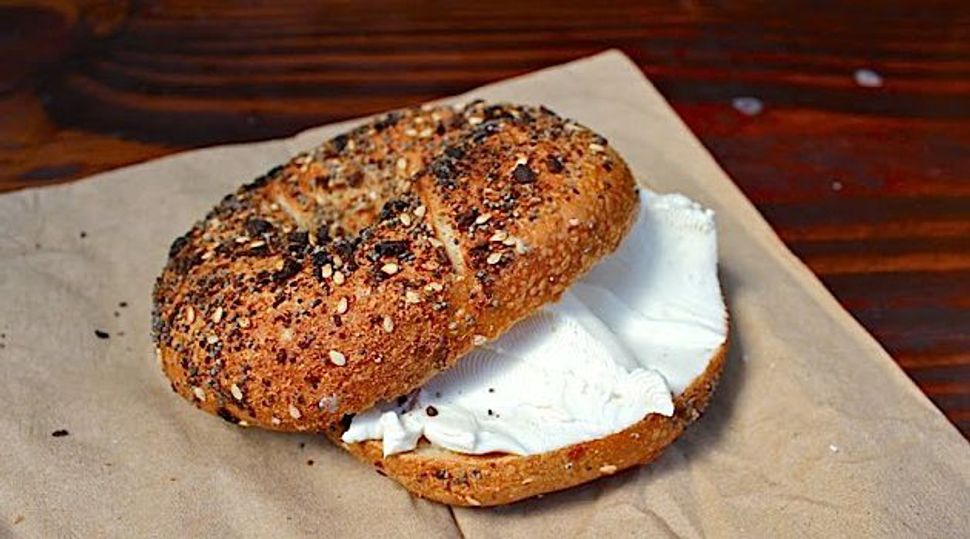 Avocados and burritos be warned: bagels (yes, bagels) are hitting Oakland by storm. In just the past two years, Oakland has seen four independent bagelries open their doors, to much success. And demand is only growing (these are the people, may I remind you, who waited for hours in the balmy rain this past March for just a bite of a freshly fed-exed New York bagel).

At first, it seemed an unlikely pairing — breezy, light California cuisine with the dense, nutrient-deficient Jewish bread of my youth. But, after allowing the San Francisco sourdough starter dough to fully permeate my taste buds, and (begrudgingly) accepting the more compact (read: too small), I’ve started to get quite a kick out of these California not-quite-bagels.

It is quite amazing actually — these Cali bagels manage to be somehow both overwhelming in their density and mouth-feel, yet also underwhelming in their flavor and size. Which isn’t to say that they are explicitly bad, just somehow lacking something. The grittiness of New York, perhaps? But, I’ll take what I can get. Especially on those homesick weekend mornings, when the sun is shining a little too brightly and people are smiling a little too happily for the anxious New Yorker in me to bear. So I present you with the four best home-made bagel spots Oakland has to offer.

Maybe you remember reading about the scientifically perfect bagel that was being cooked up in a secret Oakland kitchen last year? Well, I tried it. While Baron Baking’s operation doesn’t have a retail store-front, they do sell their bagels at a handful of exclusive cafes spread across the Oakland area. I hopped over to Chop Bar, a fairly fancy spot down on 4th street that also, thankfully, has a convenient coffee + sandwich pick-up window (for those of us who like to eat our bagels while still in our sweatpants).

While I’m reticent to lay down $3 for a single bagel ever, I figured my research wouldn’t be complete if I didn’t try Dan Graf’s famed act of science. And I’m so glad I did. I loved the flavor and consistency of the dough, and found myself totally satisfied to tear it into chunks and munch on it plain (albeit, toasted, as all California bagels tend to be). The crust is nice and crisp, and approximates that New-York-sink-your-teeth-in-and-pull feeling in a thoroughly satisfying way — though I do wish that the bagel as a whole was just a bit bigger. While this bagel is definitely good, is it worthy of it “better than” New York reputation? Je proteste.

Ask any local what they think of Beauty’s Bagel Shop, and you are apt to get an exceedingly enthusiastic response. Oaklanders are over the moon for Beauty’s — a small, trendy Montreal-style bagel shop in the heart of the Temescal neighborhood. A line snakes out the door on most weekend mornings for these bad boys. The bagels are boiled in honey water, outfitted with sugar and salt, and then finished in a wood-fired oven. Small and compact, the bagels have a quite subtle flavor — often taking second stage to the tasty sandwich concoctions that line the menu (such as the egg sandwich, which is actually an omelet heaped on a bagel, and the delicious open-faced lox and cream cheese option). With the cheerful chatter (and attire) of Oakland’s brunch-goers filling the small square dining room, Beauty’s Bagels also promises to be a people-watching treat. While very different from the bagels of my youth, as they say: When in California, do as the Californians do.

Authentic Bagel Co. supplies bagels to many of the cafes in Oakland and the surrounding Bay Area — and for good reason. The bagels are small, like most California bagels, and chewy, with a somewhat-flavorful crispy outer layer. I recommend popping them in the toaster before eating. This East Coast Meets West operation is run by the “bagel brothers”— two Jewish, Rhode Island-native, brothers who claim to be following their great-grandmother’s “authentic” bagel recipe from the turn of the century.

Situated in Jack London Square, and a schlep from most of residential Oakland, the storefront is worth paying a visit to. It has that delectable hole-in-the-wall energy to it — with orders (and receipts) written by hand and standing room only inside. Something about the unapologetically fast-paced and scrappy atmosphere of Authentic Bagel and Co. did, against my better judgment, feel authentic to my East Coast bagel sensibilities. But, of course, it’s in Oakland — and the menu offers vegan pretzel dogs and jalapeno jam alongside their pumpernickel and cream cheese.

With flavors like Asiago-pesto, spinach, and orange cranberry, this newbie bagel shop definitely doesn’t resemble any Old Brooklyn Deli that I’ve ever been to. But with a bagel that tastes this good, I honestly don’t care. Hands down, these New York knockoffs (though the owners protest that the “Old Brooklyn” referenced in the name of the place is an ode to a local California county that was annexed by Oakland in 1872 and not the too-trendy NYC borough where my grandparents were eating bagels before they could speak a word of English) are the most flavorful and reliable bagels that I’ve had in California. Old Brooklyn makes a bagel that is both crunchy and soft, with a firm outer layer that sets you up perfectly for an inner dough that melts in your mouth as you chew. Best of all: these bagels actually look like bagels. There is nothing waif-like or petite about them.

The deli carries an exciting variety of sandwiches, which are playfully named after local spots in both California like the delicious “Claremont” (eggs, grilled salmon, and Swiss cheese), and New York (their “Tribeca” includes corned beef and pastrami, coleslaw, and Russian dressing). Eating this bagel transported me back to seventh grade, sitting in my parent’s dining room, pounding down bagels during a Yom Kippur break-fast. Yes: they are that good.