Caplansky’s Serves Up Beer With Pickle on Rye 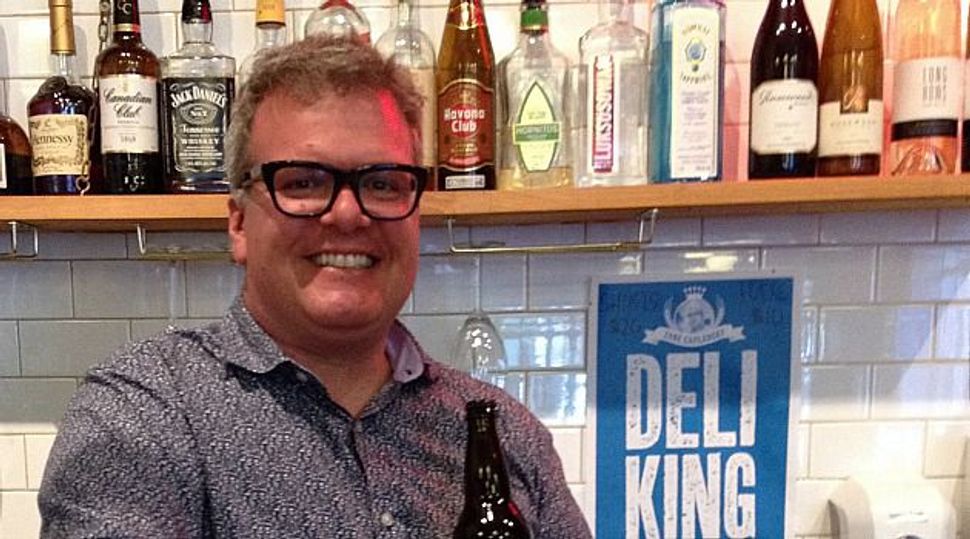 Zane Caplansky shows off his new beer in his eponymous Toronto deli./Renee Ghert-Zand

Forget the lime wedge or orange slice. This beer comes with a pickle garnish.

Caplansky’s Delicatessen in Toronto has introduced its own brew, called Deli King Spiced Dark Rye Lager, and it really does taste better accompanied by a sour dill.

This is not only because the beer is brewed with rye (in addition to barley). It’s also because it is flavored by the proprietary brisket rub deli man Zane Caplansky uses to make his delicious smoked meat (sort of like a deli sandwich in a bottle).

“The vinegar of the pickle cuts across the hoppiness of the beer,” Caplansky told the Forward, referring to a lager’s bitter, tangy taste. “And in any case, garnishing a beer with a pickle just goes with the chutzpah and humor I’m known for.”

Although some diners might order a beer to go with their deli sandwich, most people do not usually associate Jewish delicatessens with alcoholic beverages. Many delis are not even licensed to sell them, and even at Caplansky’s, which has been licensed since its opening, most patrons ask for a dark cherry soda or gingerale.

“Newsflash: Jews don’t drink!” Caplansky, 46, said with tongue in cheek. In fact, two years after the deli opened, he moved the bar to the back of the restaurant so that the meat slicing station could be in a more prominent position.

“I’ve always wanted a signature beer,” Caplansky said as he pulled a pint. But it was only a few months ago that he acted on his desire by partnering with Greg Landucci of Barley Days Brewery in Picton, Ontario. Landucci had approached Caplansky ahead of the Ontario Craft Beer Festival, during which beers created as collaborations microbreweries and local celebrities are showcased.

“We used to carry a beer called Denison’s Dunkel, which paired really well with our smoked meat sandwich. So, I knew I wanted to do a dunkel, which is a German-style dark lager,” the deli man explained.

The proprietary brisket spice rub used in the brewing process is not only tasted in the beer, but also smelled. It may be difficult to discern each of the rub’s ingredients (black pepper, onion, garlic, mustard seed, celery seed, coriander, red chile pepper, dill seed, clove and cinnamon), but the general aroma of smoked meat is definitely there. The spices smooth out the lager and make for a pleasant aftertaste.

Caplansky reports that Deli King, which was launched on June 17, the deli’s 6th anniversary, has been well received by patrons. It will be available at Caplansky’s original location in downtown Toronto, as well as at the two new franchise outlets set to open this summer at Toronto’s Pearson International Airport.

According to Caplansky, who has also become a Canadian food TV celebrity, his business has doubled in the past two years. In addition to the restaurant and the two new franchises, he has a food truck, a busy catering business, and is overseeing the construction of a new commissary kitchen.

The introduction of Deli King Spiced Dark Rye Lager is just one aspect of this growth and innovation. “When you’re not the new ‘new thing’ anymore, you have to give people a reason to come in and try you out,” Caplansky said.

Caplansky’s Serves Up Beer With Pickle on Rye