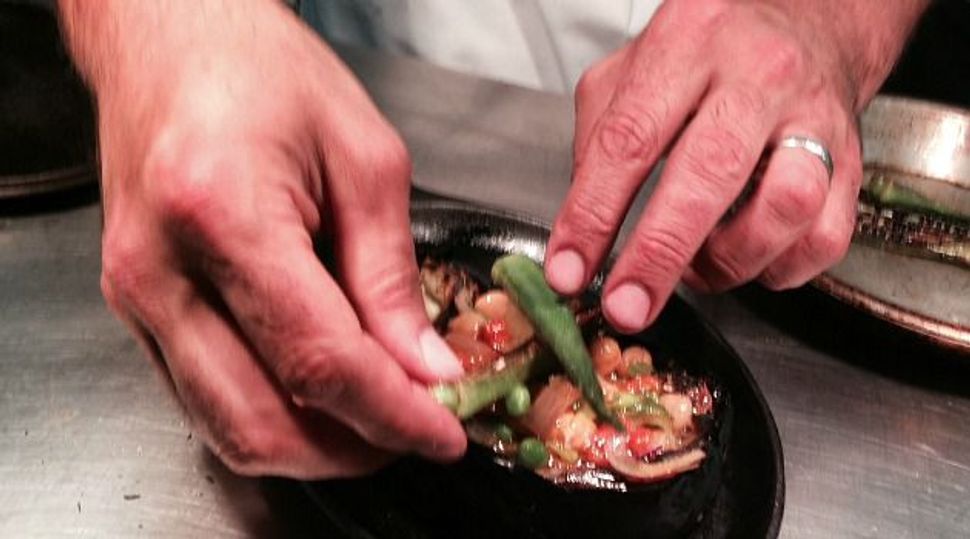 Shaya’s restaurant, Domenica, opened as a traditional Italian restaurant in 2009. Slowly but surely, however, Israeli flavors started to seep into his menu. The result? Italian staples like slow-roasted goat shoulder and broccoli rabe find themselves folded into shakshuka.

“When you’re Israeli, food is a huge part of your culture,” Shaya said. “There’s no like ‘Oh, I’m not into that.’”

Born in Bat Yam, a coastal town in Israel, Shaya moved with his family to Philadelphia when he was 4 years old. As the head of a struggling immigrant family, his mother worked two jobs to make ends meet. As a result, Shaya would often cook dinner for the family. His meals started off simple: a microwaved potato with cheese. But on those rare special occasions when his Israeli grandparents would come to visit, the kitchen would fill with the comforting smells of roasting vegetables, infused with the flavors of his Savta’s Bulgarian ancestry.

“I fell in love with food because my grandmother would come from Israel every year,” Shaya explained. “I would never know when she was arriving so when I would open the door and smell peppers roasting on an open flame, it was like ‘Oh my God, Savta’s here!’ That started creating a connection between the smell of food and family.”

The next few years were tumultuous to say the least. By his own admission, Shaya was “a shitty little kid” who fell in with “the wrong crowd.” He was constantly getting kicked out of class. His salvation came in the form of a Home Economics teacher who would put him to work chopping onions when others teachers booted him out.

“She really was the turning point for me to get serious about something. She got me my first restaurant job, she drove me there, she checked up on me that I was showing up on time.”

After graduating from the Culinary Institute of America, Shaya spent some time cooking at the Rio Hotel and Casino in Las Vegas and Antonio’s Ristorante in St. Louis.

He spent 2007 in Italy to soak up the techniques he would need to open Domenica.

With the restaurant established, he was surprised to find himself introducing Israeli dishes into his repertoire. He started small: a dish of tahini here, an Israeli bottle of wine there. The customers went wild.

“We were selling more Israeli wine here than anywhere in the state of Louisiana,” Shaya laughed.

Today, Shaya hosts Passover and Hannukah meals at the restaurant, serving dishes like zaa’tar buttermilk biscuits with babaganoush, latkes with a side of creole-cream-cheese-stuffed deviled eggs topped with salmon roe, and Sicilian sea-salt matzo with olives and rosemary. The Passover menu can draw in up to 400 people.

Shaya is the first to say that he’s “fallen head over heels” for New Orleans. His kitchen is well-stocked with locally sourced Southern ingredients — and he often blends them with Israeli flavors.

Though Shaya says there have been “many failed experiments,” his fire-roasted eggplant stuffed with okra and drizzled with tahini is not one of them. Each spoonful was a surprising fusion of Tel Aviv and the Big Easy. The chef pointed out that the eggplant and okra are grown in nearby farms — and to him, that’s important.

“Food doesn’t have to be fried chicken for it to be Southern,” Shaya explained. “It just has to be from the South.”

Alon Shaya shared his recipe for okra-stuffed coal-roasted eggplant with the Forward. Try it for yourself at home!

2) Combine the tomatoes, leek bottoms and roasted peppers and cooked garbanzo beans together in a saucepot with the thyme and olive oil. Cook over low heat until the vegetables have held their texture in the pan but melt in your mouth. Approx. 20 minutes on a very low flame.

3) In a food processor, combine the tahini, lemon juice, garlic and salt. Process until very smooth and flavors combine. You may need to add some water so the tahini will have a texture conducive to drizzling.

4) Slice raw okra and sear off in a sauté pan until golden. Season with salt.

5) Cut the roasted eggplant in half lengthwise keeping it attached at the top. Season with salt.

6) Drizzle the tahini over the eggplant. Spoon on some of the vegetable “confit” and top with the seared okra.

Note: When I was a child, my grandmother would roast peppers and eggplant in the house over an open flame. It is one of my first food memories. This dish allows me to relive those memories through the wonderful aromas and flavors it has. — Alon Shaya