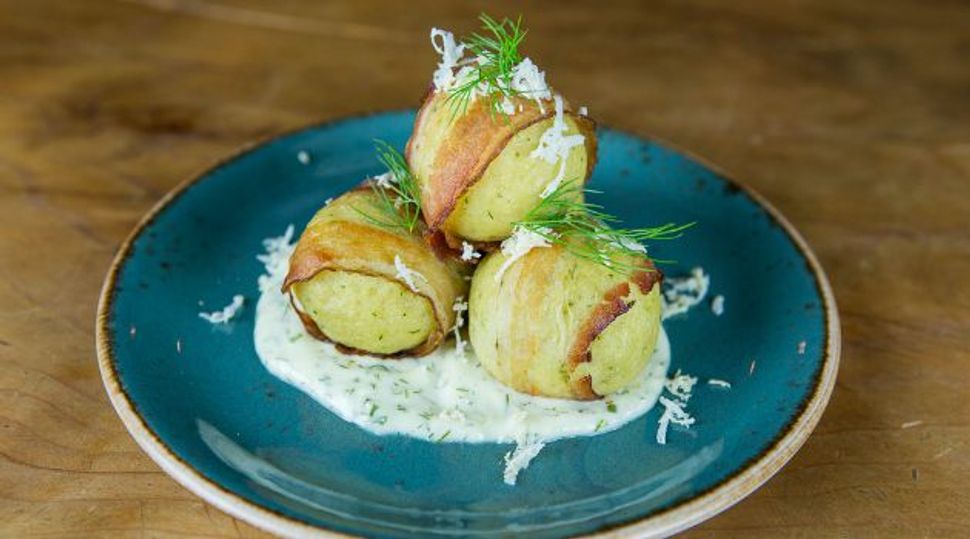 Not your mama’s matzo balls. Photograph courtesy of The Gorbals

Bacon-wrapped matzo balls put Ilan Hall on the map when he opened The Gorbals, his much-ballyhooed eatery in Downtown L.A. Now, New Yorkers are finally getting to experience Hall’s in-your-face, wackily inventive food with a new East Coast outpost of The Gorbals atop an Urban Outfitters “concept store” in Williamsburg.

Five years since his L.A. debut, Hall’s also proved he’s much bigger than one culinary gimmick. The victor of Top Chef’s second season, he now hosts the Esquire Network’s wildly popular competitive cooking show Knife Fight — executive-produced by none other than Drew Barrymore. While not quite a household name à la Batali or Ramsay, Hall’s as close as it comes to a bona fide culinary celebrity.

“People do come into the restaurant because they know my show or they’ve seen me on Top Chef,” he told the Forward from his shiny new Brooklyn kitchen. “It’s good press. But New York City isn’t really like that. I’m just a chef.”

But his menu belies his modesty: Think falafel-crusted veal sweetbreads with “cool ranch” hummus ($16), a “Jewish lunchbox” of gefilte fish cakes, kimchi, barley, and poached egg ($15), and a banh mi poutine, whose insane mash-up of pulled pork, mozzarella and pickled carrots somehow comes together beautifully into an irresistibly decadent whole. And, of course, those matzo balls ($9).

The bacon-wrapped matzo balls generated massive headlines. Did you design them to attract attention?

They happened completely by accident, like most things. I was catering a friend’s birthday party — a fellow Jew, in fact. I jokingly made up a menu — a lot of the time, I’ll write out a menu before I even have dishes, just to dictate how the menu should evolve before a dish is made. I threw them on there, they turned out really well, and we just kept making them. I didn’t know at the time the entire future of my career would be based on them.

Have you had pushback from Jewish diners who think you’ve gone too far?

Most people take it in spirit it’s intended. The people who get offended are mostly non-Jews. I got an email from a guy who said it was so disrespectful, I was trying to be insulting on purpose. That wasn’t the case at all. It’s just me being cheeky. It wasn’t an anti-Semitic thing. But some people have taken offense.

Your grandfather was a kosher butcher in Israel. Have you ever cooked kosher?

I’ve done kosher events. But I’ve never kept kosher or been interested in kosher food. I actually disagree with kosher law. If people want to keep kosher, it’s their business. It’s their life. But I feel like the laws of kashrut were all marketing, from its inception. It was billed as way to have cleaner products, but the advent of it was, “Oh this guy’s selling pigs. Don’t eat pigs, pigs are dirty. Eat my lamb.” Funny enough, my grandfather had to keep it secret that the family wasn’t keeping kosher at home.

In any case, all the purveyors we get meat from are super high-quality and sustainable, with very clean practices. The pigs we’re getting have better lives than most kosher chickens. Mass-produced kosher products that are genetically modified? There’s no ruling on that in modern society. If you have someone who’s a reputable purveyor with quality products, you’ve got a better chance of delicious, safe, clean food. I don’t need a rabbi to bless my chicken to say it’s high quality.

A close-up of a roasted pig’s head dominates The Gorbals Brooklyn’s web site. How many of those do you move in a week?

A lot. We sell at least one a night. The other day, I think we sold five in a night, which is insane. In L.A., we got a lot of write-ups for it, but didn’t move as much. In Brooklyn, almost every day, we sell a few.

What would you recommend for a diner who wants to try an Ilan Hall signature dish, aside from the bacon-wrapped matzo balls?

I worked really hard on the new menu. Everything represents what we do. I had some really aggressive dishes when first opened in L.A. I did pork belly braised in Manischewitz, just because it was good. But I’d be lying if I told you it wasn’t a little of me trying to be funny. Again, a lot of the dishes now came on menu by accident. For example, I use broccoli stems a lot. We treat them like asparagus. So I’d always have a ton of leftover broccoli florets. One day, I poured a mix of brown sugar, soy sauce and vinegar on them. It was so tasty; everybody fell in love with it. It’s now our biggest seller in L.A.

You’re the son of a Scottish-Jewish father and Israeli mother. Did that influence your cooking?

There’s a lot of connection to Israel personally — I have a lot of family there, and my parents both lived there. Growing up in Great Neck, New York, we would always have ham, sliced meats, salami in the fridge. And we always had hummus. My mother’s not the cook — that’s my father — but she’s great at sandwiches. She’d make a terrific hummus and ham sandwich. So the melding of traditional Jewish or Israeli foods with ham worked very well. Likewise, in my cooking now, it’s a melding of flavors, rather than creating an exact dish, that comes from my lineage. I like playing with ideas, making them into something delicious.

Can you explain the name of the restaurant?

My father grew up in Glasgow. The Gorbals was the place where immigrants moved in that city. A lot of mostly poor Jews moved into the Gorbals after the war. My father’s family was one. His father was from Berlin. The Gorbals was very dangerous. Now, it’s changed — it’s very pretty. It’s right in the heart of Glasgow, on the banks of the river Clive.

What’s next? Are you thinking about taking The Gorbals national?

I don’t want to think too far ahead. I like where I am right now. I’m in the kitchen every night, cooking, and I’m loving it. It took five years, but I built L.A. to a point where I could walk away and open New York. I have no plans of world domination with the restaurant. It’s hard to keep quality up when you expand too large. I have friends who own multiple restaurants and it’s incredibly stressful. I want to be happy, and I don‘t want to blow my brains out.