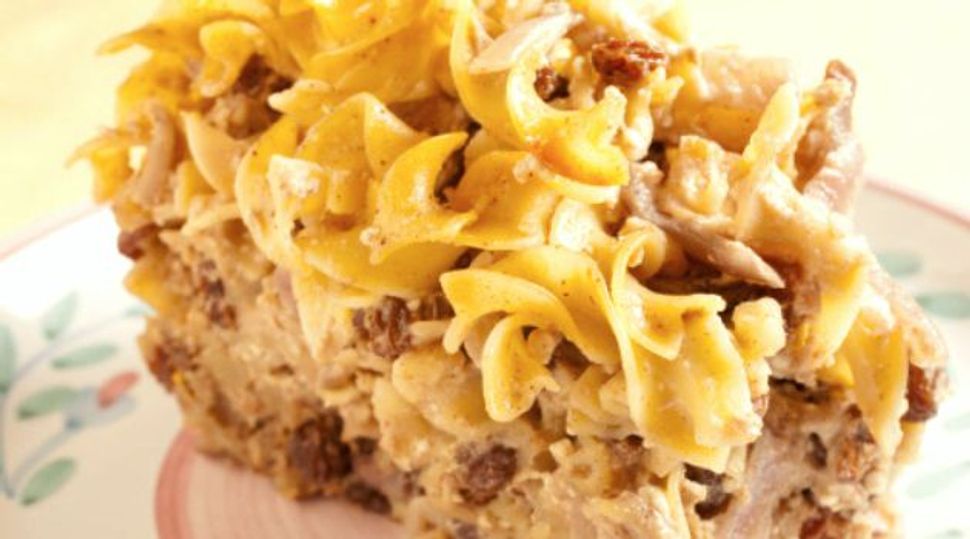 When I learned that Liam, a friend of my 9-year-old son, would be joining us at the potluck dinner in the synagogue sukkah because (as he told his mom) “Jews have the best food,” I reluctantly abandoned my plan to purchase a tray of spanakopita. I felt stymied by the task ahead: to prepare a wholesome dairy dish of Jewish origins that would appeal to children and adults alike, and one that would also survive the trip to the sukkah on a brisk autumn evening.

Then I remembered kugel. My mother-in-law’s noodle kugel, to be precise, handed down to her by her own mother, who is known in these quarters as Grandma Rae. Rae, perhaps because her husband died young of a cardiac-related illness, specialized in healthy cooking, and her kugel bears little resemblance to the sweet, rich noodle kugels of my own youth, which call for at least a stick of butter and a tub of sour cream, topped by handfuls of crunchy cornflakes.

Rae’s kugel is neither savory nor overly sweet. She somehow managed to eliminate what my husband Jeremy calls “the fun stuff” and still retain the traditional essence of a noodle kugel, which Yiddish-speakers call lokshen kugel. Imported from the shtetls of Eastern Europe, it is a filling, warming dish suitable for any autumn or winter evening. The version we make is much lighter than the conventional one, and spicier too, thanks to Jeremy’s addition of nutmeg and cardamom.

On Sukkot, Liam piled his plate high with the various potluck contributions. The son of a Presbyterian minister, this is a fourth grader who delights in sampling new cuisines, whether he’s in the jungles of Peru or the food courts of Flushing, Queens. After a few minutes of eating beneath the chilly skies of the rooftop sukkah, he leaned toward my son. “I like this dish,” he said confidentially, pointing toward a few crispy noodles in the corner of his plate. It was Rae’s kugel.

3) Parboil noodles (for about three minutes). Rinse and drain. Put noodles aside, mixing in one tablespoon of butter to melt while they cool.

4) Mix all other ingredients in a large bowl. Add noodles to mixture. Pour mixture into pan. Sprinkle wheat germ and brown sugar on top. Cover with foil.

5) Bake for about 45 minutes. Uncover and broil, on low if possible, until crispy, about 10 minutes. (Watch carefully to make sure kugel doesn’t burn.)