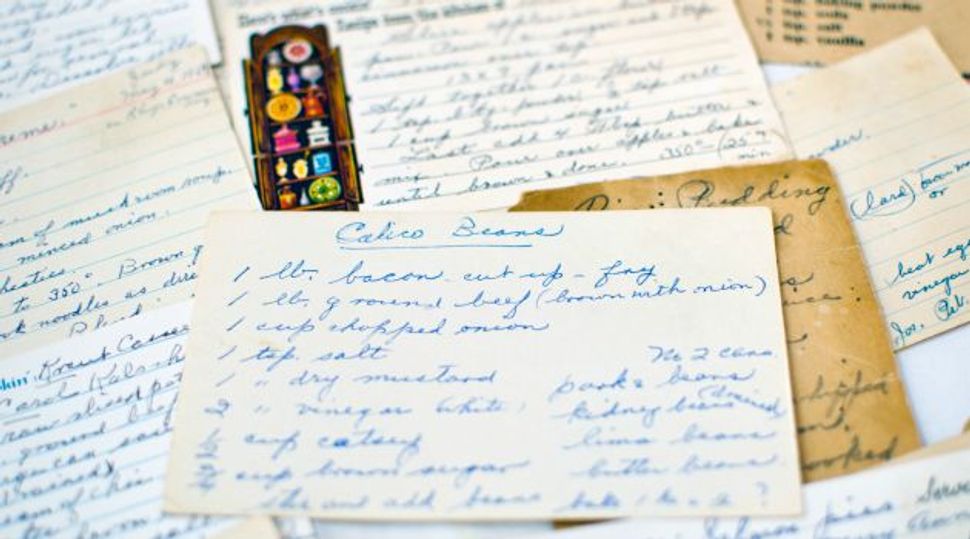 I recently received an email that contained a simple request. Write down my favorite recipe, I was told, and email it to the person at the top of the list. Then delete that person’s name, add my own email address to the bottom of the list, and send the resulting request-for-recipes to 25 friends.

There was just one problem. I don’t cook. At all. I never have. I hate cooking. I’m a take-out kind of gal. Yes, I can throw together an amazing salad. But recipes? I hadn’t a single one.

Nor did I want any. Thirty-six recipes turning up in my inbox?

Normally I’d just delete the email and go about my business. But I couldn’t. The person who’d sent it to me was my beloved daughter-in-law. For Amy I’m willing to move out of my comfort zone.

Of course, I did try to weasel out of it first.

“False!” she replied, reminding me that once, years ago, I’d whipped up a terrific batch of matzo brei for her and my son.

Busted! How do you turn down a DIL who not only includes you in an email that goes out to “friends” but knows you well enough to remember the one and only meal you’ve actually cooked for her?

“Okay, I’m in!” I told her. I wrote down my matzo brei recipe, then followed the instructions, and sent the recipe-requesting email to 25 friends.

Instantly, I heard back from three of them about why they weren‘t going to play. Two were too busy. The third “never participates in these things.“

I couldn’t blame her, of course, since I usually don’t either.

Over the next 24 hours, I heard back from a dozen friends, all writing to tell me why I could count them out. (Although one friend, in turning me down, emailed me her kale smoothie recipe as a kind of consolation prize.)

One thing was becoming very clear. The crowd I run with doesn’t cook. I have friends from all walks of life. Writers. Lawyers. Artists. Accountants. Academics. Social Workers. Syndicated Cartoonists. Rich and poor, young and old, from all over the country. All with one thing in common: they wouldn’t be exchanging any recipes.

“I don’t cook. I live in New York City. I simply don’t see the necessity.”

“Hey thanks but I don’t want to do this.”

“My lunch today? A radish and a half a can of refried beans.”

“Why would anyone cook when the taste you want is in a can?”

“Sorry Roz, you’ll have to take me off the list, but I hope you have fun with this.”

Obviously, I wasn’t collecting recipes at all! What I was collecting here were excuses.

I could just as well have sent out this email to my friends: Please email me the reason why, even if asked nicely, you wouldn’t even consider sending the first person on this list a recipe.

There was something comforting about it. I had chosen my friends well. These, indeed, were my peeps! And yet, all the adamant turndowns were just a tiny bit disheartening.

It seemed as though 100 percent of my friends would be sitting this one out.

Then Amy emailed to tell me that Linda, my best pal from college, a woman I hadn’t seen in decades (we’ve recently reconnected on Facebook) had come through with a recipe for a chicken mango dish.

Linda? Really? She was the last person I’d have predicted would come up with a recipe.

In college, the two of us had dinner together almost every night, and we always had the same thing, a dish we called “Hamburger Surprise,” which consisted of hamburger meat, scrambled eggs and Colby cheese, mixed together in a skillet, and served with Diet Doctor Pepper.

Occasionally, for a change, we’d dine on deep dish pizza, followed by a hot fudge sundae.

With four years of a diet like that, it’s a wonder we’re both still alive.

Maybe Linda had finally gotten into cooking. Or perhaps she’s just into friendship? Who knows? But I was surprised at how touched I was that she‘d come through.

Maybe I should consider moving out of my own comfort zone a little more often? Friendship, perhaps, should occasionally trump temperament? Or convenience?

In the meantime, not that you asked, but here’s my recipe for Matzo Brei:

In a mixing bowl, beat the eggs until they are totally mixed. Place both pieces of matzo on a plate and run VERY hot water over them for maybe 20 seconds so that they’re moist but not drenched. Then throw them into the bowl with the eggs and chop them up with a fork. Thoroughly mix the chopped up matzo with the eggs. Add salt. Over high heat, heat the butter in a large sauce pan. The minute it starts to sizzle, pour in the MIX and stir until the eggs are as dry as you like eggs to be. Serve with sour cream.

Roz Warren writes for the New York Times, the Funny Times, and many other venues. Her website is RosalindWarren.com. This essay first appeared on zestnow.com.