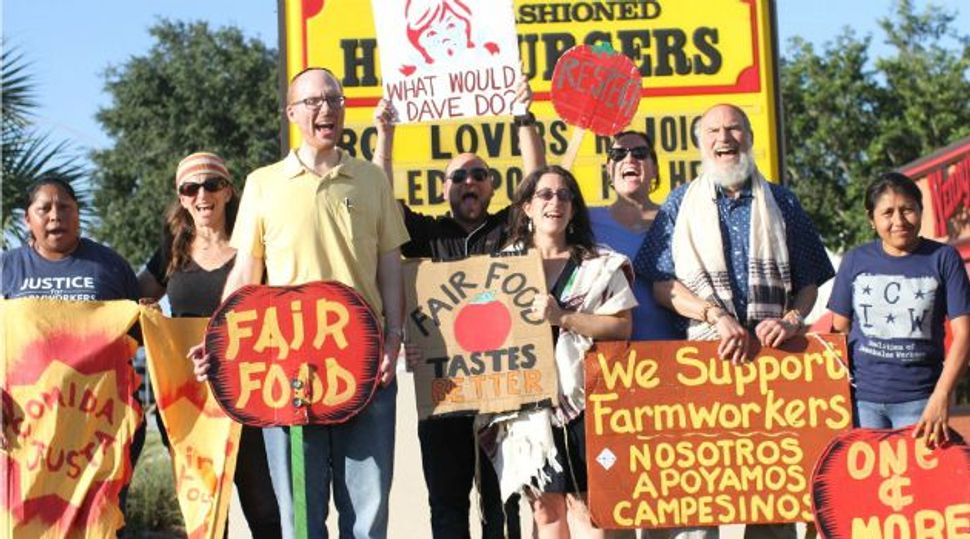 T’ruah rabbis and farmworker activists protest at a Wendy’s in Naples, Florida, calling on the fast-food giant to join the Fair Food Program. Photograph by Coalition of Imokalee Workers.

Who picks the food you eat? How are they treated? How much are they paid?

These are just a few of the critical questions that we often overlook at mealtimes. “Food Chains,” a new documentary, offers some powerful answers.

“Food Chains” is a snapshot of the current state of American farmworkers: underpaid, undervalued and facing a violent and unpredictable workplace in which they can’t report abuses because of fear of reprisals.

Farmworkers were left out of the labor protections most American workers have enjoyed since the New Deal, and while their hard work ensures that there is food on our plates, they are often invisible in the American conversation about food.

The creators of “Food Chains” traveled from Florida to California, interviewing farmworkers to get at the heart of the difficult conditions they face. But the film is also sympathetic to American produce growers, who are squeezing their labor costs to compete with cheap foreign produce and meet grocery stores’ demand for inexpensive fruits and vegetables.

The heroes of the film are the Coalition of Immokalee Workers (CIW), a groundbreaking organization led by the farmworkers of Florida’s tomato industry. (Truah: The Rabbinic Call for Human Rights, the organization for which I work, is CIW’s major Jewish ally.)

More than 90 percent of the tomatoes we eat each winter come from Florida, and the conditions there have historically been punishing. Wages have barely moved since the 1970s, and workers must pick more than 4,000 pounds of tomatoes a day to make minimum wage. But the CIW has fought to change those conditions, both by creating partnerships with tomato growers and by demanding that the corporate buyers of tomatoes — the grocery stores and restaurants that we all visit — stop denying responsibility for the conditions of the workers at the base of their supply chains.

CIW’s quest for justice for farmworkers — by engaging a nation of activists, convincing corporations that human rights are good business and bringing the growers to the table — is the story of hope at the heart of the film.

“Food Chains” does an excellent job of telling the history of the CIW’s struggle, and should energize everyone who sees it to demand better wages and human rights in America’s fields. It also lays out extremely clearly how the consolidation of the supermarket industry at one end of the food chain leads to human rights abuses in the fields at the other.

But the film only begins to tell the story of transformation that has happened in Florida. In 2010, more than 90 percent of Florida’s tomato growers joined the CIW’s Fair Food Program, guaranteeing higher wages and human rights for farmworkers. Suddenly, an industry that was once called “ground zero” for human trafficking in America was hailed by the New York Times in April as “the best working environment in American agriculture.”

A new world of k’vod habriot, human dignity, is being built, as human rights are written into the very fabric of an industry once known for punishing conditions. Workers are taking home higher wages; violence, wage theft and sexual harassment are being eliminated. Workers are coming together with growers to change the tomato industry together. This is food justice in action.

But some really critical questions are left off the table, including who picked your food, how they were treated and how much they were paid. It can be easier to focus on the ethical product rather than the farmworker. When we conceive of our relationship to our foods as one of consumers, making a different choice about what product to purchase seems like an easy mitzvah. But to do more — to meaningfully engage with corporations, to talk to the workers in the supply chain — requires additional effort.

One of the most difficult conversations I often have with Jewish food activists is that “knowing your farmer” is not enough; it doesn’t tell us anything about how the workers on our CSA farm or local orchard were treated. As a rabbi, I know that is not my tomato or banana that is created in the image of God — it is the person who picked that product.

We have to get beyond our assumptions about what would be better for American food — “Buy organic!” “Buy local!” — to make sure that food produced ethically is accessible to all Americans and not just the elite. And we can’t do that without talking to the workers first, asking them how they would transform America’s farms and placing their needs, dignity and expertise at the head of the table when we agitate for change.

Where do we all come in as activists? Most of the grocery industry (giant chains like Publix, which is the major villain of “Food Chains,” and Stop and Shop), along with fast-food giant Wendy’s, have yet to join the 12 major corporations who committed to human rights for farmworkers. That’s why T’ruah’s #TomatoRabbis have joined with thousands of other activists across the country in protests, and have spoken to store managers, sent letters and generally demanded that those corporations live up to their professed values and support the rights of the workers who pick their food.

These corporations’ decision to avoid the new day dawning for Florida tomato workers isn’t benign. Their lack of commitment means that there continues to be a market for produce harvested in fields where the basic human dignity of workers — the recognition of their creation in the image of God — is not respected. In the words of the sage Hillel, “If not now, when?”

“Food Chains” was directed by Sanjay Rawal and executive produced by Eva Longoria and Eric Schlosser (author of “Fast Food Nation”). “Food Chains” is playing in theaters around the country and is available for download on iTunes. For showtimes, please visit foodchainsfilm. Jewish resources for the film, including an action guide, are available through T’ruah. Information about CIW’s Campaign for Fair Food is available through CIW’s website.

Rabbi Rachel Kahn-Troster is director of programs for T’ruah: The Rabbinic Call for Human Rights, where she coordinates T’ruah’s partnership with the Coalition of Immokalee Workers. Since 2011, more than 50 rabbis have visited the CIW and committed to action.