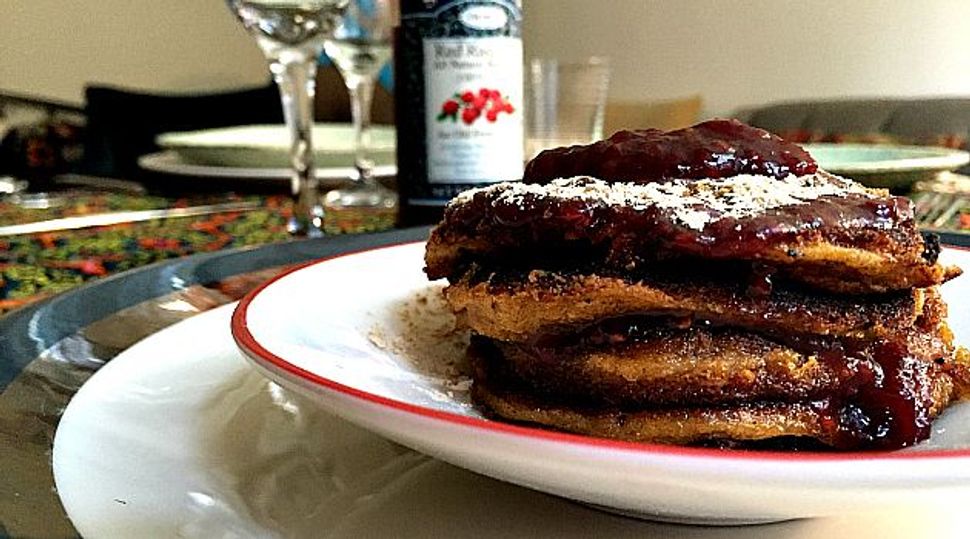 In preparation for Hanukkah, I had my heart set on creating the ultimate gluten-free and vegan sufganiyot — doughnut holes digestible to all. And, after a total of three fruitless hours waiting for my dough to rise, I should have given up. I didn’t. I formed dense little balls and tossed them into the frying pan, hoping the sizzling coconut oil and general deliciousness of the doughnuts might make up for their texture. Alas, even my teenage brother wouldn’t eat them.

I was out of time, and my brother was hungry. I had promised him a sweet, Hanukkah-themed breakfast! I make a mean latke, but Yishai had his sweet tooth set on some sugar. Then it hit me: Combine the jelly doughnut with the potato pancake. My brother and I love combining foods. We call one of our claims to fame the cawffle — part cookie, part waffle. It’s two chocolate waffles with a white, coconut cream in the middle, like an Oreo. And with that memory, the sufganiyatka was born.

The next decision I had to make was what kind of oil to use. It had to be a high-quality one. Hanukkah, after all, is a celebration of oil. I chose coconut oil, in the end, because it’s an extremely stable oil with a high smoke point. In other words, its chemistry doesn’t change when heated, like that of olive oil, making it a healthier choice. It also tastes amazing.

When it comes down to it, you may think the sufganiyatka is just another pancake — grain-free, vegan and ultra moist and fluffy one, that is. But it’s also a festive quick fix. They look great and are a heck of a lot healthier than traditional sufganiyot.

Before I let my brother taste, we had to photograph our creation. “Are these for Pancake Monthly or something?” he asked sarcastically, searching for the best angle. “Sort of,” I told him. “They’re so pretty, I don’t want to eat them,” he said. But he did — impressively quickly for an omnivore, too. Hanukkah breakfast success.

3) Heat the coconut oil in a large skillet. Begin frying the pancakes in 1-2 tablespoons of oil, adding more as needed.

4) Stack the pancakes, spreading jam in between each layer. Dust with protein powder and garnish with a dollop of jam on top.

Hadas Margulies is the food intern at the Forward. Find her at HadasMargulies.