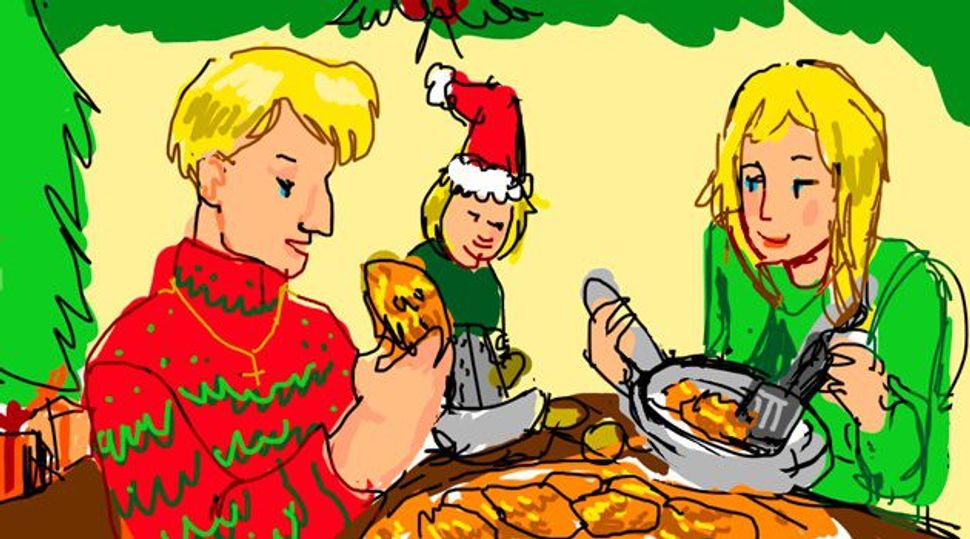 Last week, I offered some homemade latkes to my upstairs neighbor, Caitrin Kiley. As she happily ate a few (with sour cream, for which she has a slight preference over apple sauce), she casually mentioned her family’s Christmas morning tradition.

The Kileys, a Catholic family from Connecticut, have a longstanding routine. Assorted relatives sleep over on Christmas Eve, everyone gathers around the Christmas tree to open presents and then they start making breakfast, filling the house with the smell of — what else? — latkes.

How long had this been going on? I asked.

As far as Caitrin knew, her entire life.

Jewish relatives? A few, by marriage, but they don’t come on Christmas.

Some obscure Quebecois custom? Caitrin wasn’t sure. All she knew was that latkes had always been an integral part of her family’s Christmas morning.

God bless America, I thought to myself, and resolved that this merited further investigation.

Caitrin’s mother, Michelle Kiley (who likes both sour cream and apple sauce on her latkes), later told me that they’d been at it for 20 years, though she’s not certain how the tradition began. “I’m half French Canadian, so I’m Catholic. My mother is pretty much everything European,” she said. “And then my husband is 100 percent Irish — very Catholic!”

Michelle’s aunt/godmother married a Jew, and their kids grew up with elements of both traditions. “I lived with them in New York right after college, so I may have picked it up there,” Michelle suggested.

The Christmas morning latke preparations have evolved into a multigenerational affair. Michelle, Caitrin and Michelle’s mother (Caitrin’s grandmother), Donna Baker-Gilroy (who has a strong preference for apple sauce), all pitch in. When I asked Michelle about her recipe, she said, “Grate or shred the potatoes. Add some onions. And don’t skimp on the oil!”

“And where do y’all stand on shredding versus grating?” I asked. Michelle shreds them in the food processor, she said – “but they have to be very finely shredded.” Then, after a brief pause, Michelle added, “Caitrin says not as finely as yours though.” They also make a batch with no onions. “My family’s picky and weird about food,” Caitrin said. (“Are you sure y’all aren’t Jews?” I was tempted to ask.)

The Christmas morning menu, Caitrin said, is rounded out by “a huge thing of scrambled eggs and mimosas. And then we hang out all day.”

Over the phone, in the background, Michelle was saying something about the eggs. Caitrin handed the phone to her mother, who explained, “We make proper French scrambled eggs — like if you look in Julia Child — with butter and sour cream, cooked very slowly.”

Caitrin’s older sister, Meghan Cleckler, now lives in Tennessee and recently started a family of her own. A testament to the intergenerational staying power of traditions that involve fried food, Meghan won’t be in Connecticut for Christmas this year, but still plans to make latkes on Christmas morning.

I have my eye on a simple explanation for the Kiley family’s Christmas morning latke tradition: Perhaps Michelle simply has a natural affinity for Jewish food. I interviewed the Kiley women over the phone; at one point, Caitrin was in the middle of answering one of my questions when her mother, still audible in the background, announced, “Jewish food is delicious! Especially pickled things.”

David A.M. Wilensky is a freelance writer, editor and Jew. He prefers to finely pulverize the potatoes in a food processor, believes that no latke is complete without apple sauce and is currently seeking funding for his research into scientific proof that sour cream is objectively disgusting.