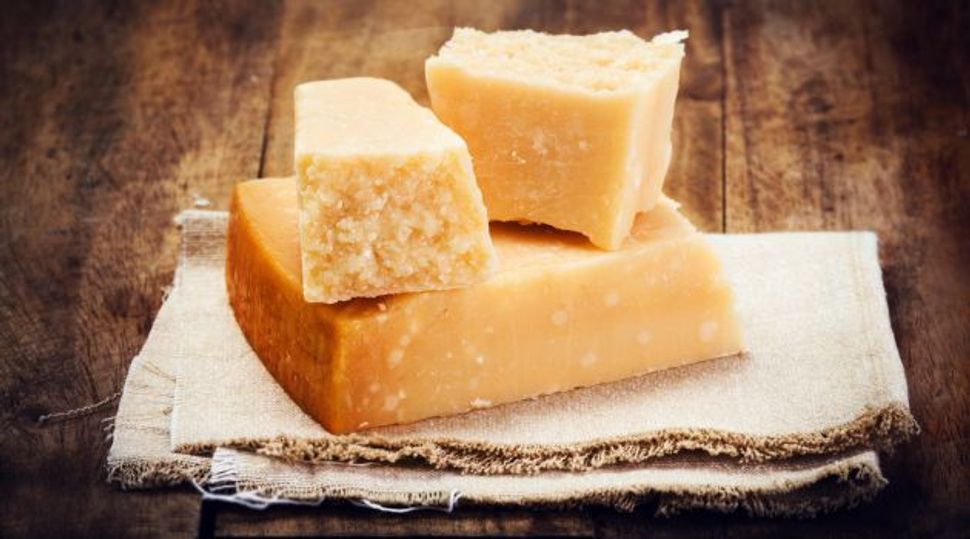 If you’ve been eating kosher Parmesan for the past five years, writes Haaretz, “chances are it’s not been the real thing.” The real Parmesan — a trademark protected both by Italian law and European Union regulations — “specifically refers to Parmigiano-Reggiano, a hard cheese produced in northern Italy according to a centuries-old tradition.” But two Italian producers will soon start producing the real thing.

The Bertinelli cheese factory announced on its website that its first kosher Parmigiano-Reggiano will be ready at the end of 2015. Caseificio Colla, meanwhile, told Italian Jewish mag Pagine Ebraiche that its first kosher formaggi will hit shelves by October. The crucial issue in the production of kosher Parmigiano-Reggiano lies in the rennet — a substance necessary to turn the milk into a hard cheese — which must come from animals slaughtered according to kosher rules.

….Breaking news from NBC’s Today show! “While some may still stereotype Jewish cuisine as the stuff of delis — a mile-high pastrami sandwiches on rye and bagels with lox — a new generation of cooks is showing the world how versatile it is.” New Orleans chef Alon Shaya is one of the kitchen stars leading the charge, Today reports.

….We caught this Toronto Star report just as Passover wrapped up, but it’s worth a read to learn more about the fascinating holiday traditions of Indian Jews — think green chicken curry, biryani and garam masala beef. There’s also a terrific recipe for spicy lamb curry from Miriam Daniels, “an Indian Jew descended from a little-known community that traces their roots back to a ship that washed upon the shores of India’s western coast more than 2,000 years ago.” Her message for Ashkenazim: “You can’t be afraid of spice. They should try every different type of flavor. If you don’t experiment, you don’t know!” Amen.

….If you find yourself in the Nicaraguan beach resort of San Juan del Sur with an implacable craving for kosher falafel, you’re in luck. [Chabad][3] emissaries have just opened a beachfront stall hawking its version of the Middle Eastern staple for about $4, reports the Tico Times. The Spanish word for falafel is… falafel.

….“Frankly, there is no excuse for why, after three years, the Dodger management can’t accommodate the religious dietary needs of its Jewish and Muslim fans,” writes Los Angeles sports fan Michael Berenbaum in the Jewish Journal. Berenbaum’s mad as hell about the lack of kosher and halal stadium food, and he’s not going to take it anymore. Eleven major-league teams offer kosher options at their local venues, Berenbaum writes, including the Cleveland Indians, Kansas City Royals “and even the hated San Francisco Giants.”

….Before Mildred Covert, kosher-keeping Jews in New Orleans had to grit their teeth and turn away from cooking that is “arguably the most treyf in America — a cuisine based almost entirely on shellfish, pork and a host of other un-kosher monstrosities.”

Covert’s widely credited with adapting New Orleans dishes like seafood gumbo, hog’s head cheese, alligator po’ boys — dishes that turned observant Jews pallid from digestive horror for generations” — into palatable food for kashrut-watchers. And Vice’s Munchies blog has got a fascinating profile of this culinary pioneer, now 87 and confined to an assisted living facility. “If I did nothing else, I think I made this city realize that there were Jewish people here. That, to me, means a lot,” Covert says.

….Eater tips its hat to two Jewishy restaurants this week. Atlanta’s “upscale Jewish deli concept” The General Muir earns a spot on Eater’s list of the city’s best restaurants. Eater raves “the burger is one of the best in town, but other star dishes include the poutine fries, cheesecake and sandwiches with reuben and turkey.” And Brooklyn’s La Vara snags a spot on Eater’s list of the city’s 38 most essential restaurants, for “Alex Raij and Eder Montero’s unusual mix of Spanish, Moorish and Jewish cuisines. Standout dishes include the anchovies with sesame and hazelnuts, the stuffed rabbit loin, the lamb meatballs and the seafood-studded fideua.”

….If bar-mitzvahs were always catered like this, we’d actually eat. The Workmen’s Circle has lined up an artisan-Jewish-food who’s-who for Party Like It’s Your ’90s Bar Mitzvah, a retro-themed bash whose proceeds benefit Workmen’s Circle programs. On the menu: Hip Hebraic grub from Shelsky’s of Brooklyn, Gefilteria, OddFellows Ice Cream, and Brooklyn Seltzer Boys — “modern twists on a classic bar-mitzvah menu”, according to the invitation. It all happens April 25 at Brooklyn’s Roulette, and there’s no Torah-portion memorization involved.