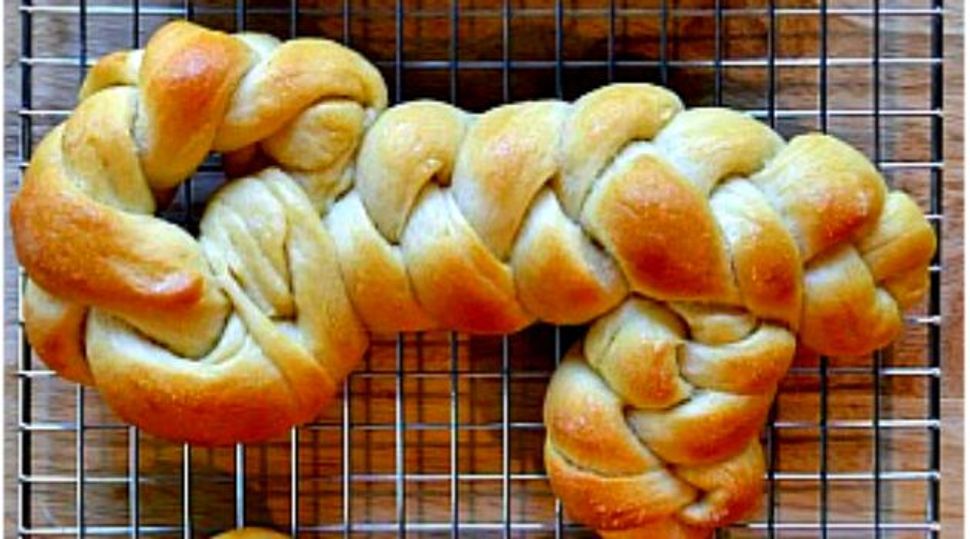 Bread has been on my mind lately…

It seems there’s nothing like a week of absence to make my love of complex carbohydrates grow stronger. As we begin counting until Shavuot, many will think of dairy products as the food of the season. But it is bread, in fact, which links the two holidays. This Sabbath in particular, the first Shabbat after Passover, has a special — and controversial — bread associated with it.

Each stage of the Exodus story has its own kind of bread: Passover begins with the consumption of matzo, the classic symbol of the holiday, and the wandering Israelites in the desert were fed by manna, or “bread from heaven.” Once they entered the Land of Israel, though, Passover marked the beginning of the barley harvest. The Israelites were forbidden to eat the newly harvested grain until the first sheaf of it (omer) had been offered to God by the priests (Leviticus 23:14).

From that day, the Israelites were commanded to count seven weeks until the Feast of Weeks, Shavuot, for which they must offer two loaves of bread (Leviticus 23:17) — the only offering that includes leaven (chametz), normally banned from the altar (Exodus 34:25). Thus we are now in the middle of a single, unified period of transition, from Pesah through the Omer to Shavuot, from grain to bread, from Exodus through the wilderness to Sinai.

The transformation from grain to bread is a complicated process. The Talmud records (Berakhot 58a) that Ben Zoma used to say with gratitude, “How many labors Adam had to carry out before he had bread to eat! He ploughed, sowed, reaped and bound the sheaves, he threshed and winnowed and selected the grain, he ground and sifted, kneaded and baked, and then at last he ate; whereas I get up, and find all these things done for me.”

It takes a great deal of human effort to make bread. When we say the traditional blessing over bread — “Blessed are You, God, Ruler of the Universe, who brings forth bread from the earth” — we are actually misquoting from Psalms 104:14, where it says that God “makes grass grow for beasts, and grain for the work of people to bring forth bread from the earth.” Unlike the manna, “bread from heaven,” the bread we eat comes from the earth — and not ready-made. God may make the wheat grow, but people are the ones responsible for turning it into bread. Thus the grain-to-bread process becomes, for the rabbis, the quintessential symbol of what it means to be in active partnership with God.

This is encapsulated in a midrashic parable (Seder Eliyahu Zuta, chapter 2): A king had two servants and gave each of them a basket of wheat. One servant made flour from the wheat, sifted it, ground it, kneaded it, baked it and set the bread on the table; the other did not do a thing. When the king returned, he praised the first servant for making such intelligent use of his gift, and chastised the second. So too, the midrash concludes, “when the Holy Blessed One gave the Torah to Israel, it was given as wheat from which to make bread.”

As we move towards Sinai and the receiving of Torah, we are encouraged to take up our end of the bargain: a model of human-divine partnership, of revelation as conversation, of bottom-up initiative. God presents us with the Torah, and we choose to accept it and to continue working with it, chewing it over, making it digestible. Bread represents our commitment to the productive use of our gifts; the responsibility to work towards improving the world we were given.

And that brings me to the special custom that relates to the challah for this Sabbath, the first challah after Passover. It’s called “key challah,” or shlisl khale in Yiddish (from the German schlüssel, or ‘key’). There are different variations; some have the custom to bake the challah in the shape of a key, or with an image of a key on top; while others actually bake a key under, on top or even in the challah. One of the earliest descriptions comes from Avraham Yehoshua Heschel (the great-great-grandfather of the similarly-named theologian Abraham Joshua Heschel), an important Hassidic rabbi from late 18th-century Poland, also known as the Apter Rebbe. In his book “Ohev Yisrael,” he adds a comment after his explanation of parashat Shemini: “On the Shabbat after Passover, there is an old custom to imprint the challot with keys, and make the shape of a key on the challah.”

For the reason, he says, we need to turn to the book of Joshua. The Israelites have just crossed the Jordan river; we have finally arrived at the moment we’ve all been waiting for, the completion of that long process that began so long ago with the Exodus from Egypt. At Sinai, they were still in the wilderness. When the Torah ends, they are still in the wilderness. They don’t actually enter the Land of Israel until the book of Joshua. And when they do, they do something very interesting: “they celebrated Passover, on the evening of the fourteenth day of the month in the plains of Jericho” (Joshua 5:10).

Here we have the movement from human passivity and complete reliance on God towards productivity and involvement in their own liberation; as the Apter Rebbe says, “they now needed parnasa.” Parnasa is more than just ‘making a living,’ financially speaking; parnasa for the rabbis is the concept of self-sufficiency, that every person has the ability to be a contributing member of a community, that they can create things, that they can support themselves, their community, a family… Parnasa is about taking wheat and making bread. And since everything has a gate, the Apter Rebbe concludes, the key represents the opening of the gates of parnasa.

It’s true that some rabbis opposed (and still oppose) the custom of shlisl khale as a meaningless superstition, possibly even derived from non-Jewish custom. (Many European traditions serve an elaborate Easter bread around this time of year, commonly marked with a cross.) Others decry the practice of hoping for a segulah (omen) to open the gates of parnasa instead of working for it ourselves.

But for me, this is precisely what shlisl khale teaches us. The movement from manna to bread, the movement from Egypt to Israel and the movement from Passover to Shavuot are all linked through the commitment to human activity. I’m putting a key on my challah this Shabbat to remind myself of that moment, that first communal moment where we stopped waiting for bread to fall from the skies and started making it ourselves — and perhaps to remind myself that the keys to those gates may be in my hands.

Noam Sienna is a Jewish educator, foodie and graduate student in the Department for the Study of Religion and Centre for Jewish Studies at the University of Toronto.