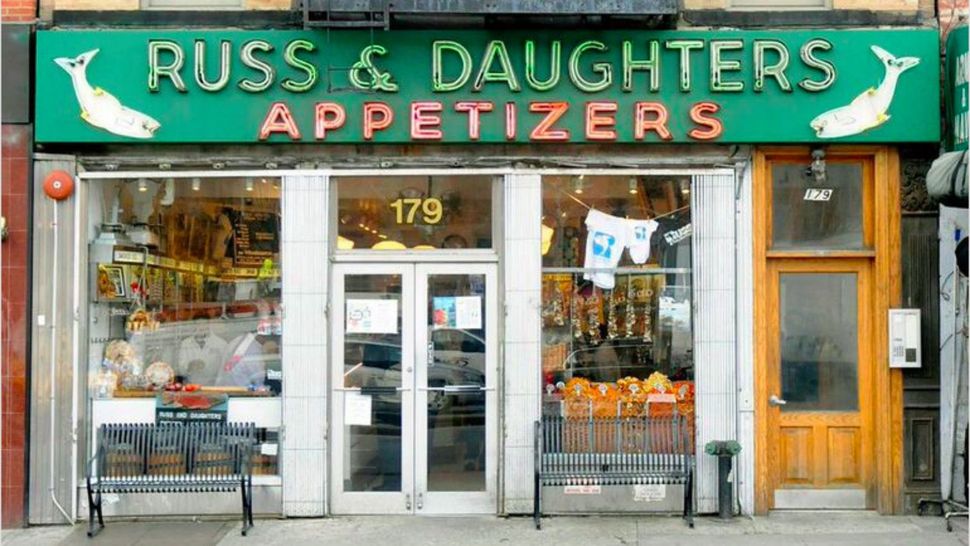 Tuesday night I found myself noshing on a piece of rye bread with cream cheese and thinly sliced smoked salmon from Russ & Daughters while gazing up at four giants of New York’s Jewish food world.

I was at at the 92nd Street Y, where the all-star panel consisted of Mark Federman of Russ & Daughters, Avram Isaac of Isaac’s Bake Shop, Jake Dell of Katz’s and well-known author and food critic Arthur Schwartz. Moderator Leonard Lopate of WNYC led the crew.

I had spoken to Schwartz a few days before the event, and was excited to listen to the panelists schmooze. I was ready to learn some history about the Jewish delicatessen in New York City, and hopefully to get some tips about the best places for classic Jewish food.

I didn’t exactly get a history lesson – instead, I felt more and more like an insider as the foodies spoke about the evolution of the Jewish deli. In response to a question from Lopate about making adjustments to modernize Russ & Daughters, Federman said, “You can’t keep up with all traditions – you have to change depending on peoples’ taste patterns.”

Jake Dell, who has been in charge of Katz’s since 2009, agreed with Federman, using as an example the decision to make Katz’s a 24-hour store in order to cater to the bustling nightlife of the Lower East Side.

All the panelists agreed that a major reason for the decrease in the number of kosher delis and bakeries is that there are so many more dining options in New York City than there were when Yiddish was the language spoken on the Lower East Side. Plus, as Schwartz noted, it’s often more convenient for people to “buy boxes” of baked goods at their local supermarkets than to go to, say, Isaac’s Bake Shop on Avenue J in Brooklyn.

Lopate kept returning to a question I had hoped the panelists would address: Are Jewish delis and bakeries a “dying tradition”? To the audience’s relief, the answer was a hard “no”. I thought Federman captured the sentiment perfectly when he described what he called “Jewish soul food.” He was talking about the items we go back to. He said, “What matters isn’t what food it is, but where you’re buying the food….It’s a different experience when you go to a counter at a deli and the counterman calls you by name and asks how your daughter is… and everything is done by hand. That is soul food.”

His soliloquy received a heartfelt round of applause.

As I sat savoring my second helping of smoked salmon — noticing that I was by far the youngest person in the room, save for 27-year-old Jake Dell — I felt a strong sense of purpose. It is now up to my generation to help keep the food of our grandparents and great-grandparents alive, to perhaps forgo the supermarket on the corner that will doubtless have bagels and lox, and venture out of borough for the real deal.

Jean Hanks is food intern at the Forward.