A Stirring Memoir, With Recipes 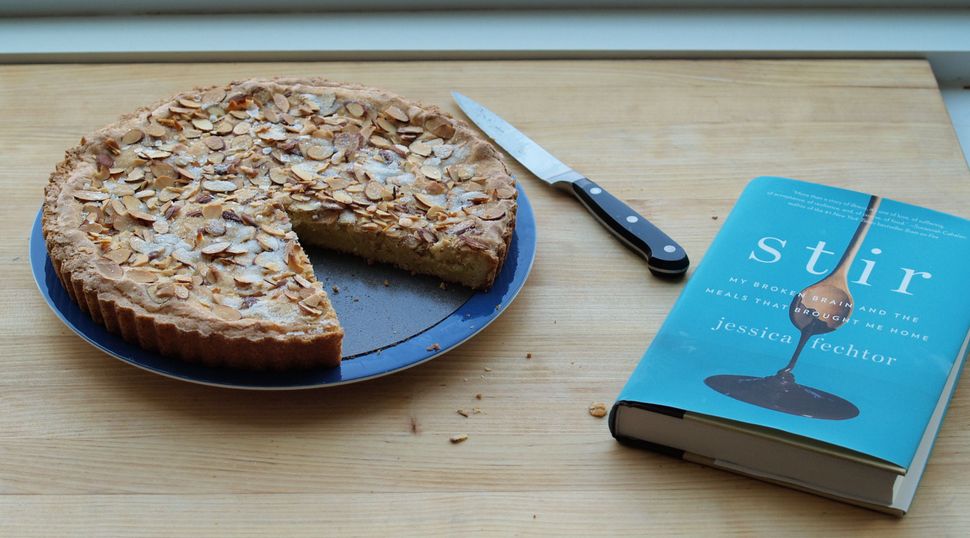 The that inspired Jessica Fechtor’s blog, Sweet Amandine, next to a copy of her new memoir, “Stir.”

For a while, Jessica Fechtor — author of the just-published memoir “Stir: My Broken Brain and Meals That Brought Me Home” — was two people to me. The first was the unnamed graduate student, part of the Jewish community in Cambridge, Massachusetts, where I’d just moved, whom people spoke about in hushed tones. “She had a brain aneurysm,” one said. “She almost died,” whispered another. “We’re praying for her.”

The second was the author of Sweet Amandine, a food blog launched around the same time as my own, a vibrant on-screen persona who, early on, wrote about toast from her favorite bakery and polenta that “ploops” (you read that right) when it’s ready. “Oh, you write a blog?” those same people in the community said to me. “You should really meet Jess.

When we finally did meet, at a Shabbat lunch, her fragile head encased in a helmet decorated with colorful stickers, I encountered Jess’s two selves merged into one person, and got to know her for real. “I’m studying Jewish literature,” she said, introducing herself. She had also made the challah. A few months later, we met up at Hi-Rise bakery over almond macaroons (the recipe is in the book) and talked about blogging and life. She gave me a few tips about finding the light in my apartment.

In “Stir,” Jess talks about what it means to be a host and what it means to be a guest and how important it is to care for people and let them care for you. I’ve had the fortune of being a guest in her home, of eating with Jess and her husband Eli at the red wood table by the window, where so many of her early photos were taken. I had the pleasure of hosting her, and, when I served up a cake that had utterly failed, she generously ate most of her piece, gently offering suggestions when I asked for help. Jess hosts well and she guests well.

Reading the book, I was compelled to reach for a pen every few pages, to underline things I didn’t want to forget — things I had to remember. For example, she writes: “Home is a verb. It’s not only where we live, but how. I learned this as a little girl from Amy [Jess’s stepmother] by watching her in her own home — especially in the kitchen… To cook, Amy taught me, is only to help our ingredients down the path toward becoming their truest selves.”

It was with Amy that Jess first made Marcella’s butter almond cake, the namesake of her blog. This thin, dense cake bakes in a fluted tart pan and the edges harden like my favorite part of a brownie. Since it uses melted butter, I asked Jess whether one might substitute oil to make the cake parve. She was resolute: “The parve cake thing. I feel strongly about this. My answer to you is no.” She continued, “it just doesn’t make sense for me to take something that the main point of it is the buttery flavor, and to replace it.” Though she does sometimes substitute a delicious tasting fat — olive or coconut oil — for melted butter in other recipes, in this cake Jess lets butter and almonds shine; in this recipe, they are their truest selves, maybe even better.

Jess studied music and English in college and then spent time at Oxford and in Israel deepening her love for language through the examination of biblical and then modern Hebrew. She told me about a class at Oxford on modern Hebrew and Yiddish that really turned her on: “This idea of these languages that were coming back to life, or were being reinvented for a modern literature, and all of the challenges that the authors faced that were pretty exciting in terms of taking a language that has its limitations and making something out of it. That was just so cool to me and that’s when I though that maybe I want to go on and keep studying this.” She was talking about Jewish languages, but she might as well have been talking about the language of food and of life.

Indeed, Jess returned to the U.S., taught fifth grade in a Jewish day school in Seattle, and then moved east to start a PhD in Jewish literature. She was on a trajectory to academia when she suffered the aneurysm and began her journey back to health, and towards a new life.

Fast forward a few years and Jess has moved to San Francisco with her family. She and Eli now have two daughters, Mia and Freddie, who kept popping in on our conversation as Jess packed for her book tour.

“My big sweetie just came in,” Jess apologized, her voice softening. She’s looking forward to getting back to her dissertation, she said, but the topic has now changed. She’s forming a new committee and writing a prospectus about representations of food in Jewish literature. As she told me this over the phone, I could hear her smile: “Ohhhhh yeah, better, right?”

Through her book and her blog, Jess told me, she learned that she loves writing and wants to keep on doing the non-academic kind. She plans to write her dissertation “so that it’s a foot in the academic world and a foot for popular readership.“

In speaking about the power of words, Jess straddles academia and life: “Resurrecting a language was very much about resurrecting parts of Jewish identity that they thought were very much in need of bringing back to life. And I think the same kind of striving that happens in that writing, that’s what we do. We put words on the page, we’re figuring out who we are.”

A Stirring Memoir, With Recipes